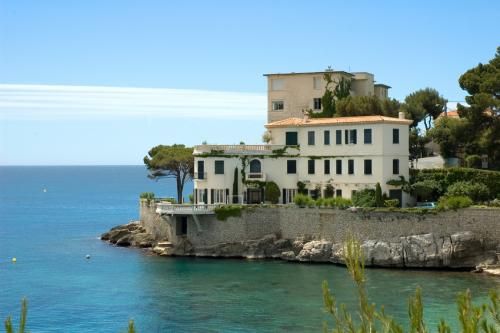 A vacation in Tuscany! Which is better, doing this, or owning a Jet Ski? Many Americans believe that owning things is an end in and of itself. And given our consumer culture, cued by the TeeVee, it is not hard to understand why...


Doing things is better than Owning things. It can take a long time to figure this out, and many Americans never figure this out. Our culture promotes owning things as an end in and of itself.   If you want to be happy, you need to own things - a house, a car, a boat, a stereo, a big-screen TeeVee, a new iPhone, whatever. If only you can OWN more, you will be happy!

And the consumerist cult promotes the idea that you should build your own personal identity around ownership of things . Harley-Davidson was one for the pioneers in this field, with their "Live to Ride, Ride to Live" mantra.   Think about this for a second.   What are they saying?   That, but for your urge to ride a motorcycle, you'd succumb to your other instincts and slit your wrists?

Well, that's pretty much what they are saying.  One wonders if the new bikes come with a built-in Prozac dispenser.

Here's the deal.  I hate to be the one to break this to you, but a motorcycle, of any brand, is just a piece of transportation machinery. And once you've ridden one for a few years, chances are, the mystique and thrill of it will start to wear off.   And of course, the manufacturers don't like to hear that.

So on websites and chat rooms, as well as t-shirts, you'll see written "I'll NEVER sell my bike!" - which is an easy promise to make when you are 28.  But times change, and it is OK to change too.   If something isn't appealing to you anymore, get rid of it.   Being a slave to a piece of machinery because some other doofuses are sucked into a marketing slogan as a religion is just silliness.

And there is no particular mystique or mystery to a Harley, either.  Once these became wildly popular in the 1990's, several manufactures got into the business, including Polaris and Indian.  If you want to think that making a V-twin motorcycle is somehow magic that only occurs in Milwaukee, knock yourself out.  But it is just a manufactured good, period.

Jeep has tried recently to latch onto this idea.   They have a new slogan that says something stupid like "I am what I drive.... drive to live....Jeep" or some other nonsense.  It's just a car, really, and 95% of them never go off-road.  But you can sell the image of ruggedness to people and get them to think that signing the papers on a car loan is a "lifestyle statement."

And people fall for this, hook, line, and sinker.   They wear hats, shirts, and jackets emblazoned with their favorite trademarked brand. They even get themselves tattooed with trademarked corporate logos.  How pathetic.  And a little scary, in a 1984 kind of way.  People willingly branding themselves with the name of a corporation!  What's next, bar codes?  Oh, wait.

The problem with owning things, is that after a while, they tend to own you.  And if you are burdened with payments for "toys", then you can't go out and experience life.   They take up all your free time, and in order to justify their exorbitant cost, they have to take up all your free time. And with machinery, you can't just let it sit for days, weeks, and months.  Once you stop riding the bike or the jet ski or whatever, it quickly starts to fall apart.

This is not to say there is anything wrong with trying these things out. Just don't let them run your life.  Don't make silly promises like "I'll never sell my...(fill in the blank)" because you will eventually sell it, or your next of kin will.  And it's perfectly OK to decide you've been there, done that, and to sell your toy and move on.  In fact, it is BETTER to do so.

Why? Well, for starters, it means you can try and do other things in life.   If you are locked in to being the "Jet Ski Guy" for the remainder of your days, it limits your options.  And let's face it, you lose interest in Jet Skis pretty quickly (it took me about all of an hour).

And this is normal. We get older. We grow up. Our interests change over time. Only shallow, superficial people find the same thing fascinating for years on end.

And for many people, this is puzzling. After all, the magazines, books, movies, television ads, and entire subculture tell you that this is the most important and interesting thing you can do.  So if you are not finding it endlessly fascinating, there must be something wrong with you.

Or maybe, just maybe, you are starting to see through the hype and realize that owning a Motorhome, Harley, Boat, Jet Ski, Computer, Ski Chalet, Hot Rod, or whatever is not all it was cracked up to be, and that once you've done it 100 times, you've basically seen all there is to see.

As I noted in my Hobbies entry, one problem many people (mostly men) have is, that they think that if only they "upgrade" to the next level, perhaps their interest and love affair with the hobby will rekindle. So they get the "ultimate" motorhome, bigger motorcycle, or the larger boat, or whatever, hoping it will be new, exciting, and different.

And what they discover is that it is just more expensive.   The initial thrill of riding a motorcycle for the first time, or that first camping trip in your first camper, or your first weekend boating - that never comes back the same way.  And in fact, having the "fat daddy" ride ends up being less interesting than being young and experiencing things for the first time.

And there's the key - experiencing things for the first time.  You are never going to get a thrill doing the same thing over and over again.  And yet I see this all the time in hobbies.  "We've been coming to this (bike, car, boat, airplane) convention for 20 years!" says one old-timer.  And after going for a couple of years, I have to wonder why. Y ou end up seeing the same things and even the same people, over and over again.

In any hobby, there are some folks who want to "rise to the top" by trying to outlast everyone else and becoming "Joe Expert" in the field.  While such folks can be a good resource, they often are annoying as all snot, as they take it as their mantle to shout down anyone else entering the hobby.   It irks them that some newcomer is actually having fun, dammit! This is serious stuff!

If you see yourself becoming that person, that is a sure sign it is time to put all your junk up for sale and move on.

I've had a lot of toys in my life and, after a while, I've sold them and moved on.   In every instance, there was some misanthrope in every enthusiast group who considered himself "expert" in the field and was annoying to be around.  There was a Mr. Fiat, a Mr. Ural, a Mr. BMW 2002, a Mr. Bayliner - the list goes on and on.  These were annoying people who considered themselves "experts" at the hobby and proclaimed their undying loyalty to a brand (Fiat? ouch!) and said they'd "never sell" their fill-in-the-blank.  People who own one kind of toy, and declare their undying loyalty to it for life.

Sorry, but I'm not that shallow. They're toys, not a religion.  Play with them, and then leave them in the sandbox.  Move on with life - have new experiences.

When the time came, I sold the Fiat, the BMW, the motorcycles, the boat, the motorhome, the antique tractor, the 1948 Willys.  They were fun to have, but once they reached the point where they seemed to be owning me more than I was owning them, it was time to liquidate and move on.  And by doing so, I was able to cash out and in some cases, actually make money. "Hanging on" out of pride only results in losing what little equity you might have left.

At this stage in my life, facing retirement, I realize there are many things in life I would like to DO. Some people call this a "bucket list" - whatever.  The point is, you can't DO all these things if you are tied down to OWNING things - at least not and also stay solvent.

I would like to work less, save more, travel and do things.   I want to take a canal barge cruise through France - but I don't want to OWN a canal barge, thank you.  I want to take a bicycle tour of Tuscany, but I don't want to OWN a $5,000 road bike and be "Mr. Bicycle."   I'd love to rent a vacation home - anywhere in the world.  But owning one?  No thanks! (See my posting on owning Vacation Homes - the best way to ruin a good vacation!).

Americans are obsessed with owning things, and that is unfortunate.   It is OK to rent an apartment rather than own a Condominium.  Frankly, I'd rather deal with the experienced dictatorship of a landlord than the amateur one of the Condo board.  Who in their right mind wants all that negative energy?  It just sucks the life out of you.

Over the last year, we've sold off a lot of our toys.  And it was a good feeling to let them go - and to see someone else enjoy them.  We will keep our 26-foot Bayliner for a few more years, and it will go away when we sell our home up North.  And the BMWs, which are fun and all, well, they will go away someday, too.  Our 10-year plan is to enjoy what we have, but to start positioning ourselves for the inevitable downsizing - and then go out and have fun DOING things!

You see, "He who dies with the most toys" doesn't "win" anything.  He just leaves a lot of rusty junk for his widow to sell for pennies on the dollar.   Equipment, homes, cars, and other "things" should be enjoyed, and then liquidated once the fun is wrung out of it.   But moreover, you shouldn't lose sight of the fact that things are not an end in and of themselves.  What you DO with them is more important than the mere ownership of them.  And if you find yourself doing less and less, well, then maybe it is time to move on.

You are not "quitting" or "giving up" by moving on from a hobby when you lose interest in it, you are being smart.