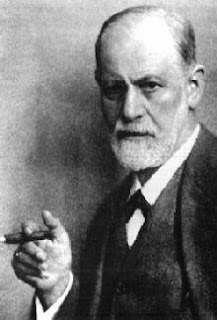 Dr. Sigmund Freud was a pioneer in the field of Psychiatry, although most of his theories have since been decried as bunk. Will we say the same things about today's practices in 20-30 years?


Psychology and Psychiatry are interesting fields, in that they both try to plumb the depths of the human mind, using the human mind itself. The concept of human beings trying to understand the workings of their own minds appears to me to be the most daunting task possible. The basic questions in life - What is existence? What is consciousness? What happens after we die? - have never really been fully answered by science and likely never will. Many have a belief in a religious answer, but as I have noted before, beliefs are based on blind acceptance of an answer, not analytical reasoning.

So in a way, these fields are almost set up for failure from the get-go, in my opinion, as the idea of a human mind understanding fully the workings of itself, is largely folly. It would be like a toaster understanding its own internal schematics.

This is not to say the fields are not without merit, only that they are attacking a problem that may not be solvable, at least in our lifetimes. To truly understand the workings and design of every aspect of the human brain would require more data than would fit into a human brain. In other words, it might not be do-able. You might be able to figure out some basic architecture and operations, but never truly understand things like "what is consciousness?"

And like any science, it evolves over time, so theories and practices of even a few decades ago are found to be obsolete or even horrifying today. Freudian dream theory has been dismissed by most modern practitioners as specious. And medical practices such as electroshock therapy and frontal lobotomies are viewed today on a par with medieval tortures.

What we were so sure of as "science" back then, turned out to be little more that guesswork - monkeys working on computers with hammers, finding that, on occasion, a good whack with a mallet seemed to do something. But it was hardly science, and more like cruel torture.

Even worse, things such as aversion therapy, which have been used up until very recently (I have met victims of this "therapy") were used to try to "cure" people of "maladies" by applying negative stimulus (electrical shocks) when exposed to "negative" images. For example, young men were supposedly "cured" of their homosexual tendencies this way - although the cure really never took.

And while it was trendy in the 1960's and 1970's to say you've been "seeing an analyst," today, the serious realities of mental health have made therapy less of a status item. The idea of talking problems to death never seemed to actually accomplish much, other than to generate billables for the Psychologists involved.

So what's wrong with Psychology and Psychiatry? The Scientology people certainly have an axe to grind with them - perhaps because they don't like the competition. In a way, many folks have made a quasi-religion out of mental health professionals, treating them much as we used to treat traditional clergy - as the confessor, counselor, and spiritual guide. As I have noted before, some folks make a hobby out of their mental health issues - which is probably not constructive.

The problem with the Disease Model, is that it uses social norms - cues if you will - to decide who is "normal" and who is "abnormal". And as social norms and cues can change over time, or in different circumstances, what is considered a Disease in the past may be considered the norm today.

Think about this - suppose your doctor suddenly decides that being riddled with cancer is not something you need to treat, but is a normal, healthy condition? You might be a little skeptical of the medical profession, if that was the case.

And yet in the field of mind-science, the "diseases" of the past are now considered "norms" today. Until about 1970, Psychologists considered homosexuality a form of mental illness. Today, it is considered a social norm. What has changed? Did they find the cure? No, rather, they decided the disease was actually a "norm" that did not need treatment. Now the same doctors are saying that fear of homosexuality is an illness. Do we believe them, or perhaps this is also part of the spectrum of the human condition?

And that's the rub. Probably every form of mental illness is actually a "norm" in one environment or another. And throughout history, people's behaviors and actions outside of the social norms are often what makes history - and may be survival skills for our species.

Joan of Arc? Probably schizophrenic, we think today - hearing voices, thinking she was talking to God, not to mention a martyr complex. Would the world have been better off if she was on Prozac or anti-psychotic medications? I have no answer, but it is an interesting question.

Bipolar disorder is another tough one. Many, if not most, of the great leaders throughout history had manic and depressive phases. Where would we be today if Winston Churchill decided to check himself into a sanitarium? (conversely, where would we be if Hitler had? It cuts both ways I guess).

I work with a lot of inventors, and they all tend to be this way. Can you imagine what the world would be like if Bill Lear or the aptly named Madman Muntz had been on tranquilizers? The world would be a sadder, grayer place.

Kinsey tried this approach - arguing that all human sexuality was basically "normal" in a Quantum sort of way. He was, of course, shouted down, and even the behavior of those shouting him down was probably a norm as well. For every Ying, there is a Yang.

Human behavior takes on all sorts of odd forms - and many of these forms may be survival skills in certain situations. If you ran down the street shooting at everyone you saw, they'd lock you up, under ordinary circumstances. But in wartime, they'd give you a medal. What is "abnormal" behavior in one set of contextual cues is normal in another. And switching between the two can cause undue stress.

Normative cues make all the difference. We tend to condemn German soldiers in World War II for claiming they were "just following orders." But in fact, they were, and under the same circumstances, under the pressure of the same normative cues, you and I would probably do the same. There is nothing inherently evil about Germans, it was just the societal norms that were created at the time.  And Psychological experiments have proven this to be true.  Put people in a position of authority over others, and then give them orders to do odious things, and they will do them.  Whether they are students in a experiment or soldiers of the Wehrmacht.

Now granted, these norms were created by people who are what we now refer to as sociopaths (a label, yes, but a convenient one). And sociopaths probably serve a survival instinct to the human race as well. Somewhere during our long history on this planet, one caveman probably realized that instead of struggling for food on a daily basis, it would make a lot more sense to just club his neighbor over the head and take their food and possessions as his own. The first sociopath? Perhaps. But he survived to reproduce, and that's the key.

His behavior became a new norm, and throughout history, people have exploited, used, and abused other human beings, and many, if not most of these people we refer to as "normal" or "successful businessmen".

They key is to make the behavior fit the norm of society, to make it "acceptable" in the proper context. And that is where the field enters a slippery slope. By trying to get people to conform to a "norm", are we dictating norms, or enforcing societal norms? And who decides what is that norm? As we have seen in the past, this is a tricky problem, as merely assuming existing social norms are "healthy" is not really a good answer. What seems like outlier behavior in one era or context, becomes the norm in another. Trying to steer or direct norms may result in a less optimal outcome for society at large.

Today, pharmaceutical companies dominate the landscape in both the medical and mental health fields, and to some extent, they are directing societal norms in pursuit of profits. Answers to all of life's little problems can be found in a pill. Granted, there are some people who desperately need these medications - and are often the ones least likely to take them or the first to stop taking them. But increasingly, it seems to me, many folks are reaching for an answer in a pill that may not really help them, but merely anesthetize them.

My late Mother fell into this trap. She was a closeted Lesbian for most of her life - in an era where being a Lesbian was not a social norm. As a result of the disassociation between her own values and that of society at large (or at least as it was perceived) it made her a little crazy. At the time, the "solution" was "analysis" and tranquilizers. Neither worked. She traded an uncertain life outside of the social norms for a bottle of pills and an attempt to "fit in" with normative society. It didn't work, of course. She didn't fit it, was not accepted, and ended up a very unhappy alcoholic.

And at that time - in her era - there were women who had the courage to live outside of societal norms and rather than try to "fit in" told society to "take a hike" and lived their own lives. Granted, they had to be careful back then - you literally could be committed for such behavior. But it took a lot of courage to do that, and the pill approach, I think, tends to dampen courage and exchange a scary unknown for a soft, pillowy, but certain (an unhappy) existence.

And I suspect her story can be repeated a million times or more. People who feel they need to conform to societal pressures - from their parents, their school, their teachers, employers, friends, and even people they see on the street. And convinced they are "abnormal", abandon their own internal compass in exchange for an ersatz societal one.

And I doubt that approach ever works. Because no one really lives according to the norms of society. What you see on the TeeVee is basically all a fraud, a lie, an advertising man's nightmare. Trying to live that life will make you only broke, unhappy, and fat. And yet many people chase after that false God for most of their lives, simultaneously decrying anyone who fails to follow the norm as "weird" or "strange" or "crazy."

I suspect in 20-30 years we will look back at the mental health medical practices today and chuckle at our naivete over some things and recoil in horror over others, much as we do today when reviewing the practices of 30 years ago.

Placing blind faith in Science is never a good idea, as Science is not faith-based.
Newer Post Older Post Home