Note: This is a cross-posting from my companion blog, Losing Weight Now! 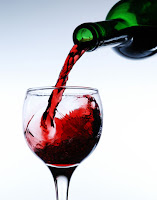 A glass of wine with dinner is a fine thing, but alcohol, particularly in large quantities, is just empty calories.
If you have read this blog (brave soul!) you will note that a cocktail or glass of wine appears regularly in my diet - like on a daily basis. Alcohol, make no mistake about it, can be bad for your, both physically and emotionally, particularly over time and particularly if taken regularly.

And the problem with alcohol use in this country is that there are three levels of it: Tee-totallers, usually of a religious bent, so-called "normal consumers", which can include a lot of people who are hurting themselves with booze, and finally, the "alcoholic" who attends 12-step programs and is a total washout in life.

And that is the interesting thing about alcohol use in America. The normative cues are skewed horribly wrong. You have three choices, essentially, to be (a) a religious crackpot who doesn't drink, (b) a broken-down drunk who tries not to drink, or (c) a cool, urbane hipster who enjoys a cocktail at 5 o'clock.

And the problem lies, to some extent, with Alcoholics Anonymous. This is an organization with the worst marketing plan ever known to mankind. According to AA, the only way anyone can give up drinking is to hit "rock bottom" and lose everything that is important to them in life - their spouse, their friends, their job, their home, their savings - and then "rebuild" themselves through the AA program.

I say this is bad marketing as this excludes a lot of people who maybe would like to give up drinking (or drink less) but haven't hit "rock bottom". If you tell people that alcoholism is characterized only by stumble-bums in the Bowery, then people who are alcoholics don't see themselves in the picture, until it is too late.

The second problem with AA is that it is, essentially, a religious cult. Yes, you heard that right. And a big part of the cult is the "rock bottom" concept. You see, in any cult or organization that tries to make-over people in their own image, a big part of the indoctrination, training, or "programming" is to crush the ego and then rebuild it. The military understands this and uses this technique in basic training. Classic religious cults use this, to crush the identity of the recruit, forcing them to sever all ties with their past life, only to rebuild a new identity in the cult.

AA's message is this: You have to hit rock bottom before you can quit drinking. You have to follow their program - and only their program, because nothing else works. You have to attend AA meetings for the rest of your life. Sounds a lot like a cult to me.

This is not to say the organization doesn't help a lot of people. The folks who truly ruin their lives through drinking and hit "rock bottom" can find help there. But I know a lot of functional alcoholics out there who haven't hit - and will never hit - "rock bottom" in their lives. They are financially successful and secure and happily married. They just like getting shitfaced all the time, which is not good for your liver or kidneys - or a whole host of other organs.

According to AA, these folks don't have an alcohol problem - since they have not hit "rock bottom" - although they likely could not stop drinking if they wanted to. And most of them don't consider their drinking to be a problem, although it may be readily apparent to others.

Doctors take a different view of alcohol consumption than AA. Continued regular use of alcohol can be problematic and bad for your health. You don't need to "hit rock bottom" in their view, to have an alcohol problem. If you have to have a drink every day, chances are, you have a problem with alcohol.

Here's a radical idea: How about quitting or moderating drinking before it becomes a problem in your life? Seems like a simple idea, but the AA folks say, "It can't be done!" I respectfully disagree. Many ordinary folks in this world control their levels of alcohol intake or quit drinking over time as a matter of choice or personal preference. The idea that alcohol use comes in two forms - abstinence and raging alcoholic - is rather simplistic.

And you can quit drinking or moderate your drinking, without having to hit rock bottom or attending meetings for the rest of your life.

As I have noted before in this and my companion blog, my parents were raging drunks, particularly my late Mother. Every evening, they would get into drunken shouting matches, which, to a child, can be shattering. My Brother and I would crouch down at the head of the stairs and listen, swearing to each other never, ever, to take up drinking - a promise that is quite easily broken during the adolescent years.

During college, I attended an Al-Anon meeting - an AA-type group for "children of alcoholics". It was interesting, to say the least, as it helped me understand a lot about the behavior of alcoholics. What is annoying about an alcoholic is not something you can pin down in 10 words or less, but it is annoying and distressful as all get out. And I met a lot of people there who had much worse problems than me.

One girl, nearly 30, was struggling with the issues of her alcoholic parents - while still living at home! "Move out of the house!" was what we all shouted. Be she was stuck in stasis, like a deer in the headlights, not realizing that the single best solution to her parent's drinking problem was to walk away from it and stop being an audience for their lives.

Another fellow at a meeting introduced himself as "Hi, my name is Jake, and I haven't had any heroin in six days now" (Narc-anon is down the hall, Jake!).

I realized then, that my problems with my parent's drinking were minor, and the best thing I could do was to move on with my own life, rather than to continue to be an audience for theirs. And so many children do this - into their 40's and 50's and beyond.

The other thing I learned, on the wise advice of a counselor there, was that while I could not control my parent's drinking, I could control my own. As a teenager, I would try to hide the car keys when Mother was drunk, or water down the Vodka (activities that ironically my Father would parrot later in life, as he became the sole audience for her life) in fruitless attempts to limit the madness. Of course, it didn't work, and family gatherings and even dinners would devolve into drunken shouting matches or crying jags.

But if I was sober during these events, I would have the wherewithal to realize what was going on and leave. So for nearly a decade, I gave up drinking entirely. And the results were pretty freaky. To begin with, my friends did not take to this kindly, and I realized that my friendship with them was based on little more than alcohol consumption. They would show up at my house late at night (while I was at work) and sit on my car and drink beer, leaving row upon row of empties across the hood. It was touching, sort of, but illustrated how friends can be a bad influence on your behavior.

My parent's reaction was no less startling. It was if I had renounced their religion or something. And they would constantly test me. "Are you sure you don't want a drink?" my Dad would say, "Just one tiny one?" Saying that to someone who has decided to stop drinking is like offering a steak to a Vegan. It's just wrong, period.

But giving up alcohol did allow me to focus my own energies better and move forward with my life - completing my Engineering and Law degrees and building up my career.

But the social pressures to drink do not abate. If you don't drink, you are viewed as crippled by many - either some sort of mental moron who is too stupid to be able to drink, or as some stumble-bum drunk who is ready to "fall off the wagon" any moment now.

In Japan, the pressure to drink was intense - as a part of business meetings. "We will drink and bond" one executive told me, and it was hard to say "no" to such overtures. Eventually, I went back to having the occasional beer, and as my life was pretty settled by that point (and I no longer had to deal with my parents), it did not seem like such a big deal.

But, as they say, God has other plans. Gout and diverticulitis both are affected by alcohol consumption - and not in a good way. Gout is usually caused by weak liver function, so drinking alcohol only makes it harder on your liver to process all the other junk your body has to deal with. After a night of partying, I can literally feel the results in terms of aches and pains in my joints and legs.

And many folks don't understand such pain, thinking they have "fibromayalgia" or some other made-up disease, when the reality is, it is just drinking that is causing them pain.

Cutting off empty calories like fast food, and HFCS soda-pop has cut my dietary intake considerably. But a large chunk of my caloric intake still remains empty calories in the form of alcohol. Alcohol, some say, can cause you to get fat, as the body immediately switches over to processing the alcohol (and eliminating it from your bloodstream) and thus lets other calories from your food process to sugar, and then fat. You stop "burning" fuel and start "burning" the alcohol. Regardless of the theory involved, it is the ultimate empty calories - something that you do not need to survive and thus just an addition to your daily caloric intake that does little for your own personal bottom line.

So, one goal moving forward will be to see if I can limit alcohol consumption. And I think there are two ways to approach this. First, not to make drinking a part of every day's activities - to take a day off from alcohol consumption. Second, to keep track of how much you drink, just as you keep track of calories. A glass of wine with dinner is fine. A half-bottle (or worse, a bottle) is not healthy and just leaves you feeling woozy later on. It is OK to re-cork a bottle and save the balance for the next day.

If we can limit alcohol consumption to about 100 calories a day, it would make a big dent in the overall caloric intake. The problem is, of course, we have company coming, and they do like to drink a wee bit...
Newer Post Older Post Home