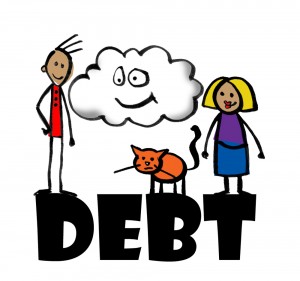 Is debt an inherently a good or bad thing?  It depends.

lately in the popular press, people have been coming out against debt.  And in this blog, I have noted many times that personal debt can be a bad thing, particularly consumer debt.  But not all debt is bad, and there are instances where debt can be constructive and necessary for the functioning of a society.

Bad debts - and by this I don't mean unpaid ones, but rather bad reasons for going into debt, include most consumer debt for what are really unnecessary expenses:

Any type of debt that does not generate wealth for you is basically bad debt.  And by extension, this means that just about all consumer debt is bad debt to take on.  Why is this?  Because it does nothing for you, other than spend your money increase your monthly cash-flow requirements, and place you in a precarious situation if you should ever lose your job or have your income stream interrupted.

But wait, you say, what about the home mortgage?  Yes, the home mortgage - which has caused so much heartbreak in the last decade, can be very, very bad debt - if you are using it to buy more home than you need or can afford.

If you can buy a home for a less effective monthly cost than you are presently paying in rent, then yes, a mortgage can be "good debt".  But beware, as I have noted in the past, if you don't plan on staying in the same place for at least five years, chances are, you will lose money on the deal, if you have to sell, as the transaction costs will exceed the savings by owning a home.

The danger of the home mortgage is that people think that since it is a good deal, then more mortgage is even a better deal.  So they buy more home than they can afford, and suddenly, they are spending more to own than they would pay to rent, on the premise that they are "making money" which of course, they are not.

But what about car loans?  Consumer loans?  Doesn't everyone get those?  Actually, not.  And the danger of the consumer loan is that by offering "low monthly terms" to consumers, people end up over-consuming.  Spending an extra $5000 on a car doesn't seem so bad, when it is pitched as being only an additional $25 a month.  If you have to pay cash, you'd be surprised how those decisions are affected.

So what is good debt?  Good debt is something that is used as a vehicle to make money.   It is a means of spreading risk and also spreading out payments for a project that, if done piecemeal, would cost more.

So for example, buying or leasing a car is probably a bad deal for a consumer.   But if you are a taxi driver and want to buy a taxi cab - and the monthly car payments would be more than offset by the income it would produce, then yes, a car loan is a good debt.  But of course, if you could afford to buy a car outright, paying cash, you would come out further ahead.  But many taxi drivers don't have that kind of cash, and owning your own cab might be more profitable, even after making loan payments, than working for another cab company.

Similarly, borrowing money for Corporate bonds and the like can be good debt, if the money is used to invest in the company and create wealth for the company - as opposed to borrowing to prop up a failing enterprise or just to pay off older debts.

So that leads us to government debt.   Is government debt bad?  The GOP certainly wants you to think so - after helping run up a huge chunk of our current debt (Obama is tagged as increasing our national debt, however, stimulus spending in a time of recession has been shown, time and time again, to shorten recessions.  Cutting spending at this time in our economy will lengthen the recession into the next election cycle, which of course, is convenient for the GOP).

It was only a few short years ago that we had a balanced budget and actually a surplus under the Clinton Administration.  There was talk back then that the government would be so cash-rich as to be an enormous influence in markets.  Funny how things change so quickly.

But of course, Bill Clinton was not a magician who waved his debt wand and balanced the budget.  Rather, during a period of economic prosperity, tax revenues shot up, which made possible budget surpluses and also decreased the national debt - as a percentage of GDP.

So, is government debt good or bad?  If it is used to buy something substantial, that makes money or allows the economy to grow, I would say it is good debt.   A small town floats bonds to build a sewage treatment plant.  The plant could not be financed with tax dollars alone, and once built, the increased capacity allows more people to move to the town, increasing the tax base.  Over time, it pays for itself, including interest.

Or the government borrows money to build a bridge.  The bridge allows people to travel, ship goods, and engage in commerce.   While the bridge alone might not make money (unless tolls are charged) it does provide a benefit to everyone - a benefit that far outweighs its cost and the interest on the loan.

And this is where the GOP arguments fall flat.  During the Bush era, money was borrowed - like we were drunken sailors - on basic operating expenses of our government.  We incurred more debt not to build things or do things, but instead to satisfy a mantra of "no new taxes".  We did not even raise taxes or sell bonds to pay for a very, very expensive war.  And that was a missed opportunity, too, as people wanted to so something patriotic to help in the war effort.  As one commentator noted during WWII, paying taxes was a patriotic responsibility and a privilege - when so many others are dying or being wounded.

But as Americans, we were not even exhorted to buy war bonds during the Iraq war or the war in Afghanistan.  Instead, we were told to consume more and more.

In contrast, the stimulus money spend under the Obama administration has gone to build roadways, bridges, and other infrastructure - which are things that may last a generation or more and increase our productivity.

So, all debt is not bad, and not all government debt is bad, either.  As our economy improves, tax revenues will increase, decreasing our budget deficit and making our debt - as a percentage of GDP - less.  But the idea that the government should be debt-free is probably a fantasy and also dangerous thinking - as it is used be demagogues to advance personal interests.

History will reflect that the recession of the 2010's was exasperated by the ill-advised attempts to reduce debt and to cut spending, at a time when the economy needs more spending, not less.  As we cut back on government spending, it will have a ripple effect throughout the economy.  As government workers and contractors are laid off, they will spend less and consumption will go down.  And as we draw down our military operations, it will compound the effect.  In short, it will cause the recession to extend, not contract.

The GOP's position on debt is not a bad one - if it was made in 2000 instead of 2010.  While the GOP talks a good game about cutting the budget and cutting debt, when they had the opportunity to do so in a real and substantial manner, they chose to do the opposite - cutting taxes, increasing deficits and increasing debt.  Now, a decade later, this debt is "Obama's fault" and we are being told that while debt was good in 2000, it is bad in 2010.  And most people, reeling from the effects of personal indebtedness, are quick to believe this sort of talk.   After all, their personal debt problems are the same as the governments, right?