Is "Wealth" a dirty word? 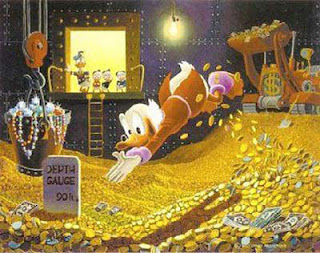 This is how most Americans view "Wealth" and they assume that it is inherently evil.  Unfortunately, this attitude prevents them from building up any wealth of their own.


Much has been made of Mitt Romney's wealth in this election.  I have no beef with someone being wildly wealthy, depending, of course, on how they made it.  An invention broker, for example, who makes millions of dollars by deceiving small inventors and wanna-be inventors, is not to be lauded for his "success in the capitalist system" as some Republicans would have you think.  Such folks are basically crooks, albeit barely within the confines of the law.  And similarly, one has to ask pointed questions as to how Mr. Romney came into his money, particularly given the concerns about the antics of Bain Capital, a company he owns 100% of the stock of, but claims no memory of how it was ran.  And then there are the tax returns and off-shore accounts.

And of course, more than that, I think it is hard for someone making $22 Million a YEAR to claim to be able to connect with Joe Paycheck and Johnny Lunchbucket, who might hope to save half of one of those millions over a lifetime of backbreaking hard work.   No, I don't think Mr. Romney connects with the little man, and the little man is deceived if he believes that.  Deceived by paid political ads on television, of course.  Yet another good reason to not watch television - or a good reason to spend political silly-season in Canada.  Boy, those provincial elections are controversial!  And the attack ads!  Oh, wait....

But many on the Left, and many poor people, perceive wealth itself as an evil thing, and will quote (or misquote) Bible verse to make their point.  In their mind, the desire for wealth is bad, and therefor anyone who tries to get ahead in the world is inherently evil or "greedy" whatever that means.  And not surprisingly, people who have this sort of view are inevitably poor.

To some extent, it may be an example of bootstrapping poor financial decisions.  When you are poor, it is comforting, to some extent, to think of yourself as morally superior to those rich folks.  At least you are poor and honest!  But that is a booby-prize if there ever was one.  And the evidence of this is that those same said poor people who decry wealth are the same ones buying lottery tickets and/or praying for wealth to come to them.  Neither technique works very well, of course.

Our generation - the 401(k) generation - cannot afford to have such childish views about money and wealth.  We will have to fund our own retirement, which means taking an entrepreneurial view of money and thinking of it in terms of wealth, not something to be spent on a new iPhone or a leased car.  We are not being coddled like the generation before us, who suckled at the teat of corporate largess, and relied on defined-benefit pensions to make the payments on our retirement Grand Marquis.

And of course, that generation, thanks to companies like Bain Capital, are finding out that those defined-benefit pension promises can be negated in a bankruptcy court, after management has run the company into the ground - sometimes on purpose.  I have a friend with a pension from J.C. Penny who is doing the nail-biting thing right now, wondering whether the company will survive them, or whether their retirement income may be slashed by 40%.  And by the way, 40% is a lot.

So, it is high time we stopped thinking of "Wealth" as something that is bad or evil or worse yet - something that only other people have.  As I have illustrated here again and again, if you want to have an even average income in retirement, you will need to put aside about a million dollars.  Using the 4% rule, that would yield about $40,000 a year (which is not a lot) and when combined with Social Security (which Mitt Romney promises to put a "needs test" on) might bring you up to about the median household income of $51,000 a year in America.

And if that number scares you - particularly when you might barely have $100,000 in your 401(k), well, it should.  Retirement, even for those of us who saved will be a scary thing, as even saving a million dollars will not assure you a cushy retirement of golfing, living in Florida, and traveling the world.

And that, in short is why I started this blog.   I realized I was burning through money, not saving it, and moreover, spending a lot on "things" which were preventing me from having experiences.   We bought a house on a lake connected to the Erie Canal, with the idea of exploring the canal by boat.  Six years later, we never took that canal trip - the cost and labor of owning the home prevented us from having the time or the money.  Now, we can afford to go.

And by cutting expenses, I am "practicing for retirement" by learning to live on less - far less - than I did in the past.  I could comfortably live, today, on that $51,000 annual income.  But in the past, I would have needed twice that amount just to pay all the bills.   I chose bling and things over building up wealth - personal wealth.

Few of us will ever be as wealthy as Mormons, but we can at least try to improve our personal situation the best we can.  And one way is to stop thinking of wealth as evil, but as something that is value-neutral, and moreover necessary in order to survive on this planet.   You have to build up an estate - you have no choice.  Well, the other choice is to live in poverty and be dependent on others - including an unsteady government - for promises of income.