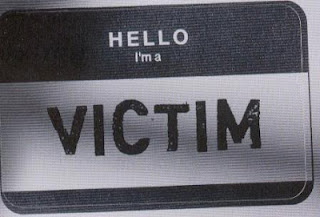 Being a victim is usually not a choice.  The victim mindset is, however.

I wrote previously about Romney’s 47% comment, and how he got it all wrong, but not necessarily in the way Democrats want to portray it.  Many of these 47% are ardent Republicans, even if they are suckling at the government teat.  Romney was wrong, but not for the reasons Democrats portray.

But he was right that if we end up in a society where everyone petitions the government for aid, we will be in a whole host of trouble.  And this idea was driven home to me shortly after I wrote the last piece, by a phone call from a friend in Northern Virginia.

We used to have a cleaning lady.  Heck, we used to have a lot of things.  Hiring a cleaning lady is a sure sign of laziness or that you own too much home.  But I don’t want to digress yet again on another topic.  But let’s just say there are a lot of people who watch four hours of television a DAY, while paying $50 to $100 a week to have someone come in an clean for four hours - once a week.  It is a foolish waste of money for the middle class.

I was never comfortable having “servants” as I do not like the idea of exploiting or even employing others.  This is why I no longer employ people.  It is a hard thing to do, and there is a reason why managers get paid a lot to do it, particularly if they are effective.

We paid our cleaning lady and issued a 1099 form for her, and did it all above-board (others were not so keen about this).  Since she also cleaned my office building, I put her on our group health plan and also made her eligible for our 401(k) plan.  Again, others are not so generous.   When she needed an apartment, after a dispute with her slumlord landlord, we bought a condo for her to live in, charging her a modest rent.

Before you think I am a total patsy, that condo, which cost $38,000, is now worth $150,000 and was paid-off a long time ago.  She continues to live there, paying the condo fee and taxes, which is OK with us.  Although increasingly, I am thinking that we are losing some potential rental income on the place, and the overall amount is pretty staggering.

She is getting older and she said, at one time, that she would return to Mexico when she became infirm, and live with her children. She owns a house in Mexico, which she just deeded to her kids. Not in some slum, either, but in tony Cuernavaca, in a nice neighborhood.

Anyway, I get a call from one of her employers – one of the few who declares her income.  She is here legally, of course, on a green card, and she now qualifies for Social Security and Medicare.  The 401(k), which ended up totaling about $7000, is long gone.  Once she realized she could cash it in, she did, no doubt to send money back to her family, as well as pay off her staggering VISA bill.  She is not good with money.

Her employer arranged to get her Social Security and Medicare, and is now trying to get her SSI – Supplemental Income, which is a form of welfare for the elderly.  I have mixed feelings about this.  If you are one of the legions of immigrant-haters, you might be thinking that it is time for this lady to go back to Mexico, rather than continue to live here on the government dole.  But of course, Social Security is an entitlement, and since she paid into the system (thanks mostly to my declaring her income - still sure that having immigrants work under the table is a bad thing?) she gets paid back – even if she moves back to Mexico.

Dependency and learned helplessness is ingrained early on.  So it is no surprise that she acts this way, as it works out for her, pretty well, and she ends up better off, at least in her mind, than by taking care of herself.

A friend of mine, who is a Cuban-American (or just plain American, if you don’t go in for hyphenation) is bi-lingual and works with the church to help many immigrants with various legal and other problems.   He helps them to close on the trailers they buy, for example, in some of the poorer parts of our town.  They pay cash for these trailers, often trying to show up with wads of $20 bills at closing – many of which are forgeries that check-cashing stores hand out.   He takes them to the big, scary bank, to get a cashier’s check for the closing.  It is a simple thing, but they claim they cannot do it, and they play the passive victim and hope the church or someone helps them out.

Myself, I was never comfortable throwing my fates to the higher authorities and hoping they would have pity on me.  Why?  Because people are not trustworthy, and they are inconsistent and arbitrary.  In many cases, if you do not appear victim enough, you don’t get the swag others get.  And even in systems that are supposed to be quantified and non-arbitrary, this is often true.

And in arbitrary systems, like families, it is even worse.   My brothers were always subject of concern to my parents.  One was sent to a psychologist, as he was tagged as being “troubled” early on.  The other was pushed to go to law school, with the admonition, “We’ll pay your way, if you want to go!”   When I asked, “What about me?” they replied, “You’re OK, you can take care of yourself!”

And so I muddled on, without child psychologists, and finding a way to work my way through law school.   Perhaps the expectation that “you can take care of yourself” became a self-fulfilling prophesy.   When you are told you can do something, you often can.
It was like my time with General Motors.  A wet-behind-the-ears pothead of 18, I was thrust into a busy and dangerous factory, handed a clipboard, and told to manage a crew of 10 men.    No one asked me if I could do it.  They told me to, and that was that.  Expectations are everything.

And perhaps that is what Romney was trying to get at.   When we tell people they are victims and that their only recourse is government assistance, well, they tend to seek assistance from the government.

And the victim mentality – and the desire to “help” others who may not be in need – is rampant.   You all remember that lady who was a bus monitor who cried on a YouTube video, after some kids teased her.  We all felt sorry for her – heck, I did.  After all, we have all been teased at one time or another, maybe on the school bus, and know how humiliating and painful that can be, even if you are an adult.

So people opened their pocketbooks and sent her money.  $800,000 later, she retired as a bus monitor.  I am not saying she wasn’t a victim (although some would argue that her job was not to cry, but to knock heads together) but $800,000 for crying on a bus?  That is a bit out of line.  I wish her well, and hope she rubs those kids' nose in her eight-hundred grand.  But I don’t think it is quite in proportion.

She was successful (and not by her design, but by virtue of a YouTube video) of being portrayed as a victim.  If it were me in that situation, people would laugh and say, “a bunch of kids?  You’re a big guy!  Knock their heads together!”  But of course, if I did, I would be accused of “child abuse” as back-slapping a kid is now considered to be on a par with leaving them chained up in the basement.  So either way, I would lose, which is why I would never be a bus monitor, teacher, or any other job like that – the kids have you by the short hairs, as they are the victims in our society.

I suspect in a Mormon household, kids taste the back of Mitt’s hand on occasion, which is why they are so well-behaved.  But that is mere speculation on my part.

But this rambling diatribe illustrates why it is so hard to put this issue into 100 words or less – and why Romney bungled it so badly.  The victim mentality is a dangerous trend.  It would not be so bad if real victims (and by that, I mean real victims, not 10-year-anniversary Katrina “victims”) were helped by our society.   But that is often not the case – people who don’t deserve or need help end up living off the labor of others, while others in need end up with nothing, as they don’t appear to be victims.

A recent ad on public radio in Western Virginia was for a reading of a play at a local venue.  It was interesting, as they played an excerpt from this play.  The play was a re-write of the classic fable of the Ant and the Grasshopper.  You remember the story – the Ant works all year long to put away food, while the Grasshopper goofs off and does nothing.  Come winter, the Grasshopper demands his “fair share” of Ant’s food, even as he did nothing to contribute to it.

In a perverse twist on this tale, we are lead to believe that the Grasshopper “contributed” to Ant’s wealth by making things more jolly and cheerful with his antics.  Grasshopper, we are told, is an artist and should be compensated for his efforts – and the amount to be compensated is not to be determined by Ant, but by some governmental art agency.

A scary thought.  But of course, Public Radio does not have a liberal bias, and I know this, because a soul-searching piece on NPR examined the issue in-depth and came to the conclusion that Public Radio is neutral in content.  Makes sense to me.

Ahh… but Public Radio!  The only place where you can be a “victim” of a hurricane a decade after it has flooded you out.  If it were up to the Left, Katrina “victims” and their descendents, would be eligible for victim assistance into perpetuity.  Perhaps we should give them land and let them open casinos and sell tax-free gasoline and cigarettes?
Newer Post Older Post Home
View mobile version