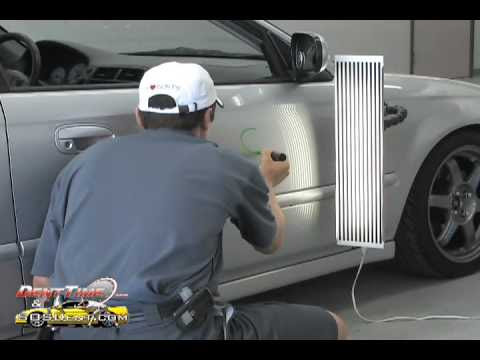 Small dents can be taken out of a car without the need for painting.   It is a pretty lucrative business, yet few choose to get into it.

We live in a port city, where automobile carriers come into port every day, loaded with foreign cars - and leave loaded with American-made cars.   For a year, anyway, we were the largest port (in terms of number of cars imported) on the East Coast.

The marshaling yards are enormous, and it is amazing to see the rows and rows of cars parked outside one day - and see them gone the next.  It is a pretty healthy business.

During transport, cars can get damaged.  Door dings and small dents and scratches are not uncommon, and sometimes cars even fall off the truck transporter - or the truck driver lowers one car (hydraulically) right into the roof of another.   With so many cars being moved around, well, shit happens.

A local fellow I met runs a business out of his pickup truck - for the last 30 years - taking small dents out of cars.   For $300, he spent the morning at my house taking at least 20 small door dents out of the roadster, as well as two larger dents out of the hood.   For the most part, you can't even tell the dents were there anymore, his work is that good.  Since I am selling the car, I wanted it to look its best, so it fetches the best possible price.

And he is a busy guy who loves his work.   I didn't want to interrupt him, but he said he liked to talk with people while he worked, so I spend a few hours listening to his life story while he "tink, tink, tink" made dents magically disappear in front of my eyes.

He said it was steady work - he has a contract with the importers at the port to remove small dents, and every day he goes there and has more work than he knows what to do with.   In an era where people claim "there are no jobs" he has his plate overflowing.

And yet, he said, no one was stepping up to the plate to compete with him, or even work for him.   He has a partner in the business, and has tried to hire people in the past, with little success.   Granted, it takes a modicum of talent to do this kind of work - and keen eyesight.   Bodymen can spot a dent or ripple that you and I would never see, from 20 feet away.

And it takes training.  They actually have a "dent school" you can go to, to learn the trade.   And as he put it, at his first assignment, he spent an entire eight hours taking out a dent that today, he would have done in ten minutes.   Learning a skill takes time.

And you can make mistakes, too.   He recounted one early job, where he was instructed to drill a hole in the end of the door (some paintless dent repair techs will drill a hole in the end of the door, rather than try to work through the window crack or remove the interior door panel - and then cover the hole with a plastic plug when done - it is sort of cheating and the better techs don't do it).   Anyway, he drilled right through the door jam - and the drill came through the outside door panel, ruining the door.  The learning curve is very steep!

But it struck me that here was a guy making a good living, simply by providing a service people needed.   And since he was self-employed, he could call his own shots and work when and where he wanted to.   If someone was a jerk, he could just pack up his tools and leave - because few others have his skills.  It is a pretty good place to be in.

In my field, the same is true.  There are few Patent Attorneys out there and with the decline in the law business, even fewer are joining the field, which according to one JPTOS article, means that there is a shortage in the field.   So, over the years, I have never felt beholden to anyone.  If someone says, "jump" I don't have say, "how high" but "go fuck yourself with your jumping."

And that is a nice place to be.   And yes, it does require years of experience and an expensive education to get to a place like this.   Or, you could go to "dent school" for a lot less money and make about as much as I do - if not more.  At $600 a day, this guy could clear $150,000 a year, if he decided to keep busy.

I am not saying you should go to dent school.   It takes talent, a feel for how metal works, and good eyesight.  And you'd have to find someone to mentor you and teach you the business as well.   But it strikes me as odd in an era of "high unemployment" (supposedly) that even simple "blue collar" jobs go unfilled, because no one wants to learn the trade.

The fellow I talked to has tried to hire people and train them.  Some of them just didn't have the touch.  Others couldn't be bothered to spend the time to learn.   They were impatient for "money now" and wanted to cut to the chase of making big bucks, but not spending the time to do a quality job.

And even if you did want to get into this field, well, be cautious, as there appears to be a lot of people selling training programs and tools, and I don't think it is a skill you can learn online or by watching a video.

But it illustrates that you can make a good living by learning a skill - and not necessarily skills you would learn in college (indeed, few colleges actually teach skills, but instead teach information or ways of thinking).

And it makes me less sympathetic for those who claim there are no jobs out there - when jobs are going unfilled.
Newer Post Older Post Home
View mobile version