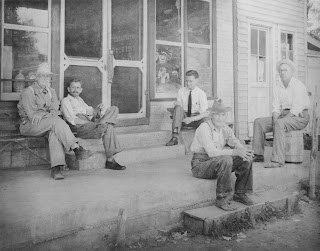 For as long as men have been alive, they've loved to sit around and shoot the shit and tell stories.  Most of these stories aren't true, of course.

I updated my last posting about buying land with a footnote:

NOTE ALSO:   The plebes love a good rags-to-riches story about some yahoo who had some piece of worthless land that he was sitting on and then Wal-Mart offers him a gazillion billion trillion dollars for it to build a distribution center.  Ol' Jimmy was smart to hang on to that land, and ol' Bob doesn't know shit, does he?

Well, the deal is this:  These are the sort of poverty stories that poor people like to tell each other, and rarely are they true.  These are usually "Friend of a Friend" (FoF) stories, and ol' Jimmy is my second cousin's sister mother's husband twice removed.   In other words, he doesn't exist.

Also, Wal-Mart didn't get rich by overpaying for land.  They intentionally locate their stores in places where the land is cheap, outside of town, and use nominal buyers to purchase these properties so as to not arouse suspicion.   They aren't about to dump money in ol' Jimmy's lap when Fred across the street will sell for less.  In fact, they often pit one seller or two against the other to get the lowest prices and tax concessions.

Yes, there are people who sell vacant land at a profit.  Usually these are people who have inside knowledge that the land will be worth more in short order.  They buy a property from some unsuspecting yahoo (ol' Jimmy, in reality) and then quickly flip it for a huge profit.

For example, the fellow who helped found the Jekyll  Island Club bought the island at a fire-sale price from the heirs of the original owners, and then immediately doubled or tripled his money by selling it to the nascent Jekyll Island Club.   He knew in advance the land would be worth more.

And like with stocks, it is damn hard (and in that case, illegal) to get such insider information.   Stop believing in poverty stories!   They will drive you broke!   You don't need to be "lucky" or clever or know someone to get wealthy - you need to be persistent and work hard.

What are poverty stories?  These are the kind of urban legends and rural folklore that the poor pass about, about the mysteries of getting rich.   Usually these are stories about some old working Joe like you and me, who strikes it rich through clever manipulation or some unexpected windfall.   These stories serve a number of purposes to the tellers and their audience.

First, they perpetuate the myth that wealth is like a lighting strike - it could happen anytime to you, and it is the primary way people become wealthy - by "getting lucky".   So working hard and saving are for chumps, of course, which boostraps the behavior of the teller and audience who can then rationalize the fact they blow all their money on monster trucks, bling rims, jet skis, booze, and drugs.

Second, they allow people an excuse not to succeed.   Just as externalizing allows you to give up on putting money in your 401(k) and spend it all on a leased Acura (by arguing that some external force is ruining your life, so why not just give up and live large, right?) these sort of stories reinforce the notion that trying to improve your lot in life is futile, so give up.  Wealth is a matter of luck, right?  So why bother saving, just spend it all now, perhaps on a round of beers for your buddies, right?

Third, they can often be used to sell really poor normative cues, such as buying gold instead of investing your money.  Or leasing a car to "improve your cash flow".  Or whatever other bad financial advice which is so common in this country.   Again, they do this to reinforce their own beliefs - no one who just leased a car wants to be told they just made an idiotic mistake!  (A reader writes that he likes my blog and wants to show the articles to his spendthrift friends.   I would suggest instead keeping your own counsel, as your friends will just shout down any idea that is threatening to them).

There is a fourth reason, too.  It allows the teller of the story to be in the know for once in his life, instead of the clueless idiot who bumbles his way through the day.   We all want to have secret inside knowledge - gnosis - and share it with others.  It is a human thing.

In retrospect, it is probably a good idea to leave these "bull" sessions alone.   They don't accomplish much except to allow someone else's depression take root in your own head.   It is nice to socialize, but maybe a better idea, after a short while to move on down the road and actually get some work done.

Here are some other examples of "poverty stories" that you will hear bandied about by the poor.   I know of these sort of stories, as I heard them when I was living in poverty.  The one above about Jimmy striking it rich by purchasing vacant land is typical - and hits all three points.  Luck is how you become successful, so why bother, and by the way, why not buy that vacant lot?  You see how it works.

The Great Inventor:  Joe blow comes up with an invention and "licenses it to industry and makes a million dollars!"   Again, if you've been reading my blog, you know this isn't true, or rarely is true.   And it is a myth the invention brokers love, as they use it to sucker the Jethros of the world out of what little money they have.   Inventing things is hard work, and you make money selling product, not ideas.  Ideas are dime a dozen - working products are a lot harder to make.

The Company Genius:   This is related to the story above.   Sammy sits in an office all day long staring off into space.   When one of the new hires asks (resentfully) why Sammy gets to sit and "goof off" all day long, a wizened old-timer clues him in:  "Sammy used to stare off into space like that, and he once came up with an idea that saved the company a million dollars!  So they gave him an office and told him to come up with other great ideas as well!"

Nice fiction.  It appeals to the plebes as they think sitting in a chair all day long is some sort of treat.  It ain't - it makes you fat and sick, over time.   But not only that, it just ain't true.  People come up with great ideas all the time and are never rewarded for their efforts.

Consider the guy who invented modern hydraulic fracking.  Love it or hate it, it changed the geo-political landscape, made the USA the Saudi Arabia of natural gas, opened up tons of new businesses (many foreign owned) that came to America to build plants using this cheap energy.  Not only did they not give him a corner office to sit in, they fired him.   Not even a set of steak knives!

The other problem with this story is that in most companies, inventing is a collaborative effort, not a solo one, and you don't invent things by sitting and staring off into space, but by actually doing things by trial and error.   It sort of goes against the entire reality of how invention works.

The 100-mpg carburetor:   I have been hearing this one since high school in the 1970's - after the first gas crises.  It takes a number of forms, too.  In one, a lady buys a car, usually a Buick and drives it around.   She takes it back to the dealer and says, "Gee, it doesn't use much gas, I've only had to fill it up once in the last two months!"  The dealer looks at the odometer and realizes the lady is getting over 100 miles to the gallon.   He tells her to bring it in for service next week.

The next week, executives and "scientists" (in white lab coats, natch!) from the car company are there and take the car away in a sealed van and offer her a brand new car (usually a better model) which she accepts, but of course, it only gets 10-15 miles per gallon, like most cars of the era.   A mechanic tells her later, in secret, that the car company accidentally let out one of their restricted cars (that only car executives get to have!) that gets the "real" gas mileage of 100 mpg or more that cars are supposed to get, but for the secret deal they have with the oil companies!

The other story is about some inventor who came up with a 100 mpg carburetor, but the oil companies "bought up all the Patents" and "suppressed the technology" which is why our portable houses-on-wheels get such shitty mileage.   Not explained in this version is why, since Patents are published someone couldn't just make their own 100 mpg carburetor, and of course, Patents expire after 17 years (back then, today 20 from filing) and the idea is clearly now "public domain" - you can't "suppress technology" if you wanted to.   But you'd better not ask pointed questions like that when bullshitting around the cracker barrel.  You won't make yourself popular.

Again, externalizing is at work here.   We'd all be living in Shangri-La if it weren't for those mean nasty oil companies! (boo! hiss!).    It isn't our fault we drive badly and given the opportunity, choose gas-hog cars instead of reasonably-sized ones.   Buying stock in the oil companies is never seen as an option, either!

You get the idea.  There are hundreds of these stories, and you've probably heard a few.  Let me know of one, if you hear it.  Before conspiracy theories, the Internet and "Fake News" this was the sort of thing we had "back in the day" - it was called Bullshit.   What's the harm in bullshit?   Well, we see today where it had lead us.

Fake News is Bullshit.  And by Fake News, I mean real fake news, not what the "alt right" (a fake organization if there ever was one!) calls real news.   The idea behind these far-fetched stories is the same as the bullshit passed around the cracker barrel or in the break room.   Keep the lower classes down.   Be helpless.  Don't try.  Keep consuming.   Don't bother improving your station in life, as it is impossible to do and the system is stacked against you.   Just keep drowning your sorrows in consumption and maybe some day you will get lucky.

Of course, today, these stories are tied to an ideology on both sides of the aisle. "If only" each party says, "our party is elected an in power and our agenda is enacted, then the world will be paradise!   In the meantime, here's a huge excuse to fail in life!"

So people are rabidly Leftist or rabidly Rightist, convinced that their personal problems will be solved by policy changes or government officials.   A nice fantasy, but like the 100-mpg carburetor, just bullshit, when you get down to it.
Newer Post Older Post Home
View mobile version