To Thine Own Self Be True? 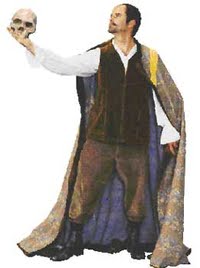 "This above all: to thine own self be true" - what does this mean?

In a previous posting about Lying to Your Doctor, I mentioned in passing:

The point is, Shelia lies to her doctor, often by not telling him the whole story - a lie by omission.  Or if she does tell the story, it is only a half-story, slanted in a particular way.   It is hard to be honest with ourselves, much less honest about ourselves to others, even in the confessional-like atmosphere of a doctor's office.

It struck me re-reading this that I had been misunderstanding perhaps one of the most famous quotes in Shakespeare:

Polonius:
This above all: to thine own self be true,
And it must follow, as the night the day,
Thou canst not then be false to any man.
Farewell, my blessing season this in thee!

The website I scraped this from has an interesting analysis of what Polonius actually means by this quote:

Polonius has in mind something much more Elizabethan than the New Age self-knowledge that the phrase now suggests.  As Polonius sees it, borrowing money, loaning money, carousing with women ofdubious character, and other intemperate pursuits are "false" to the self.  By "false" Polonius seems to mean "disadvantageous" or "detrimental to your image"; by "true" he means "loyal to your own best interests." Take care of yourself first, he counsels, and thatway you'll be in a position to take care of others.  There is wisdom in the old man's warnings, of course; but he repeats orthodoxplatitudes with unwonted self-satisfaction.  Polonius, who is deeply impressed with his wordliness, has perfected the arts of protecting his interests and of projecting seeming virtues, his method of being "true" to others.  Never mind that this includes spying on Hamlet for King Claudius. Never mind, as well, that many of Polonius's haughty, if not trite, kernels of wisdom are now taken as Shakespeare's own wise pronouncements on living a proper life.

That's another take that makes more sense.   I think many others, including myself at one time, took the "new age self-knowledge" aspect of it, as it was bandied about and appears on plaques and t-shirts in recent years.  I used to think this meant being "true" to your beliefs, ideals, and principles.  But the other alternative, of taking care of yourself as part of the unwritten social contract, is something I see today.

But in terms of being "true" to yourself, perhaps the meaning is deeper than Polonius or the website above considers.   It literally means not lying to yourself.   If you tell yourself lies ("I'm not that fat", "It's not that expensive", "I can afford to lease a new SUV") you will end up acting to your own detriment.   Most of the world's problems today are caused not by people lying to each other, but by people lying to themselves.

Or put more succinctly, to lie to someone else, you have to first lie to yourself.

This goes back to externalizing, which I harp on a lot here.   People love to lie to themselves and the first lie they tell themselves is that their situation in life is the fault of other people, preferably unseen or anonymous forces beyond their control.   I'm not fat because I eat too much, it's the high-fructose corn syrup they put in the food!   I'm not broke because I spent all my money - someone took it all away from me!   And so on and so forth down the line.   If your "life plan" requires major overhauls to society, government, human nature, or our economic system, the problem isn't them, it's you.

When we say that our situation in life wasn't based at least in part on our life choices, we are indeed lying to ourselves.  This lie, even a trivial one, is dangerous in that it excuses us from making better life choices down the road.  To thine own self, be true!
Newer Post Older Post Home
View mobile version