A Tale of Two Car Companies... 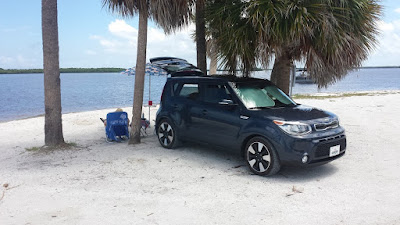 KIA was once owned by Ford.  Ford foolishly sold it off to Hyundai.  Who is making better products and providing better service today?


I recently took both the hamster and the F150 back to their respective dealers for warranty service.  The hamster is now almost four years old (with 20,000 miles on it), and I noticed the clearcoat was peeling off the alloy wheels, which looked kind of ugly.   The service tech was polite and took pictures of the wheels and then called me back to say that KIA was going to replace all four wheels under warranty at no cost to me.   So I took the car in and had them do that, as well as change the oil and add the "wing" spoiler Mark wanted (it was his birthday).   Hey, for what is well over $1000 in free wheels, I didn't feel bad about throwing a little money their way, right?   Anyway, they did a good job and were polite and friendly and the dealership was clean and the service bays were well-lit and not covered with filth.

There was one recall on the car - to check the tightness of a steering bolt.  And the battery was getting weak, so I replaced it (it was cranking slowly after sitting for days at a time) with one from Wal-Mart.  That wasn't covered under warranty, but the dealer checked for me and said if it was, they would have given me a form to fill out for reimbursement.   Nice folks, at KIA.

Then I took the Ford in.

The Ford had a recall for door locks - apparently in colder climates, the doors would lock shut and not unlock which meant you had to climb out a window to get out of the truck.   They did a recall, so I took it in.   I also asked them to replace the rear shocks, which were bad.  On the way home from the dealer, it was like driving a bouncy castle - up and down and up and down, over every tiny bump.   We noticed it during the test drive, and the head salesman said it should be fixed under warranty.  After almost a half-century of driving and after owning over 30 cars, I think I can spot bad shocks.  Did I mention I used to work for General Motors and studied Automotive Engineering at their little school there?  Hey, but what do I know about cars, right?

Anyway, the "service tech" told me that it was "normal" for the truck to bounce like a basketball, and thus they would not replace the shocks.  Not only that, he was kind of insulting about it, implying that I didn't know from Adam about shock absorbents.  He didn't offer to escalate this to the zone manager, or offer any kind of assistance.   The service bays were dimly lit and filthy.  Oil and grease all over the floors - greasy fingerprints on the door of the freshly detailed truck.   I left - and wasn't happy.

I got onto a Ford F150 forum and posted a message about it.  Most of the members said they had similar problems with the shocks and suggested Bilsteins.   Come to think of it, I had put Bilsteins on my 1995 F150, so maybe crappy shocks is a Ford thing.  $189 later, they arrive in a couple of days and take about an hour to install.  The difference is like night and day.  No more bouncy castle handling, which is particularly handy when towing.

Anyway, a few weeks later, a "survey" arrives via e-mail from Ford, asking about my recent service visit.   I am still pissed off at the way they treated me.   Not so much denying a warranty claim, but the rude way in which they did it.   So I let them have it - all zeros.  I also explained what happened and why I felt the shocks were bad.  When you push down on the fender of your car, it should bounce back up and stop.  It shouldn't go back up, then down, then up, and then down, and then up - two or three times.   That is a sign of worn or inadequate shocks.

A week later, this missive arrives from the service manager:

I'm contacting you because of your response to the survey sent to you by Ford Motor Co. We here at Murray Ford of Kingsland strive to make sure everyone is completely satisfied when they leave. If you have not returned the follow up survey from Ford Motor Co., we are willing to make sure that money you spent out of your pocket is reimbursed to you.  Please call me.

(emphasis added - the offer for reimbursement was predicated on my not having returned the follow-up survey - how kind of them!)

Well, I couldn't lie to him (although apparently he doesn't have the same compunction).  I had already responded to the follow-up survey.   But what really stuck in my craw was they felt my integrity could be bought for $189, and moreover that they were willing to "spoof" Ford's survey system by buying me off in exchange for "all fives" on the surveys.  Fuck them.

This is why surveys suck and why they are a poor source of data.

Mr. Chester's kind offer didn't make me feel better about Murray Ford, it made me feel far worse.  His e-mail just confirmed in my mind that these were shady people willing to cheat the system to make themselves look better to Ford - or indeed the world.

A good reputation isn't something you can buy or bribe people to give you.  What they should have done was said, "Gee, Mr. Bell, the shocks aren't worn enough by shop manual standards to warrant replacement, but here's the number of the zone office manager, maybe you can talk to him about it.  We'd sure like to help, but our hands are tied!"

And I probably would have thanked them and gone on my way and bought the Bilsteins and thought nothing more about it.   But instead they were insulting and argumentative, and tried to convince me that down-up-down-up-down-up was the "normal" way a truck is supposed to respond to a bump.

Good service isn't something you should be forced to provide only because you were caught out by the parent company as the result of a customer complaint.  It should be something you do all the time, without checking to see if someone is watching or whether the customer will notice.   It is like a conscience - what makes the difference between a honest man and a dishonest one is what one does when no one is looking.

Mark's brother wants to buy a new SUV and is looking at the Ford Explorer and the new KIA Telluride.  He has a prejudice about American cars - he still believes foreign cars are "junk" even after buying a Honda, which is the best car he has ever owned.  To be sure, the F150 is a technological tour-de-force, with an aluminum body and twin-turbocharged engine.  It actually gets decent mileage (for a truck) and Ford is well-positioned to weather the next gas crises.   All GM can do is put up snarky ads claiming that aluminum truck bodies will tear if you throw cinderblocks into them.  But what asshole throws cinderblocks into his truck?   Ads like that are a sure sign of GM flop-sweat.

But all this technology worries me.  What do I do when it breaks?  In Key West, one of the side cameras stopped working in the heat.  Once we drove North, it started working again, mysteriously (I suspect a bad connection, probably printed flex circuit connector that was glued to the camera module, with the glue softening in the heat).   I can see it now, I take it to the dealer (no matter which one) and they respond with "cannot replicate customer complaint" because the truck, sitting in the air conditioned garage, will work perfectly fine.

Sadly, the attitude of the Ford dealer is typical of American dealers (even American dealers of foreign cars) in general.   I recently watched a YouTube video about sales of American cars in Japan, and one reason they are so unpopular there (in addition to price, quality, nationalism, etc.) is that in Japan, if you go to buy a car, you are treated like royalty - with white gloves (often literally).  You are the respected customer, not some jerk with bad credit who will be "lucky" to be sold a car.

American car dealers take the latter route.  They think they are holding the keys to the kingdom - that cars are a rare commodity and that the customer is "lucky" to be allowed to have one.  And for most Americans, this indeed is the case - they have screwed up their finances so much they cannot afford a car other than on the most odious terms, which American car dealers (of both American and foreign makes) are willing to offer them.

Of course, once consumers assume this submissive posture, they are utterly screwed - and they screw it up for the rest of us.  As one Mercedes salesman explained to me, when I tried to haggle on the price of a used E-class wagon, "I've got people coming in here all the time, willing to pay full price, why should I haggle with you?"  And as if on cue, a Chinese family came in, waving their W-2 forms and their checkbooks, begging to buy the car in question.  Which was a good thing - German cars stopped being a value proposition a long time ago, and exist only as a status proposition today.  I dodged a bullet there.

And that is why buying a car from an individual is so much better, if you can find such a vehicle. Chances are, the individual wants to be rid of the car, and isn't going to play mind games about how lucky you are to buy it from him.  It can be a peer-to-peer relationship, not a master/slave one.  Of course, people who try to sell their own cars often find dealer-buyers who play the same old tired game - telling people how lucky they will be to sell their car to them - for far below book value, of course.

The funny thing is, of course, that cars in Japan are very expensive, and there is little in the way of haggling over price, discounts, sales, or rebates.  And maybe that is the problem right there.  Here in America, we all want a "deal" and are willing to be treated like crap, if we think we are getting a discount.

In the meantime, I peeled off the "Murray Ford" emblem from the tailgate and removed their "Shazam!" license plate frame from the bumper.  I won't be taking it back there for service, that's for sure!
Newer Post Older Post Home