Selling Your Car (or Boat, or RV) on eBay 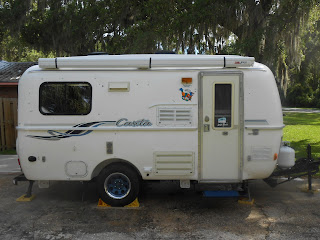 eBay can be a good venue for selling vehicles.


I have not posted in a while, as we are in the middle of selling the Casita on eBay.

A lot of people ask me, "how do you sell a car on eBay?" as if it was some sort of magical process that required a PhD to complete.    I have sold a number of vehicles on eBay, including five BMWs, a 1948 Willys Jeep, three Bayliner boats (21, 27, and 29), three (now four) RVs, a Russian motorcycle, and several other vehicles (SHO, Fiat Spider, Mercedes W123, etc.).  It wasn't really all that hard.

And in most cases, I ended up getting more money for the vehicle than I thought I would and also more than I would have had selling "locally".  Oh, yea, in as little as seven days, the vehicle is SOLD and goes away.   None of this perpetual "for sale" nonsense like you see in Central New York.

It is a great way to dispose of vehicles.  I listed the Nissan on eBay but sold it to someone local.  This was a mistake as I did not get as much for the vehicle as I could have, and since a local now owns it, if something goes wrong with it, no doubt I will hear of it.  So far, though, he seems happy with the truck, and should be, as I sold it for thousands less than what I would have gotten on eBay.

The process isn't hard.  Be honest.  Be detailed.  Put in lots of photos.  Create videos to accompany the listing.   Some folks think they can be "clever" and hide defects and issues with a vehicle when selling it online.  This is stupid.   The buyer will spot these when they pick up the vehicle and either opt not to buy it, or leave negative feedback, or just sue you.   People who are too clever by half always end up in trouble.  Point out all the flaws, scratches, and problems.  This actually gives bidder comfort in bidding, knowing you are telling the whole story.

The auction typically follows a pattern.  Early on, you get lots of eager bidders who think they will get your vehicle for nothing.  They pepper you with questions - some inane - and fantasize about winning the auction.  Of course, they don't want to pay much, so in the early days they are outbid and you never hear from them again.

You also get the folks who want you to provide esoteric information that is hard for you to obtain.  What is the bore diameter of the cylinders?  That sort of thing.  Nonsense information that is hard for you to find.  I suspect these are trolls.  Others will try to run down your vehicle and then say they will stoop to buy it, if you "end the auction early" and sell it to them for a low price.   These sort of people never bid and are likely trying to perpetrate a con.

Then there are others who try to power-shift.   "I'll buy your car if you end the auction early, but I want to inspect it first.  So if you end the auction now, I will come and look at it and decide whether I want to buy it!"  You know how that works out.  If you went along with this cockamamie scheme, they would show up, allege the vehicle is loaded with "defects" (which you disclosed, of course) but as a favor to you, they will give you $500 for it.    Apparently some people fall for this, as curbstoners do this to people all the time.

Then there are the trolls and time-wasters.  People e-mail you with questions that are clearly answered in the listing if they bothered to read it.   I think some of these are overtures from Nigerian scammers.  Others are just lazy people who can't read.   Maybe others are trolls.   One lady asks me, "does the unit have air conditioning?" and another "does it have a bathroom?"   Both are answered by the text of the listing - and shown in the videos - but they can't be bothered to read or watch.

Who ends up buying?   In almost all cases, in the declining seconds of the auction, someone snipes the bid and buys the vehicle - someone you never heard from and who never bid before.   And in those last minutes and seconds, the price of the vehicle can rise by hundreds or even thousands of dollars.   So don't worry too much about answering questions early on in the auction - the folks asking those questions either never bid, or are outbid rather quickly.   I try to answer them, to be transparent.   But when someone asks a question that is clearly answered in the text, I can be somewhat curt.

It isn't hard to sell things on eBay.  And the best part is, they sell.  If you park your car at the end of the driveway, you have to hope that, of the ten people driving by during the day, one of them wants to buy your car.  With eBay, you have a national audience of millions of people.   In seven (or ten) days, the item will sell, unless you are an idiot and put some outrageous "reserve" price on it.

I tend to start the auctions at a dollar and let the market determine the market value.  Believe me, the market will do just that.  I have yet to sell a car for a dollar on eBay.  In fact, I usually end up getting far more than I would selling locally.
Newer Post Older Post Home