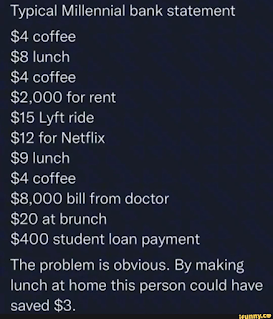 I saw the above "meme" on the Internets the other day and it struck me as a classic example of Learned Helplessness.  You can't win at the game of life, so you might as well give up, order a double-tall latte frapachino at Starbucks and a burrito the size of your head at Chipolte!  Haw-haw!

Seriously, though, this "Meme" was obviously created by someone from overseas (Hello Russia?) who has no idea how things work in America.  To begin with, $8000 is more than the maximum out-of-pocket on an Obamacare plan, so it is hard to understand how anyone could end up with a staggering bill like that on an annual basis, much less a monthly one.  Not only that, this represents a serious illness (cancer, car accident, whatever) that isn't affecting a "typical" Millennial or anyone else for that matter.

The rent thing is also suspect.  I have a condo in the DC area - next to a Metro station, no less, and it rents out for $1300 a month, utilities included.   That's pretty cheap!  Maybe $2000 a month is the "norm" in a trendy district or a tech hotspot like the bay area, but not the rest of the USA.  Where I live, you can rent a place for under $1000 a month - sometimes well under.

But it gets even better than that.  Get a roommate, a lover, a partner, or a spouse, and that rent check cuts itself in half.  So many people I meet today are loners and lonely and wonder why their life sucks.  They claim they can't get laid, and everything costs too much.  But if they would just find someone to live with (and no, you are not "entitled" to marry Stacey or whatever) you can cut your personal overhead in half.

But it doesn't end there.  The punchline of the piece is "you could save $3 by making meals at home!" which is also wrong.  The "Meme" posits that the Millennial spent $49 a month on meals and coffee (no mention in the budget for groceries - but hey, the whole thing is made-up anyway!).  Making meals at home would save about 3/4 of that cost, or about $40.  Coffee at home costs about 22 cents a cup to make.  It's free in the break room at work.  Going out to buy coffee at Starbucks is just stupid.

It may not seem like a lot, but $40 a month, invested at 7% interest over a 45-year working life, amounts to an additional $146,760.85 in your retirement account.  Additional - because I suspect the typical slacker who uses a restaurant as a kitchen isn't spending only $49 on meals but far, far more.

Little costs add up - on your credit card, resulting in intractable credit card debt.  Compound interest is a bitch when you borrow, a friend when you save.  And that has been the whole point of this blog - how small cuts in your budget allow you to save for the future - and you will have a future.  You can't just decide to invest without taking that money from somewhere.

There are other liberties taken in this "Meme" as well - Netflix went from $8.99 a month to $12 for some reason - and there is no reason to have it every month.  Watch a streaming channel, see all there is to see in a month (believe me, Netflix is pretty shallow in content - they all are!) and move on.  You don't have a "right" to cable or a streaming service, that's just bullshit.

The Uber thing is hard to parse.  I guess this person doesn't have a car?  Or did they get hammered at the bar (expense not shown, along with drugs) and need a ride home?  It is just tossed in there because I guess Russians think that is how we live.

So what's the point of this "Meme"?  Several.  First, it is a shot at class warfare - the rich have it so good while the rest of us struggle to pay for our Starbucks while inexplicably failing to sign up for Obamacare - and we all have chronic medical conditions that cost thousands of dollars a month.  Yea, that could happen, I suppose.  I guess it could happen if you were one of those Obamacare deniers (like the anti-vaxxers) who refused to get a free Obamacare plan just to "show the man" they weren't going to accept charity (but at the same time let the hospital absorb their $50,000 emergency room bill from their motorcycle accident!).   In other words, it is just bullshit.

The second thing, is of course, the underlying premise that unless radical social change is enacted a la Ms. AOC, well, you might as well not bother trying.  Just wait for the revolution - saving money is for chumps!  So go ahead, have that Starbucks - it is an act of rebellion!  Besides, you deserve it!

Which takes us back to learned helplessness.  When you think nothing you do in your life changes your environment, it is all-too-easy to cower in the corner, hunker down on your sofa, order delivery food and binge-watch Netflix or play video games for hours on end or just surf the net.  We call that "mental depression" and it is a mental illness.

And when you do this, well, it is no surprise your life doesn't go anywhere, which seems pretty obvious when you think about it.

Life will always deal you a shitty hand - and most people realize this when they get older and get infirm and realize they have not much left to look forward to.   I complained about my diverticulitis until I met a man at a campground here - 15 years younger than me, and still working - who not only had diverticulitis, but had 12" of bowel removed, at which time they found cancer.   Yea, that.   But he isn't bitching about his $8000-a-month "doctor bill" because it doesn't exist - he has Obamacare.

But that doesn't fit the narrative, does it?