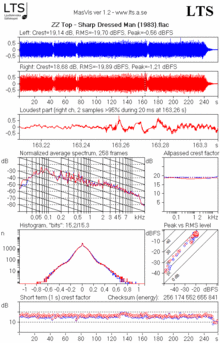 Music from the 1990's sucked, not because of content, but because of how it was produced.

I recently went down a Wikipedia rabbit-hole and ended up on the "Loudness Wars" page.  It was an interesting revelation, as I sensed something was wrong about modern music, but couldn't put my finger on it.

It all started in the 1960's with Phil Spector and the "Wall of Sound".  Spector was later convicted of shooting his girlfriend, but before that, he was the master of mixology and record production. Instead of just recording a band playing, he filled in the sound with all sorts of instrumentation, over-dubs, and reverb, so that the sound seemed "fuller" and sounded better on the car radios of the era.

Karen Carpenter - and her brother, who produced her albums - did sort of the same thing.  The would "overdub" her voice by singing over and over again on the same track, until the resulting recording was a half-dozen or more Karen Carpenter's singing together.  This results in the harmonics being emphasized and the off-notes being cancelled out.  The voice sounds better than it actually is, and also has that echo quality.  It was auto-tune before auto-tune was invented.

Actually, Auto-tune, (first made famous by Cher in "Live After Love") as I understand it, does pretty much the same thing - it "corrects" the frequency of the voice to a predetermined score.  You can be a total monotone singer, and yet create music these days, provided you have a good producer and audio engineer.

And that's the key, right there.  Sir George Martin (knighted no less!) was known by some as "The Fifth Beatle" as his studio engineering created the sound of many Beatles records (and Phil Spector had his hand in it as well).  Studio music can be created artificially using recording equipment, to produce a sound that can never be reproduced live, which is why many bands basically lip-synced their live performances using a cue track to sing along with.  There was no way you could play, live, a song that required 50 takes and was assembled electronically on tape.

But those efforts were primitive in comparison to what can be done today and what could be done on the CD. Using compression and other techniques, studio engineers could increase "loudness" creating a "brick wall" of sound - making Phil Specter's "Wall of Sound" look like a picket fence.  Some claimed this technique made music sound better - particularly to record company execs.  Others thought (as I do) that it is a crutch that musicians use to make crappy music sound better.

Whatever the reason or motivation, many albums from the CD era had this overproduced "Brick Wall" loudness, and as a result, sounded like crap to many folks.  Music was - and is - a product sold to us like a gallon of gasoline or a pound of potatoes.  More like McDonald's food, I think - generic and bland and bad-tasting.

At that point in my life, I drifted away from music. I sold my "killer stereo" that was something I desperately wanted when I was 20 years old, but at age 40, seemed juvenile and pointless.  I listened to less music, and much of what I listened to was older. I thought at the time that perhaps this was just part of my getting older - that older people listen to less music than teenagers and 20-somethings - and perhaps this is true.  But I think something else happened as well - the music changed.  And the "Loudness Wars" were part of this - packaging music as an overproduced product, to be processed and artificially sweetened until it was palatable, even if the core ingredients were dreck.

In a way, it was like television shows - they "sweeten" them with canned laughter, which you often don't notice until it is absent.   They have people applauding wildly and laughing loudly at things that are not entertaining or even funny.  This was parodied astutely in "Heil Honey, I'm Home!" where each character gets a standing ovation just for entering the room.

Television, like music, wasn't something we just happened to watch, but a product engineered for us, much as a "Spicy McChicken Sandwich" is engineered and focus-group tested until it becomes something that bears little resemblance to actual chicken or a sandwich.

There is, of course, hope.  The loudness wars encouraged a backlash, and many musicians have come out against this form of over-engineering of music - that is, until their album flops and they seek out the "sugar" to revive their career or pump up the numbers on a lame release.  Given the loudness levels of much of today's popular music - as well as the warbling and auto-tune - I doubt that over-production is gone for good - it will just morph in new ways.

The real shame is that really talented artists are falling by the wayside, and people with no talent, but an image and reputation are taking their place - their "music" being manufactured in a studio by Engineers, instead of being performed by artists.  All a modern recording artist need do is read the lines of lyrics out loud, and the Engineers can do the rest - making him or her sound like a songbird, albeit an electronic one.  Add a little loudness, some over-dubbing, and a host of backup studio musicians, and well, hell, I could be a "rock star" today.

But then again, that was the point of rock since the 1960's - it was all about selling an image, not music.  Sometimes the music was actually good, too.  But without an album cover showing pouty androgynous late-teens or early-20's males on it, well, the stuff didn't sell.  Rock and Roll didn't die - it never was alive!