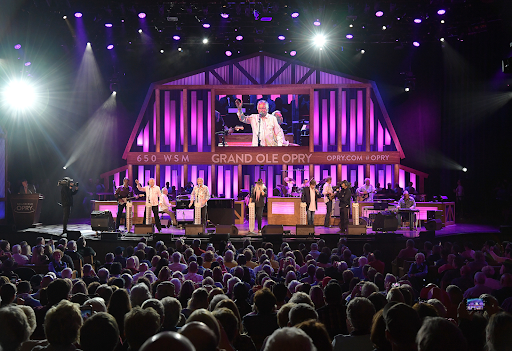 Is it safe to go back to the theater?  Probably not!

We just returned from the Grand Ole Opry, which is a lot of fun, but kind of expensive.  A simple drink can cost $30 or more at the bar (!!!) and tickets aren't cheap, either.  We were there for a "Classic Country" night, and they played a lot of the good, old-time classic country music. They also had a "New Country" performer who was touting his new album and a new Christmas song, "The Soldier's Gift" which I think you will hear a lot of this Christmas season, as it hits all the high points of country music - God, Country, Pickup Trucks, Hound Dogs and Cheatin' Women.  Well, it hit the first two, anyway.

(The "new country" performer, by the way, had that belting baritone voice that had the distinctive sound of auto-tune.  I suspect he was singing also behind a recorded track - not quite lip-syncing, but very close!)

It is kind of odd that the demographic for county music is in the bible belt - folks who claim to be Godly and all that, but the number one topic of most country songs is "Who's cheating who?"   Adultery is apparently quite common with that set, although they are the first to throw stones at the rest of us as "sinners."   Go figure.  (Or perhaps stereotypes about country music audiences are all wrong!)

Anyway, it was a good show, but people were behaving badly - as before the pandemic - and perhaps worse now.  Folks have become used to sitting at home in front of the big screen, talking over the programs, getting up to use the restroom whenever they want, spilling popcorn all over the couch - that sort of thing you can get away with at home.   Well, apparently some think that the theater (movie, play, musical, concert, whatever) is the same deal - you are just sitting at home and those "other people" are just a frame around the big-screen you are watching.  They have no needs or wants of their own - this is all about you!

For the most part, people were well-behaved, but the evil cell phone and zoom-lens camera raised its ugly head a few times. Some drunkards kept taking blurry videos with the camera light on which makes no difference in the picture (you are not illuminating the stage from 30 rows back!) but annoys the snot out of the person sitting directly in front of you, who suddenly finds themselves under a kleig light.  That person was me - there were others as well.

Others, apparently from some sort of convention of some sort, were drunk and talking LOUDLY - and I mean so loud you couldn't hear the music.  What's more, they really didn't care about the show - they got free tickets as part of this corporate outing, and they were bored by it all and made inane comments like, "Gee, I wonder how much corporate paid for this!"   They might as well have left - and some did, thankfully.

But at least it wasn't as bad as the Squirrel Nut Zippers concert - although I wished Bob Dylan was there with his thug-like bouncers to snatch those cell phones and eject their owners.  That guy has a clue!

Sadly, it seems this is a new norm.  I saw a comic the other day and the fellow was commenting that even though people were talking in the theater and being impolite, he was still glad to be back in a movie theater again, after two years of lockdown (he no doubt has bought AMC stock!).   I am not so sure others will follow though.  After two years of seeing things on the big screen at home (and the big screens at home keep getting bigger and bigger!) I wonder if people are going to put up with paying exorbitant prices for tickets, drinks, and popcorn.  Let's face it - going to the movies has become less and less fun, and in many cases, the home experience can be just as good, if not better, if you have a surround sound system, comfortable chairs, a big screen, and no idiot in front of you wearing a top hat.

It may be a bit too soon to yell "olly olly oxen free!" just yet.

I digress a bit, but our last two visits to the Grand Ole Opry were marred slightly by the performers going off on politics.  I don't remember the first time it happened - what the performer was saying - but he went off on a five minute diatribe on politics, which isn't what I came to see.  It is like when the Dixie Chicks started going off on George Bush during a concert - it wasn't what people paid to see, and it gets kind of awkward when people on stage just assume  you agree with them.

I wrote before how a young woman of Vietnamese descent claimed the Banh-Mi sandwiches at the school cafeteria were not "authentic" and thus "cultural appropriation".  The school made apologies for this cultural assault - we're still waiting for Taco Bell to atone for its cultural holocaust.  It was a tempest in a teapot - a complaint made by a 19-year-old girl who was too young to understand that cafeteria food always sucks - or at least is a compromise.

But the real promoters of "cancel culture" have been the right - Fox News, for example, loves it.  They love to amplify these things out of proportion and claim that everything they hold dear is going to be "cancelled".  But of course, if someone tries to teach "critical race theory" (again, something blown all out of proportion - it was just an article on the NYT for chrissakes!) we need to cancel that by passing laws forbidding it!  Never mind that it really isn't a "thing" anywhere outside of a few school districts in the bay area - we need to shut it down!  Irony is often lost on the far-right.  "Cancelling" Robert E. Lee is bad, but outlawing a discussion of slavery is OK!

But the point is, I didn't come to the Grand Ole Opry for a discussion of critical race theory and it was sort of a buzz-kill when the performers use a musical venue as a soap-box for political opinions.  And what's next?  Stop the steal?  I mean, once you go down this path, it starts to get messy.  And again, it doesn't matter if you are right or left, it just isn't appropriate - and its bad business.

You see, Nashville might sound like a conservative bastion, being country music and all, but you'd be shocked at the reality of it - it can be quite the liberal enclave.  Yes, odd as it may seem, musicians and artists can be quite open-minded and liberal.  Yes, I know - shocking!   Just assuming the audience agrees with your opinions is a bit presumptuous.

But the Gatlin brothers can be forgiven, as they are "old school" and came up through the gospel tradition.  It is just sad, though, when you see old men like that blather on about what they saw on Fox news the other night.  Everyone nods their head and chuckles at Grandpa (and not Grandpa Jones, either!) for becoming a doddering old fool.  It's a sad way to go.

But I guess we all do it - perhaps especially me!

That being said, Mark was looking online at tickets to see Steve Martin and Martin Short live in Jacksonville.  Tickets started at $96 and up, and the only seats available were orchestra.   Given the cost of traveling there, the cost of tickets, the cost of drinks and snacks (and dinner beforehand and perhaps a hotel room) it sounded like a $500 night - at least.  And I am not sure that seeing the two "Martins" live would be any better than seeing their shtick on television.

Unless you are in the front row, in many cases, the "live" performance you see is that of someone the size of a Barbie doll, or in the balcony seats, a pinhead.  And tellingly, most venues today have multiple "jumbotrons" (in the Grand Ole Opry, at least six!) so you can see what is going on, onstage.  Even as you are there, live - you are watching it on tee-vee!

So no, I am not rushing back to the movie theater or the concert hall just yet.  There may be a "bump" in theater attendance as people want to go back to the pre-Covid era.  But I suspect that once they do so, they may realize that the pandemic changed things, forever.  And spending hundreds of dollars to see a live show - or even a movie! - isn't a value proposition, particularly if the audience members are behaving badly, or the performers are, as well.