Get Rich or Get Thrifty? 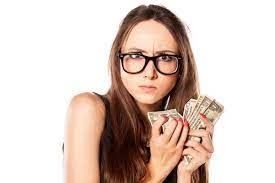 How do you accumulate wealth?  Slowly over time, or all-at-once in the big score?

When I was in my early 30's, I was doing pretty well - or should have been.  We owned our own home, but of course it was mortgaged for more than we paid for it to pay off credit card and other debts.  We owned my office building, which was a good investment (and money-maker) as well as half a duplex which generated $100 a month in positive cash-flow (and a nice depreciation deduction).

But we were still living "paycheck to paycheck" on over $100,000 a year - back in the 1990's when that really was a lot of money.  What the heck was going on? I couldn't figure it out! It couldn't be our lifestyle - after all, we lived the same lifestyle as our neighbors, or so I thought.

I thought about investing - in addition to funding my 401(k) and life insurance and whatnot.  I opened a trading account and bought some stocks - much as the kids today are doing on the Internet.  I thought to myself, "I'm going to make the big score!  All the stocks I pick are going somewhere!"  And that was true, only that somewhere was in the toilet.

We struggled this way for a long time - always one paycheck away from insolvency, even though we owned a lot of "things" and stuff.  It took me a long, long time to figure out that the get-rich-quick mentality was the wrong approach.

It is funny, but I selected the name of this blog on a whim.  It isn't a very good name, but it must have made some small impact.  When I search Google for old blog entries, I might find one or two, but then I find pages upon pages of sound-alike entries, all criticizing my blog, indirectly.  "Is Living Stingy really a way to make money?" a website called "Clever Girl" asks.  There are dozens of others - the image above was scraped from one of them.  The conclusion is, of course, that I am full of horseshit, and the way to get ahead in life is to go to an online casino or perhaps invest in some stock tips!

Donald Trump claims he is being "censored" on the Internet.  The reality is, the folks who run "Social Media" realized that you can't sell much to survivalists other than their black-powder muskets and pallets of survival food.  Not much profit in that.  So they pivoted to stock manipulation, with this "Robinhood" and "Stonk" nonsense - bidding up the price of random stocks through the stratosphere, by getting some 20-somethings (such as I was) all riled up over these stocks, and posting bizarre things with all sorts of technical-sounding jargon and numbers ("the reverse flip-swap index has flimmered to 5% over-asking at the close after-market!  This is big, people!").

I mentioned before that early on in this blog, I got inquiries from young people asking how to "get rich quick!" and were disappointed when I told them things like get rid of cable TV and don't buy an iPhone and never lease a car.  They wanted stonk tips!   You won't find them here.

Sure, there are people in this world who "get rich quick" or at least appear to do so. We all hate Jeff Bezos because he is a lying son-of-a-bitch (if you doubt me, buy something on Amazon - they lie to you several times, just during the checkout process!) but on the other hand, he didn't become one of the wealthiest persons on the planet overnight.  And the reason he got so wealthy is chumps like you and me keep sending him our money.  We buy his crap from his site, and we hype the price of his stock.  If you really want to protest wealth inequality, stop sending rich people your money.  It is as simple as that!

And so on down the line.  Yes, some folks "got lucky" and also were unscrupulous in their business practices.  Bezos is the new union-buster and he crushed the competition online by undercutting prices to build up a critical mass - that's the American way, go big or go home.  And again, we "little people" are complicit in this strategy.  Some new IPO comes out and we all go ga-ga over the stock, even though the company is hemorrhaging cash trying to crush its competitors.  We bid up the stock price (the little people are the ones who drive up prices, not the whales who got blocks of stock as early investors) which in turn bootstraps the whole deal.

But that's the ever-loving point.  These small investors - buying a few hundred dollars of stock at a time - are the ones driving up prices and making the rich people richer.  I saw a pathetic thing online where a guy posted his statement from Computershare, of his massive investment of $150 in GameStop.  It is guys like him who are driving the share price through the roof.  And by posting this on Social Media, well, it bootstraps the whole thing.

What ends up happening, of course, is that the guy who started this nonsense cashes out, and the share price plummets, and the "little guy" loses his hundred-fifty bucks.  Not enough to sue over, although there is a class-action suit against Robinhood over some of these trading irregularities.

This sort of "investing" is worse than gambling.  At least in gambling, you know the odds, and everyone at the gaming table has an equal chance of winning.  Well maybe not entirely equal, but at least close.  Gambling is still stupid, of course.

But get-rich-quick schemes? They always end up in tears.  They get the other guy rich, not you!

So what's the alternative?  Well, it was staring me right in the face, when I was 30-something and living "paycheck to paycheck".  I had a lot of money pass through my hands, but it was like trying to shovel water with a sieve - it just went right through and all over the ground, mostly going to waste in the form of bank interest.

Over the years, I had great opportunities handed to me on a platter - most people do, including the current generation. But I squandered most of these opportunities on silly things and status symbols.  When I bought my first house, I could have paid off the mortgage in a matter of a few years, if I had saved my money, not bought a brand-new car, and instead gotten a roommate.  Instead, I spent money like it was water, and made the minimum payment on the mortgage.

Similarly, I could have invested more in my employer's retirement plan, but chose not to do so.  Worse yet, when I left a company, I generally cashed-out those plans, paying tax penalties and then blew the money on dumb things like motorcycles.  This is not to say I couldn't have had a motorcycle, only that I could have bought one used for a lot less money and had just as much fun, if not moreso.

And so on down the line.  A few dollars here, a dozen dollars there, and it would have made the difference between having money in the bank and "living paycheck to paycheck".  Like a goldfish growing to the size of his bowl, I spent to the size of my paycheck.   The fault was all mine, not the government, not my employer, or those "rich people" or whatever.

Compound interest is a bitch when you are paying it, it is a lovely thing when it works in your favor.  And simple compound interest calculators illustrate how even putting aside $5 a day - the price of a cup of coffee, would, over a 45-year working life, puts $557,996.97 in your 401(k) at 7% rate of return.  Of course, this requires you not spend $5 on something else - I learned that the hard way, and saw many of my friends make the same mistake.  You can't save money without taking something out of your budget first.

When retirement rolls around, well, you get taxed on the money you take out of your 401(k) - so it pays to take out as little as you can every year. If you are debt-free by retirement, well you don't need to take out much, and your tax bill may be negligible (a few hundred dollars for me) as you are in the 15% bracket and the standard deduction cuts most of your taxable income.  It isn't impossible to do.  It isn't even hard to do.  But we choose to do other things because they are easier and more fun.

For example, as I noted above, we refinanced our house and took out cash to pay off credit cards - effectively financing a restaurant meal we pooped out in 1997 over 30 years amortization.  Pretty stupid stuff!  But most folks do it, thinking they are being "smart."  Why drive some old Toyota, when you can get a home equity loan and buy a Mercedes?   Problem is, the Mercedes will be far less reliable that the Toyota, and certainly won't outlast the 30 years of mortgage payments.

It is easy to fall into these traps, as the financial industry tells you that you are being "smart" with your money by taking out a home equity loan.  But of course, the people telling you this are selling you a home equity loan.  Funny how that works, eh?  And that is the topic for my next posting, by the way.

The one sure-fire way to get wealthy - or at least middle-class comfortable - isn't betting on long-shot payoffs in wacky things like gold or bitcoin or "stonks" or whatever.  Even if those things do go up in value, your $150 invested isn't going to turn into millions. And in most cases, the small investor never makes money at these deals anyway.  You can't win playing someone else's game.

Get rich quick?  Not likely, so just give up on that.  Get middle-class slowly.  It beats poverty!