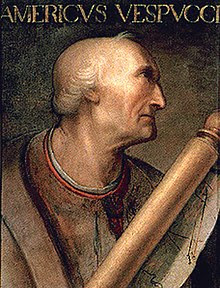 We need an Italian hero!  May I suggest?

Columbus day has come and gone and the usual complaints about Columbus are being aired.  And they are, for the most part, true.  Columbus engaged in enslaving an entire race of people and then wiping them off the face of the earth.  And he either participated in, or condoned, the use of sex slaves as young as nine years old.

A reader of mine tried to convince me that such actions were the fault of his Spanish cohorts and that Columbus was just the navigator - he drove the getaway galleon.  But under the felony murder rule, it makes him just as culpable as the rest.  And besides, letters he wrote which still exist today, document his greed.

Perhaps it was not so much greed as a need to be vindicated. The Spanish throne funded his exploration and all he had to show for it was a couple of lousy islands with little or no treasure on them - other than potential slaves.  So he argued for yet more money to explore further and find more riches - which he did, but those riches primarily being more slaves.   His abuse of the natives was so bad, he was tossed in jail later on - something that was covered in my 3rd grade "history" book, but not the reasons why (we were told he was "in debt" or something).

So, fuck Columbus.  He didn't "discover" much other than present day Haiti and the Dominican Republic.  He missed two entire continents that were only a few hundred miles away. And besides, the Norse got there first - among Westerners.  The place was "discovered" of course, thousands of years before, by Asians crossing over from Siberia - the ancestors of today's Native Americans.

As I noted before, American Indians were no saints, either - often slaughtering one another in tribal warfare. The Aztecs and Incas were apparently quite fond of this - but not very efficient. Spanish explorers brought horses, muskets, cannons, and diseases - and wiped out the natives at a far greater pace.

So... Columbus Day is problematic. But as I noted before, it had become more of an "Italian-American" day celebrating Italian heritage - using a guy who lead a Spanish Expedition as a talisman.  It has a number of structural problems.

But the push-back to "cancelling" Columbus Day is in part from Italian-Americans who don't want to lose "their" holiday, even if its roots have little to do with being Italian.  So why no pick another day and another name and just move on?  Let's face it - "Indigenous Peoples Day" just doesn't have legs.

May I suggest Amerigo Vespucci Day - from all accounts, Amerigo - who was Italian - never enslaved anyone.  But he named the "Americas" with his own name (a nice trick) and thus we can celebrate him - and Italian heritage - without worrying about exploitation of anyone.

There you go.  Problem solved!  Next!