Pressure Washing and the Joys of Home Ownership 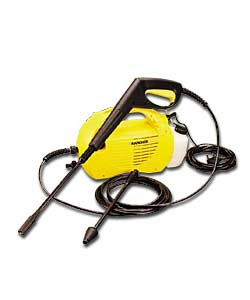 Owning a home is a series of chores.

A reader writes asking whether I am still alive, as I have not been posting regularly.  Rest assured, if I was dead, I would let you know.

No, rather what is happening is we returned home and have to spend countless hours doing back-breaking work getting the house in order - and cleaning the camper and getting it ready for storage.  Perhaps if we never left, it wouldn't seem so bad, but when you come back after four months and try to do everything at once, well, you realize cumulatively, how much work a house really is.

Pressure washing, for example.  The eaves and soffit of the house - the trim pieces around the roof - all get covered with dirt.  Some runs off the roof and sticks to the facia board.  Spiders build webs and nests and poop out dead bugs all over the place.  Dead leaves and pine needles collect (far less than in the past, after we've had about six trees removed) on the roof and sidewalks.  Shrubs grow over the windows and roof of the house.  It is a lot of work to put everything back in order.

Some folks never do, of course.  If you live in a house all year long, maybe you don't notice the shrubs growing over the eaves - the classic "haunted house" look.   The windows are covered by shrubbery so it gets dark inside and the people inside the house get depressed and go crazy.  The house actually becomes haunted, in a manner of speaking.

You have to keep up with this stuff, otherwise it overwhelms you.  And as you get older, it gets harder to keep up.  Our house has vinyl and aluminum trim, so it is fairly easy to scrub it with a brush-on-a-stick and some Simple Green and use the low-pressure Karcher to blast off the dirt and spiders.   Other houses have painted trim, which makes using the pressure washer a little trickier, if not impossible (even the low-power Karcher will blast the paint off).  Of course, one alternative is to use brown trim paint, so you don't see the dirt.  It's still there, though, and eventually you will see it, particularly the spider webs.

Now, back in the day (and even today) rich people had big houses and an army of servants and hired help to keep everything spic and span.  And many of those rich folks lost their fortunes and the "Great Homes" of the UK and US fell into disrepair.  It was just too much to keep up with.

For us middle-class "strivers" the problem is even more acute.  Joe and Josephine Striver buy a "mini-mansion" with a "rich people's roof" - steeply inclined with many valleys and corners.  Everything is brand-new, from the appliances to the foundation, and for a decade or so, everything goes smoothly.  A yard service takes care of the lawn, and the house looks pretty good, even if the stucco is starting to crack in spots.

But after 10-15 years, well, that fancy roof needs to be replaced - and guess what?  All those valleys and the steep pitch mean it will be a bitch to re-roof, and the prices quoted by roofers reflect this.  Like aging British gentry, the middle-class Americans find themselves in a bit of a pickle.

We are experiencing this on a smaller scale - our house isn't a mini-mansion, but a three-bedroom ranch.  But everything was replaced fifteen years ago, and you know what that means.  So in addition to "regular maintenance" we have to budget for various overhauls, from new flooring, to paint, to a roof, to new appliances, new plumbing, new electrical, and so on and so forth.  We're about halfway through this, so far.

What is interesting is that at age 61 this starts to seem like an awful lot of work, and I can't imagine doing this at age 70 or so - it would just kill me, probably literally.  The only solution - if you want to stay in the house you are in - is to hire people to do all of these tasks, which gets tricky and expensive.  Tricky because unscrupulous contractors know they have old people over a barrel and as a result, they are regularly the victims of con artists.

But even with honest contractors, the cost of home maintenance is anything but cheap - particularly these days as labor costs and material costs skyrocket.  You reach a point where you wonder whether you own the house, or the house owns you.   Yet, so many people are slaves to houses, it seems.

It is a pretty funny thing, how human beings want their own 1/4-acre and a few rooms to live in, a comfy sofa and a big-screen tee-vee.  We all live in houses - or claim to want to live in houses - and some folks, it seems, never leave them.

Again, going away makes you realize this. So many people we meet "camping" are just spending a day or two in a park, only to rush back to their house so they can go off to work on Monday morning.  The idea of living in any other way is alien to them - as indeed it was to me, when I was working.  You need a place to crash, between shifts at the job, I guess.  But more than that, we want a place to call "home" - which is a nest or "crib" (interesting slang term) as well as a status symbol.

Of course, there are other ways of dealing with houses.  Many older folks let their houses fall down around them, and in a perverse manner, this makes sense.  Why bother plowing money into a house, when odds are, you'll leave it feet-first in a few years, or be trucked off to some retirement living place?  So they let the place go, and the next owner guts it and starts over. 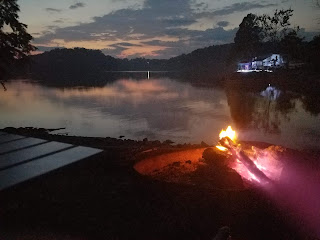 A beautiful park on the water- but it needs a new bath-house!

Which, by the way, is another approach.  We were staying in an Army Corps park in Alabama, and it was quite nice - on a lake and all.  We were in the "old section" which was a little decrepit, but the sites were right on the lake.  The "new section" had all 50-Amp service, sewer connections, pull through sites with concrete slab driveways - perfect for the new generation of mega-campers.

We were kind of disappointed at how the Army Corp had maintained the "old section" - the roads were falling apart, and the bathroom was a little creaky.  But then we realized that either they were going to close this old section completely (there were some erosion issues) or just bulldoze it all and start over with new slabs, new power, new sewer, and a new shower house.  It would be cheaper than trying to "fix" the existing infrastructure.

In terms of maintenance, they have to use their own salaried employees, who could barely empty the trash cans.  They weren't about to get on a ladder and paint the shower house.  And contracting for such repairs would be time-consuming and cumulatively, more expensive, than simply writing on contract for a whole new building.  Similarly, patching the roads, over time, would cost more than just re-paving the whole place - and perhaps changing the layout to accommodate the bigger rigs of today.

Sometimes it makes sense to start over - either with a whole new buildings, or a gut-and-remodel.  So perhaps we are wasting out time and energy by trying to "maintain" our house, when the end result will be, when we leave, that someone will come in and tear it all out, if in fact, they don't tear it all down.  We've been through this before - more than once!

Our house on Washington Road in Alexandria, was bulldozed to make room for two new houses.  Our condo in Huntington is awaiting demolition as we speak.  Mark's parents' house was bulldozed flat to make room for a "look at me!" vacation home for rich folks.  You can try to hang on to a place, but in the end, it eventually becomes a building lot for the next guy - or at the very least, a shell to re-hab down the road.

Maybe this is an American thing.  I recall my Japanese friends marveling at how we in America tear out kitchens and bathrooms every 10-15 years, if not sooner.  I was amazed at how buildings from the 1950's were so well preserved and maintained in Japan, and not allowed to become festering eyesores, until they were torn down.  On the other hand, The Imperial Hotel - they tore down a Frank Lloyd Wright structure to put up a bland Bauhaus monstrosity.

But then again, Wright.  He built not for the ages, but for the years.  If he were alive today, he would be amazed that any of his structures were still standing and indeed would be outraged they were "preserved" as museums, rather than being gutted and re-done time and time again - as he did with many of his projects, such as Taliesin.  Houses are not forever.

On the other hand, it seems so wasteful, to me, to spend so much time and energy just keeping up a place to squat - to make it "look nice" for the people driving by at 40 mph, who never notice your efforts anyway.  It is weird, but we spend a lot of time and energy in this life making things "nice" for people we don't know or will ever know.  Lawn mowing, for example, serves no purpose other than to make a nice green space for others to look at.