The Lifecycle of a Building 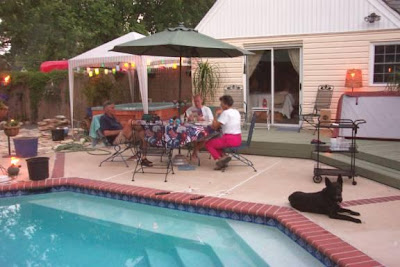 Buildings don't last forever.  When you are young, you don't realize this.  Heck, as a kid, I thought cars were a permanent thing.  But after you've sent more than one or two to the junkyard, you realize that machinery and equipment is a very transitory thing, and even with proper care, will wear out, over time.

And this is normal, and nothing to be alarmed about, but rather expected.  What is abnormal is the idea that material things are forever and not the transitory things that they are.  The Material is Mortal Error.

Unfortunately, we have to get older to realize that not everything will last forever, nor should it.  Even things built "forever" will wear out - or become obsolete or outmoded - over time.

The photo above is of our home in Alexandria, Virginia, back in 2004 or so.  We spent a lot of money fixing up that house, but it still had some endemic problems.  The foundation, resting in Virginia Clay and Marine Clay, was never very good.  And the house as cheaply built after WWII on a budget, and it showed its roots on more than one occasion.

We thought about tearing the house apart and starting over - or adding an addition onto the house to bring it up to "the next level" of price structure.  Our neighbors, who had a better made house (a more upscale model in the development) took the plunge and built a spectacular showplace.  But it did cost a lot of money - in the six figures - to complete.

Our other neighbor decided instead to move to a larger house, rather than try to add on.  They sold the house to someone who lived in it a while, then rented it.

In addition to the structural problems (which my neighbor's house also had) there were economic considerations as well.  The area had become much more populated since the days when the farmland was plowed up to build these homes (and no one thought that they would ever sell, as it was "too far away" from DC!).  The area was now part of a major metropolitan mega-city, and the land was worth far more than the two-bedroom, one-bath house built on the lot.  And the lot, being 1/3 of an acre, was deeded as two separate building lots.  The day we bought it, we realized that its real value was not as a "home" but as a building site. 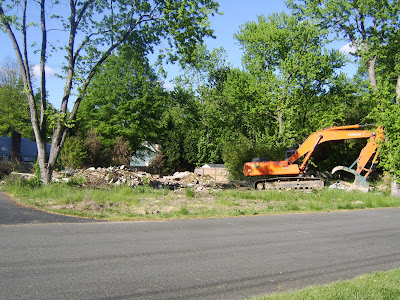 So, one day in 2006, a fellow knocked on the door and offered us more money than we could ever reasonably expect to get for the home in our lifetime if we would vacate in 30 days so he could bulldoze it.  It was not a hard decision to make.  A once-in-a-lifetime offer, or dealing with six sump pumps and a basement that flooded whenever it rained - or the prospect of throwing hundreds of thousands of dollars to "remodel" the house up to the standards now warranted by the Greater DC area.

It was no contest - we sold.  And it took them only days to wipe the house off the face of the earth. 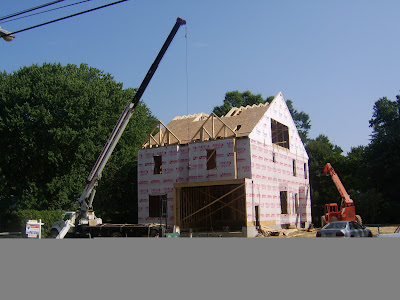 And the new home under construction....


The builder built two houses on the lot - larger homes that people today expect, with the amenities people expect.  For example, more than one bathroom.  Unfortunately, the developer delayed nearly a year before construction and got caught in the housing bust.  But the houses were sold, and people have moved into them.

Some neighbors refused to sell, on the grounds that "the principle of the thing" was more important than the money.  And by money, I am talking 3/4 of a million dollars here - for houses worth, maybe on a good day, $400,000.  And it is a shame, too, because now that the market has crashed, they will probably not get an offer like that for many, many years, if ever in their lifetime. (UPDATE: March, 2014.  The DC Market rapidly recovered, and many of the neighbors who said, "I'll never sell!" ended up selling).

But the point of this posting is that everything wears out - houses, cars, electronics - everything.  You can rebuild things, this is true, but like with our home shown above, the cost of trying to "fix" the existing house would be more than the cost of razing it and building anew.  It's called the Weibull or Bathtub Curve, and it applies to anything that is manufactured.

Granted, there are some historic structures where the cost of rehabbing them makes this worthwhile.  But the resulting structures are not "original" but end up being rebuilt piece-by-piece, at great expense, as it is far harder to remodel than build anew.

When we were in Japan, we visited temples that would have plaques on them that would read something like this:

This temple was built in the year 400 and is the oldest wooden structure in Japan, perhaps the world.  Much of the temple was rebuilt, following massive fires in the years 825, 1350, and 1780.  The temple was also rebuilt after a devastating earthquake in 1936.

Oldest wooden structure in the world?  Perhaps.  But I doubt a single beam dates back to A.D. 400, given how much of the structure was built, rebuilt, and repaired over the Centuries.

In other words, it isn't George Washington's hatchet.

When it comes to buildings, even mature adults often fail to realize that they have design life limitations.  As I noted before, we own a condo in a development where the balconies started falling off, due to concrete failure.  Then the foundations one one building started to shift.  50-year-old pipes break with regularity - and instead of replacing them all, we keep patching them as they break.  And of course the wiring, plumbing, and everything else is aging.  (The roofs have been redone several times over 50 years, of course).

At this stage in the game, it is cheaper to tear down and start over.  And like with my house, the land is worth more than the run-down condos.  If you were to rebuild, you'd build better condos - and more of them - for what is now a "close in" development.

But many residents fail to see that, thinking instead it would be cheaper to repair, repair, and repair the existing structures.  "This wouldn't have happened if the buildings were maintained properly!" they cry.  But the reality is, even concrete wears out as the re-bar rusts.  And if you have foundations in poor soil, they will shift over time.  Even the best foundations need work after half-a-century.

Hopefully, we can sell the entire condo development to a developer, and a new, better development can be built - with the owners cashing out and it being a win-win for all concerned (the County would like to see this, as it would mean more tax revenue).  The alternative is to keep throwing increasing sums of money at an ugly, dilapidated and outdated building, as it reaches the end of the Weibull curve.

In your personal life, bear this in mind, whether it is with regard to an old piece of electronics (obsolete long before they wear out) or a car, boat, motorhome, or even your house.  Eventually, there reaches a time where you have to tear down and start over - or at least gut and remodel.  Trying to "patch up" a worn out thing is never a good idea - it is the most expensive way to go, and the resulting product is substandard and unreliable.