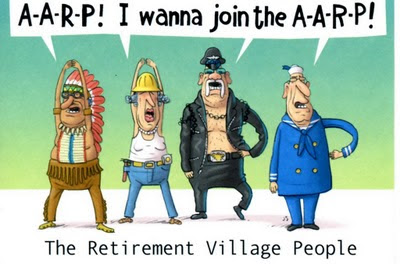 Well, now you have an idea about how AARP is run.  Not only is it not run by and for older people, today it exists only as a means of exploiting older people for the benefit of commercial interests.

As I noted before on this subject, for your membership dues, all you get is a crummy 10% discount that you could get with an AAA card (or just by asking, in most places) and subscriptions to two really crummy magazines.

The magazines are full of ads for Senior-exploiting crap like Jitterbug phones and "Gov't Gold Coins" and other junk that you see, aimed at Seniors and usually crappy deals.

And the junk mail!  They send tons of mail to you, and you-guessed-it, much of it is faked up to look like official communications or something important.  You open it up and of course it is a come-on for overpriced car insurance, overpriced medical insurance, or overpriced burial insurance.  Sending junk mail to Seniors - this is the people who are supposed to have your back?

So basically all you get with AARP is a chance for them to sell your name and address to a lot of odious people and send you magazines with ads from odious people.  And the people who work at AARP apparently don't give a rat's ass about their members.

The other half of the organization is dedicated to political lobbying.  Their positions on most issues are fairly knee-jerk and also self-centered.  They lobby for what is in the best interests of AARP, and secondarily, the membership.  And they assume that most members' positions on the issues are "Gimme!  Gimme! Gimme!" - more Social Security, more Medicare, more Medicaid.  They don't assume for a minute that maybe Granny doesn't want to see her grandchildren bankrupted.  And of course, since AARP is so heavily in the insurance business, there is a blatant conflict of interest when they lobby for things like supplemental insurance plans for Seniors.

While it is possible that your interests and those of AARP might coincide on occasion, this would occur more by accident than design.

Organizations, unfortunately, tend to take on a life of their own.  While they may start off as "Grass Roots" groups and are headed by people they intend to serve, after they've grown a while, they take on "professional" management and tend to think more in terms of what goes on in the organization's headquarters than what is important to the rank-and-file.

And they tend to take the positions of the organization to extremes - and try to use scare tactics to get people to join - and join in.  So the NRA, for example, screams to its members that "Obama is going to take your guns away!" which results in a huge spike in gun sales (good for the real client base, the gun manufacturers) and holds out for only the most extreme positions on gun issues.

NPR is another good example.  They've taken "public radio" and turned it into the de facto largest powerhouse radio network.  It no longer is a local, public radio phenomenon, but rather a network of local stations who plead with you to buy tote bags, so that they in turn can pay the onerous franchise fees to the network, so that network executives can literally make millions of dollars.  The programming, as a result, is as uniform from coast to coast as the food at McDonald's (and about as appetizing).

AARP is the same way, unfortunately.  Their real client base is not the Seniors sending in their money, but rather the insurance companies, such as the odious "Colonial Penn" insurance company.  Read this link for some interesting data (scroll down) about how AARP morphed from a "Retired Teachers Association" founded by retired teacher, into a huge conglomerate that uses its "non profit" status to its own advantage:

In 1963 Davis bought 750,000 policies from Continental and set up a holding company, the Colonial Penn Group. According to Morris, Colonial Penn's revenues grew from $46 million to $445 million between 1967 and 1976, thanks to NRTA/AARP members, which provided most of its health insurance revenues. This made Colonial Penn the most profitable company in the United States, according to Forbes magazine. At the same time, Consumer Reports published a highly critical review of Colonial Penn's service to AARP members. A U.S. Postal Service investigation into the organization's use of nonprofit mailings ensued. The post office, in fact, recommended that criminal federal prosecutors bring charges against AARP and Colonial Penn for fraud. Charles Morris and Dale Van Atta reported, however, that Leonard Davis had been expunged from official AARP histories because of his questionable reputation. In fact, he lost his insurance license in 1965 in a New York bribery scandal. Andrus died in 1967, the year the Age Discrimination in Employment Act was passed.

In 1978, after being fired by Davis, Executive Director Harriet Miller (who eventually became mayor of Santa Barbara, California) filed a $4 million suit leveling many of the same charges, contending that control of the organization rested in the hands of Colonial Penn. A 60 Minutes exposé demoralized AARP workers, members, and volunteers, and Davis left the organization in February 1979.

Read the rest of that article for the fascinating soiled history - and future - of this questionable organization.  AARP is losing members rapidly as the "Greatest Generation Ever" dies off.  The baby boomers don't yet seem poised to join.  I joined, and wish I hadn't.  In fact, I think I'll cancel my membership, as I am just getting sick of the junk mail and crappy offers and their hideous magazines.
Newer Post Older Post Home