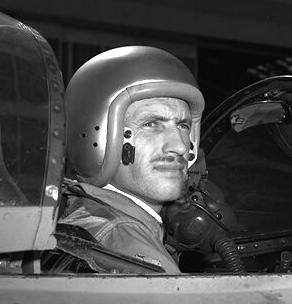 The NASA Technical Reports Server has lots of interesting images on file, such as that of George Cooper, Ames Test Pilot.  Dig that helmet!

This has nothing to do with finances.  Just a cool database to search for old airplane images.  What's not to like? 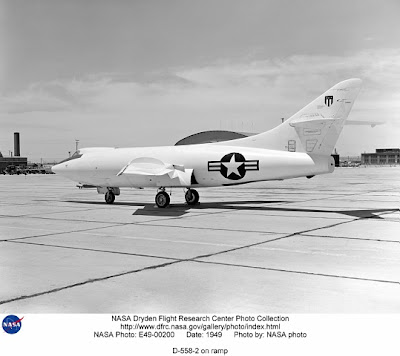 This 1949 NACA Muroc Flight Test Unit photograph shows the Douglas D-558-2 #1 at the South Base, Edwards Air Force Base. The aircraft was turned over to the National Advisory Committee for Aeronautics on 31 August 1951 after completing the Douglas contractor test flights. At this time, the aircraft was only fitted with a jet engine. Although given the call sign "NACA 143," it was only flown once by the NACA (on 17 September 1956) after being converted to all-rocket power. The Douglas D-558-2 "Skyrockets" were among the early transonic research airplanes like the X-1, X-4, X-5, and X-92A. Three of the single-seat, swept-wing aircraft flew from 1948 to 1956 in a joint program involving the National Advisory Committee for Aeronautics (NACA), with its flight research done at the NACA's Muroc Flight Test Unit in Calif., redesignated in 1949 the High-Speed Flight Research Station (HSFRS); the Navy-Marine Corps; and the Douglas Aircraft Co. The HSFRS became the High-Speed Flight Station in 1954 and is now known as the NASA Dryden Flight Research Center. 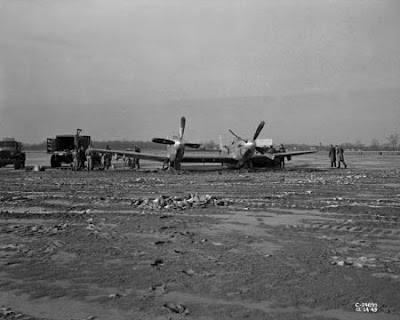 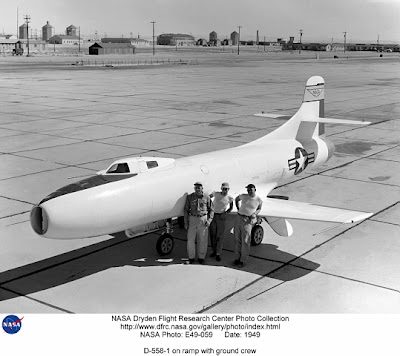 In this NACA Muroc Flight Test Unit photograph taken in 1949, the Douglas D-558-1 is on the ramp at South Base, Edwards Air Force Base. Three members of the ground crew are seen poising against the left wing of the Skystreak. The D-558-1 was designed to be just large enough to hold the J35 turbojet engine, pilot, and instrumentation. The fuselage cross section had to be kept to a minimum. Due to this, the D-558-1 pilots found the cockpit so cramped that they could not easily turn their heads. Conceived in 1945, the D558-1 Skystreak was designed by the Douglas Aircraft Company for the U.S. Navy Bureau of Aeronautics, in conjunction with the National Advisory Committee for Aeronautics (NACA). The Skystreaks were turojet powered aircraft that took off from the ground under their own power and had straight wings and tails. All three D-558-1 Skystreaks were powered by Allison J35-A-11 turbojet engines producing 5,000 pounds of thrust. All the Skystreaks were initially painted scarlet, which lead to the nickname "crimson test tube." NACA later had the color of the Skystreaks changed to white to improve optical tracking and photography. The Skystreaks carried 634 pounds of instrumentation and were ideal first-generation, simple, transonic research airplanes. Much of the research performed by the D-558-1 Skystreaks, was quickly overshadowed in the public mind by Chuck Yeager and the X-1 rocketplane. However, the Skystreak performed an important role in aeronautical research by flying for extended periods of time at transonic speeds, which freed the X-1 to fly for limited periods at supersonic speeds. 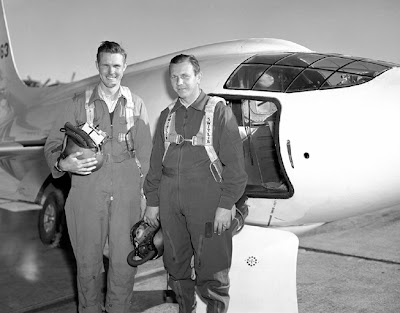 The Bell Aircraft Corporation X-1-2 and two of the NACA pilots that flew the aircraft. The one on the left is Robert Champine with the other being Herbert Hoover. The X-1-2 was also equipped with the 10-percent wing and 8 percent tail, powered with an XLR-11 rocket engine and aircraft made its first powered flight on December 9, 1946 with Chalmers "Slick" Goodlin at the controls. As with the X-1-1 the X-1-2 continued to investigate transonicsupersonic flight regime. NACA pilot Herbert Hoover became the first civilian to fly Mach 1, March 10, 1948. X-1-2 flew until October 23, 1951, completing 74 glide and powered flights with nine different pilots, when it was retired to be rebuilt as the X-1E.