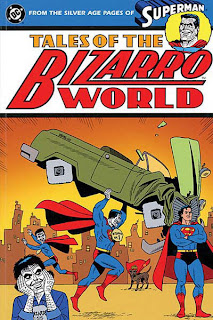 In Bizarro World, everything is backwards.

Many people in the US live in Bizarro World and wonder why they never seem to get ahead of the game.

When you think that down is up, left is right, good is evil, and spending is wealth, well, you are going to have an inevitable collision with reality sooner or later.

In my last posting about American Cars, I got some flack from people who live in Bizarro World.  According to their world view, American cars are the best on the planet, Michigan is an economic powerhouse, Detroit is a nice place to live, and any day now, those high-paying union jobs will come back - if only they can stay out on strike for another six years.

As I have noted time and again in this blog, financial success has little to do with "tricks" or "tips" for investing or making money, but a lot to do with getting your head in the right place.  So long as you believe in something for nothing and pay homage to brand loyalty and act irrationally you will end up broke and poor in the long run.

So if you believe - against all rational thinking - that "Chevies are better than Toyotas" and moreover think you should "buy American" to "keep jobs in this country!" then chances are, you are going to get screwed.

It is like people in the leasing debate - who against all rational thinking will give you specious reasons why leasing a car "makes sense".

Here's the deal.  When you make a bad financial decision, using specious logic post hoc to justify it is not really helping any.  It merely reinforces your bad decision-making and perpetuates your poor financial decision.

A friend of mine lives in Michigan and complains there are "no jobs" other than crappy minimum-wage, manual labor jobs.  I told him "Well, move South, there are many places in the Country where they are hiring like mad!"  And this is true.  But for some reason, he is stuck in Michigan and refuses to leave.

Should we feel sorry for him - or the millions like him - who refuse to come to grips with reality?

Or what about places like New York State - a failed experiment in Socialism that is starting to come apart as the "worker's paradise" taxes everyone to death.  When a State has a negative population growth, something is very, very wrong.  And yet, there are those in New York who will tell you that the answer lies in more government spending - more Socialism - not in cutting back on "big government" and the way it stifles the economy.  To New Yorkers, all the answers lie in Albany.  The reality is, that is where all the problems are.

But people who live in Bizarro World don't ever want to leave.  Because doing so means taking personal responsibility for their actions and bad decisions, when it is so much easier to blame them on the Government or Big Business, or the Chinese, or whatever.
Newer Post Older Post Home