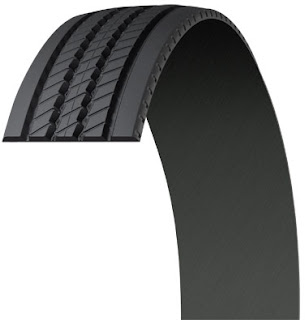 A retread or re-cap tire takes an old tire casing, grinds off the surface, and attaches a new outer tread.  In the old days, with bias-ply tires, these were a good option for older cars.   Today, they are rarely seen on automobiles, but often used on 18-wheeler trailers.  You often see the casings or " gators"  on the highway when the tread inevitably separates.

Retread tires are hardly found anymore for passenger cars.  And yet, not too long ago, they were a common option for budget-minded car owners.  But like with used tires, they probably are a bad deal for cars, and in fact, more expensive than buying new tires.

As this article illustrates, buying retread tires for a car can be a nightmare or at the very best, a bad bargain.  The article also illustrates how it is possible to be "penny wise and pound foolish" as the lady in the article buys used tires twice a year - spending more on balancing worn-out rubber, over time, than she would buying new tires.  She decides to "upgrade" to re-treads, thinking they will "last longer" and actually finances them.  The results are predictable.

I paid nearly $250 apiece for my Michelins on my X5 - mostly because they are an odd size (P255/55 R18) and thus a prescription tire.  But they have been on the vehicle for 60,000 miles now, and appear to have another 10,000 miles of tread left in them.  So even though these are an esoteric high-performance tire size, they end up being less costly to buy and mount that the string of used tires and re-caps that the lady in the article cited above put on her car.

Again, poverty-think leads to poverty.  People get it in their mind that tires are "expensive" because they cost a few hundred dollars, which is "a lot of money".  So they spend twice as much dicking around with used tires and recaps, not realizing that over time, they are spending more than they would have on quality tires.

Recaps have one big problem, and that is that if you let them get hot, they will likely throw the cap.  If you travel the nation's highways, you've seen this happen firsthand, as tractor-trailers leave "gators" on the highway when they throw their caps.  Truckers often use recap tires on truck trailers, as they tend to wear out quickly anyway, due to the scrubbing action produced when turning a trailer.

And usually, what happens is a tire gets a leak or runs low on pressure, and this causes the casing to heat.  Once the casing gets hot, the cap separates and falls off in one giant piece.

For an 18-wheel truck, this is an occasional inconvenience (and a road hazard for the rest of us).  For a car or SUV, it is a catastrophic tire failure that could lead to a major accident.  Not only that, but a tire casing coming off the tire can literally tear up your bodywork.

Again, stop fishing so far downstream - it isn't saving you any money and in fact could be dangerous.  The "nice man at the used tire store" is not your friend.  He is overcharging you for crappy tires.  Break down and buy new tires for your car, even if this means having to finance them (go to your credit union or bank and get a low-interest rate credit card, or save up your money and get out of the "monthly payment" mindset of life).  Because a good set of NEW TIRES will be LESS EXPENSIVE than crappy used ones or recaps.

This site online has listings for recap tires for trucks and SUVs.  The prices are anything but a bargain.  You can go to Wal-Mart and buy new tires for about the same amount of money.

Notice how many of the tires are for over-sized "off-road" bozo tires for jacked-up pickup trucks.  Many rednecks feel that they have to jack up their truck to make it a miniature "Bigfoot" to compensate for their tiny penis that is hidden in their folds of belly fat.  By doing so, they end up adding prescription tires to their truck - over-sized tires that can cost twice what normal truck tires would cost.

As I noted in the prescription tires posting, buying a car with oddball tire sizes is not a good idea, as the cost of replacement tires can be double that of a more popular size.  Taking a "normal" vehicle and intentionally adding oddball tire sizes to it, just for cosmetics (and please, don't tell me about how you are a rough-and-ready off-roader in your pickup truck, when you use it to commute to work) is just idiotic.  Going to retread tires as a means of affording such "mods" is even dumber.

And yes, here in Georgia, we see rednecks doing this - driving down the road in jacked-up trucks, on their way to work, with their knobby re-treads making grinding noises the whole way.  And these people can least afford it - or afford the gas.  So they whine and bitch about how poor they are and how it is all Obama's fault.

We all make choices.  And if you make poor, stupid choices, you have no one to blame but yourself.  And yet these macho men cannot "man up" to their own mistakes, but rather they whine like little school girls who have lost their lollipops, when gas goes to $5 a gallon.

Just say "no" to Poverty-Think.  Just say "no" to used tires and retread tires.  Leave then to the Truckers.  The real truckers, not some idiot in a pickup truck with lift blocks.
Newer Post Older Post Home