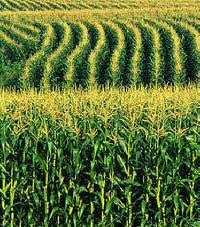 Corn subsidies, in the form of ethanol subsidies and ethanol fuel mandates have been partially responsible for the price of food to escalate worldwide.  This, in part has toppled two Arab regimes and threatens to topple more. People starve so we can drive 10 mpg cars.

Unrest in the Arab World.  15% ethanol mandates for gasoline sold in the US.  What is the connection?

Westerners are trying to label the Arab revolts as the "Google Revolution" or the "Facebook Revolution" or whatever Western-centric label they can apply.  But they might be more accurately labeled the "Corn Revolution" due to the impact of food prices.

A dictatorial government can survive for eons, provided it provides to its citizens the basic needs of life - food, clothing, and shelter.  Freedom of expression is a fine thing and all, but starving to death is something else entirely.  And when the food runs out, dictators are toppled.

And U.S. government corn policies may be in part to blame for these revolutions.  As this link notes, the unrest in the Arab world has a lot to do with food prices, which have doubled or tripled in recent years.  To Americans, this seems a fairly trivial matter, as we spend a small portion of our income on food.  Things like housing and transportation (our cars) are far more costly to us.  So it's not surprising we'd rather burn our corn as fuel than eat it.

And it isn't surprising that we've suddenly discovered "HFCS-free" foods, now that corn has another market outlet.

But in the rest of the world, struggling to obtain sufficient caloric intake for the day is a major problem.  And many people in the world spend most of their income on food.  The idea of dieting or being 100 pounds overweight is alien to them.

So, when the U.S. Government decided that ethanol was the answer to our "foreign oil dependency" problem, it subsidized the cost of ethanol in our fuels - and mandated more and more ethanol as part of our fuel supply.  As a result, the cultivation of corn in the US - which was already overblown to begin with - has gone into overdrive.  Every available acre is being planted in corn, and sales of farm equipment and Monsanto's "Roundup Ready" genetically engineered corn strains (and Roundup brand herbicide) have skyrocketed.  It's a good time to be working at John Deere.

But as the price of corn has gone up, this means less gain is available for export from the USA.  And the USA is, or was, a major exporter of food to the world.  In Japan, the word for  United States - 米国  was "Beikoku" or literally "the land of rice" due to the rice imports into that country (even with protective tariffs) after the war.  When it comes to food, we are as the Arabs are as to oil.

So, it begs the question, did we do this intentionally?  Did American "starve the world" by using its food to make fuel, in retaliation for the Arabs embargoing oil?  It is interesting fodder for conspiracy theorists.

Perhaps this theory is best summed up in this satire of a political cartoon, from the satirical website The Onion. 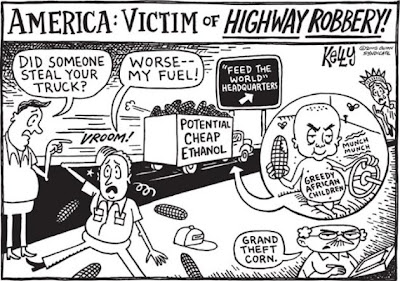 And perhaps the staggering cost of food explains the unrest in Africa, or future unrest to unfold there shortly.

And the strategy of using corn for fuel is an interesting and calculated one.  While we may be putting "only" 15% ethanol in our fuel, as I have noted in earlier postings, even small changes in the supply and demand curves can cause huge swings in market prices.  So, if we mandate 15% ethanol content in our fuels, this decreases the demand for imported oil very slightly, which in turn, drives down prices.  Conversely, it increases the demand for corn considerably, driving up prices.

(And as a side effect, ethanol, being very corrosive, tends to rot out fuel systems on older cars, effectively taking them off the road.  The automakers complain about E85, but secretly love the fact that this new fuel is forcing older cars to the scrapyard, thus spurring demand for newer "  flexfuel"   capable vehicles).

Back in the 1970's when the first "Arab Oil Embargoes" took place, many folks got upset, and noted that these same Arab countries imported a lot of their food, mostly from the USA.  Why not "embargo" our export of food to them?  But of course, an Embargo would not work, as they would merely import food from Europe, and in turn, we would have to dump our food for cheap elsewhere in the world.  This is in part why Embargoes and Price Fixing don't work, and why the Arab Oil Embargo eventually folded.  You have to sell product to survive - and eventually someone "cheats" on price fixing schemes - just as the OPEC members all do on oil production quotas.

Mandating 15% ethanol in fuel, on the other hand, drives up corn prices, and thus does what an Embargo or price-fixing scheme cannot do - raise prices worldwide.  And many folks are feeling the pain, mostly in poorer countries where food is scarce and represents a major portion of a person's budget.

But we will see this effect ripple through the economies of second-world countries and finally Western Nations as well.  Price subsidies for corn are slated to decrease next year and then disappear entirely.  But the mandate for 15% ethanol will remain - at least for the time being.

The result will be staggeringly large increases in the price of gas in the USA - by perhaps 50% or more, as un-subsidized ethanol is still required as 15% of pump gas.  And this staggering increase in the cost of fuel will ripple through the economy, forcing price increases across the board - inflation.  And since more and more corn is going into fuel, expect food price increases to be on the forefront.

And as I noted earlier, when food is scarce, governments can be easily toppled.

In the meantime, enjoy your E85 unleaded.  Tasty!

Note:  I received a nice note from a reader with THIS LINK to their website which provides an interesting infographic on ethanol fuels.  The bottom line is, this is a political solution to an economic problem - a solution that favors certain economic interests over others.  Ethanol mandates are fine for corn farmers and processors, but not the best idea for motorists...