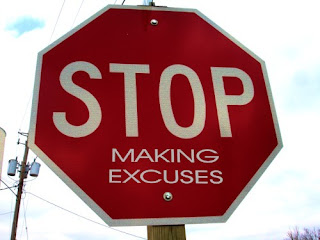 We all lie to ourselves from time to time, to justify self-destructive behavior.  The key to financial success is to stop making these excuses for squandering money - and be able to spot them.

One obstacle to becoming financially independent - and by that, I mean debt-free and enough money to retire on (which we all should strive for as a goal, right?) is the self-justification behaviors many people use to engage in destructive economic activities.  We all lie to ourselves to justify squandering money - but they are lies, and in order to get ahead financially, you have to learn to spot these lies and stop repeating them.

And they are not hard to spot - once you say one, an uneasy pit in your stomach forms, telling you the hard truth - that you are lying to yourself.

Here is an example of some of the Self-Justification lies we tell ourselves:

1.  The Straw Man Argument (Absurdest Comparisons):  You see this all the time in leasing debates.  A person will argue that you can lease a brand new econobox for "only $199 a month!" while the repairs on a decade-old Mercedes could be $2000 or more.  So there is a "savings" in leasing a brand new car, as you don't have "worry about repairs".

And it is a silly argument, as you are comparing apples and oranges - a clapped-out old luxury car versus a brand new economy car.  Yes, the older car will have repair needs.  But the real comparison should be the new car versus the same make and model car, just off-lease (1-3 years old with 30,000 to 50,000 miles on it).  A late-model used car will cost far less to BUY than it would to LEASE the same car new, and both will provide the same years of reliable service.  Well, actually, the leased car will provide three years of reliable service, until you turn it in.  The used car can be driven a decade or more.

Another example is Cable TV.  My later Sister used to justify a $75 a month cable bill on the grounds that "the cost of taking the entire family to the movies, with tickets, popcorn, and sodas" twice a month would easily exceed the cost of Cable.  So Cable TV is a "bargain".  Again, apples and oranges - as if going to the movies was somehow the only alternative to spending 4.6 hours a day with your eyes glued to the tube, channel-surfing.

The proper comparison is Cable TV versus no Cable TV, the latter of which would be $75 a month less and also incur other savings.  For example, if you spend more time at the library and read, you will end up being smarter, spending money more wisely, and your kids might end up in less trouble with the law.  Parking the children in front of the boob tube only insures that they will pick up all the poor normative cues proffered up by reality TeeVee shows like "Jersey Shore".

The list goes on and on.  People justify an obscene expense by comparing it to an even more obscene expense.  A friend living on Social Security justifies eating out in a restaurant every week on the grounds that it is cheaper than an even more expensive restaurant - and then complains about being broke all the time.

2.  "It's our only luxury!"  My sister used this argument as a back-up in her Cable TV justification.  Again, she complained about being broke all the time, but had a litany of reasons why $75 a month for cable was not a big deal (today many bills run over $100 or more).  Similarly, my friend on Social Security argued her weekly lunches at a fairly expensive restaurant were "deserved" as their "only luxury" - but again, complained about being broke.

Here's a clue: Luxuries are not a right, by their very definition.  Having luxuries is the reward for being wealthy, not something you squander wealth on while you are trying to get ahead.  You can't "reward" yourself with a luxury at age 28 by leasing a new Acura, when you haven't really accomplished anything, just as you can't "reward" yourself with a luxury when you are broke - having already squandered all your wealth on luxuries in the past.

Getting ahead financially does require sacrifice, which is a word alien to most Americans, who deem themselves entitled to certain luxuries in life.  No wonder Osama Bin Laden thought we'd collapse like a cheap tent - we are like small children in this country!

Spending money on luxuries is something you should do if you can afford them, and one good test to see if you can afford a luxury is whether you can pay cash for it.  If you have to finance a boat, motorcycle, or other unnecessary consumer good, chances are, you really can't afford the item in question.  Buy a cheaper version you can pay cash for, or forget about it.

Similarly, if you are paying $100 a month for cable, or for a smart phone with a texting plan, but are late on your credit card payments (and your balance never seems to get paid off!) then perhaps you cannot afford these things.  In fact, if you are carrying a credit card balance from month to month, it means you are living beyond your means, and you need to cut out ALL luxury items until you can get out of debt.

Buying luxury items while increasing your debt load (and decreasing your net worth) makes no sense at all.  You can't afford it.  And no, you are not "entitled" to it.

3.  "The Savings Aren't that Great!"  Again, my Sister made this argument about her cable bill.  $75 a month just isn't that much savings, in the greater scheme of things, right?

Wrong.  On a $100,000 mortgage, applying that $75 toward excess principle would shave more than seven years off the term of the loan, and knock a staggering $25,000 off interest payments.  This is not a trivial amount!  Putting that amount into savings at a meager 5% rate of return would yield over $62,000 in 30 years - a nice addition to any retirement nest egg.

And yet, most Americans have less than that in their retirement accounts at age 60.  $75 a month was too much to save?  No, not really, just that they thought that other things, like new clothes, leased cars, cable TV, cell phones, $5 coffee drinks, and other "necessities" in life took precedent.

One of the biggest obstacles I had in learning to manage my own money was overcoming this last lie (and at one time or another, I told all of these lies to myself as well!).  A few dollars a month shaved off a phone bill, or $50 a year in savings didn't seem like such a big deal - until you add up all the costs and realize that you are saving thousands and thousands of dollars a year, which, over time adds up to tens of thousands - hundreds of thousands, with compound interest - by the time you retire.

I have a simple test I use now, to get me to stop lying to myself about such expenses.  If the amount in question is such that I would stop to pick it up off the ground, then it is a savings worth making.  If you saw $10 lying on the ground, you'd pick it up, right?  Well, if you can save $10 on your phone bill, it is worthwhile doing it, isn't it?

But time and time again, we, as consumers, eschew rational savings on the grounds that the "hassle" isn't worth it.  But over time, paying $10 here, $100 there, adds up to a lot of money.  So yes, it is worthwhile and yes, the savings, overall, are great.

4.  "Everybody does it!"  Using others' actions as your normative cues is a path fraught with peril.  And yet, at one time or another in our lives, we all do it.  We see what the herd is doing and follow it, particularly if we don't have a good idea of what else to do.  Follow the herd, keep your head down, don't make waves.  Too late, we realize we are being herded up a chute to a captured-bolt gun, and only as we hang by our heels on a steel hook, bleeding out into an abattoir, do we realize that following the herd was one sure way to slaughter.

Granted, there are instances in which the herd mentality has some inherent wisdom.  Herds, after all, evolved for reasons of safety.  By banding together, a herd of animals - or school of fish - ends up safe from predators - or at least most of the herd does.  The young, the old, the infirm, the slow, are picked off one by one by the predators.

But herds can be stampeded and directed - by predators far smarter than the herd instinct.  So people, like cows, can be herded toward results that are not in their own best interests.

Justifying your own bad economic behavior based on the behavior of others is never solid or sound reasoning.  And the poorer you are, chances are the behavior of your peer group is less and less sound.  This is why payday loans, pawn shops, title pawn loan, and other "raw deals" exist in poor neighborhoods.  And it is why the "buy here, pay here" car dealers cater to such folks and why you'll see more temp tags in a poor neighborhood than in a wealthy one.


Again, I know about all these lies and self-justifying behavior as I engaged in one or more of them at one or more times in my life.  I told myself that buying a brand-new car was a good idea, as it would eliminate the "worry" of repairs on a used one already sitting in my garage.  I got Cable TV and said "it's not that expensive" and wasted hours of my day (and gained 50 pounds) before I realized it was lying to me.  And I walked away from large amounts of savings, over time, on the grounds that it "wasn't worth it" to cut expenses.

I am learning these lessons fairly late in life (compared to some) but far earlier than most.  A large amount of people never learn about money at all and end up poor and broke in their old age, mystified as to where "all the money went."  So I consider myself lucky.

But the question remains, to you, the reader.  How much longer will you continue to engage in self-destructive economic behavior?  70% of all Americans carry a credit card balance.  And many Americans never see their way out of car payments or lease payments for decades at a time.  And pathetically, many Americans reach their retirement years with less than $100,000 in their retirement savings plans.

For our 401(k) generation, this simply is not an option - we don't have cushy pensions (and pensions can go awry - ask any Eastern Airlines employee!).  Relying on a retirement on Social Security is dodgy, as it is hard to survive on such a small amount of money - and moreover, as more and more Baby Boomers retire, there will be less of such money to go around.

The choice is yours - continue to lie to yourself and lead a life of apparent wealth, or make sacrifices now, and accumulate real wealth.