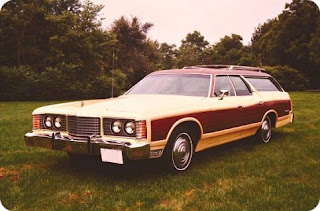 Cars like this once ruled the roads.  Today the Station Wagon is nearly extinct, killed off by the SUV.  But the few that remain are fairly nice cars.

If you go to a car show or see a movie made today that is set in an era of 30-50 years ago, you might come away with the impression that in the 1950's and 1960's we all drove hot rods, muscle cars, pony cars, or "lead sleds" complete with fuzzy dice and continental kits.

But such is not the case.  If you lived in that era or look at old pictures from that era, you will know that the station wagon accounted for a large share of the iron that ran on the roads.  Nearly every two-car family had one - usually Mom used it to haul the kids around, and on the weekends, with the tailgate down, Dad could put in a 4' x 8' sheet of plywood from the lumber yard.

Shopping car, school bus, camping machine, utility vehicle, the station wagon was useful to the average suburbanite.  But as they were used and abused and were viewed as utilitarian vehicles, they did not linger long and most were junked before the odometers went over 100,000 miles.  I suppose it didn't help any that they were the vehicle of choice for demolition derbies.

Today, few wagons are sold.  The SUV has supplanted the wagon market, which is a shame.  SUVs have the same functional room of a wagon, but are hobbled by their high suspension and tall bodies - which present large profiles to the wind and thus reduce highway mileage to the low 20's.  And most are provided with 4wd or AWD and thus gobble gas in the city as well - to the low teens.  In short, the SUV is a less practical version of the station wagon, that sucks gas.

And as off-road vehicles, most SUVs are lacking, as they are shod with street tires, have long wheel bases, and their "full-time" all-wheel-drive is not going to take you into serious off-roading country.  So I am not sure what the point of them is - as their poor gas mileage is not justifiable by their off-road prowess. But in most car dealerships today, it is all they are selling.

The Americans have killed off all their wagons in favor of SUVs.  Even the mighty Taurus Wagon is no more, replaced with a unibody SUV in the lineup. Most of the Japanese followed suit.  America is SUV-crazy and women in particular seem to like them, citing "sitting up high" as one reason for their preference.

But what about the Station Wagon?  Is it dead just yet?  Not really, and the few manufacturers that are selling them are doing a brisk business.

Subaru, for example, sells mostly Station Wagons.  And one reason I think people like them is that they are functional for the average person who wants to own just one car, and not have some monster truck to drive around - but still have space for a dog or some load to carry.  Unfortunately, of the Japanese automakers, Subaru does not have the highest quality reputation, and their cars are largely underpowered.  Worst yet, most are AWD and thus suffer from horrible gas mileage - NONE more than 30 mpg, sometimes below 20.

Subaru's gas mileage ratings are worse than BMWs, and that says a lot (at least BMW offers some diesels that get over 30 mpg! and many of their gas cars are in the high 20's.  Most Subies are in the mid- to low- 20's.  And that is just sad, and totally unnecessary).

The Europeans sell a lot of wagons - Mercedes, BMW, Volvo, and Volkswagen all offer wagons.  Mercedes, of course, makes a fine car - quality built with luxurious interiors.  While many people think that a Mercedes is "unafforable" for the average person, you'd be surprised how inexpensive an off-lease car, about 3 years old with 35,000 miles on the clock, can be.  And for a Mercedes, that is not a lot of mileage.  A friend of mine bought a 3-year-old S-class for $38,000 with extended warranty - not a lot more than what you'd pay for more plebian iron, frankly.

BMW did not import its wagons for many years, and then only brought the 5-series here.  Today, they offer both 3- and 5-series wagons (although the latest rumor is that the 5-series wagon will be killed-off in the USA in favor of another lame-ass "crossover" hatchback.  Europeans will get a very crisp and stately looking 5-wagon, however).  As I noted before, BMWs are not for the faint of heart, as they can be somewhat esoteric and costly to maintain.  However, I have noted that the newer ones seem to be more reliable than the older models (as their market share has increased).  And as a plus, a BMW can be ordered with a 6-speed manual transmission and sporting suspension.  Just because you drive a station wagon doesn't mean you died.

Volvo made their reputation on their wagon, of course.  Volvo is now owned by the Chinese, but they still make a quality product.  It is no longer the stripped-down "safetymobile" that the old 240 wagon was, but a luxury marque trying to break into BMW and Mercedes territory.  By the way, if you thought the Koreans and the Japanese were a threat to the US auto industry, the purchase of major name brands by the Chinese and India should really, really worry you.  Outsourcing is about to go into high gear.

Volkswagen sells two sizes of wagons, the Passat and the Jetta.  Both are comfortable and are offered with fuel-sipping powerplants, including a 2.0L turbo and diesel models (the latter getting an astounding 43 mpg).  The Passat wagon (below) gets 22 mpg city, 31 mpg highway.  The city mileage is higher than the highway mileage on my X5 - an important consideration in an era of sudden $5 gas.

(The new Passat is scheduled to be introduced shortly and will be made in Tennessee. In Diesel form, it may exceed 40 mpg, which is really where you should be looking, for a car to keep well into the 2020's).

Volkswagen was struggling to deal with quality issues that plagued it when it opened a US assembly plant in Pennsylvania in the 1980's.  Cars from that era tended to tear up struts, CV joints, and transmissions.  To counter this, VW offers a 100,000 mile powertrain warranty, which is one of the best in the industry.  Does it work?  Well a friend had his transmission replaced in his Jetta at 68,000 miles, no questions asked.  While it is heartening to see a warranty work out like that, it is disturbing to see a transmission fail like that.

(Note:  The VW website is atrocious, chock full of animated GIFs and providing little or no real information other than what color the cars come in.  Gas Mileage?  Engine specs and choices? Transmission choices?  Interior fabric trim levels?  Nothing.  Some HTML coders should be taken out and shot like the dogs that they are.  They really turn away customers!   Unfortunately, most automaker websites are pretty much the same). 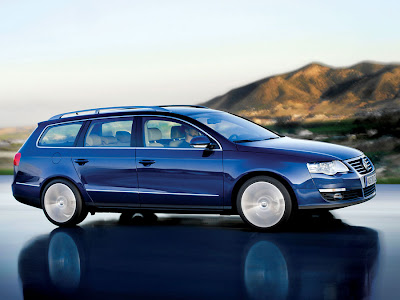 The existing Passat will be discontinued this year.  No word on when the replacement will be available.  The Jetta is still available, however.  31 mpg on the highway - not too shabby!  over 40 in diesel form!

Our next car, which we may not buy for 5 years or more (with any luck) may be the last car we buy.  So we have to choose wisely.  And in the future, we may end up with only one car, which would save a lot of money.  A station wagon is an interesting option, as it would be flexible, useful, haul a lot of cargo and people, but still get rational gas mileage.  Plus, today's small and mid-sized wagons easily fit into a smaller garage and are easier to park.  As a practical car for retirement, a small to mid-sized wagon will probably be our next choice.

It is disturbing that these practical vehicles are being killed off in favor of ugly gas-guzzling SUVs and "Crossovers" (the latest trend from both Honda and BMW are hatch-back like mini-utes that have very, very odd proportions).  They say that demand and sales are low in the USA, but of course, when was the last time you saw a station wagon advertised on television?  If you don't advertise a model, people won't buy it.   But it looks like a few wagons will soldier on - at least for the time being.

I want to DO THINGS not OWN THINGS, and while fancy cars are fun and all, I've had my fill of them.  And I'd rather cruise the Rhine or take a trip down the Blue Ridge Parkway than stay at home and make car payments or save up for gas money.