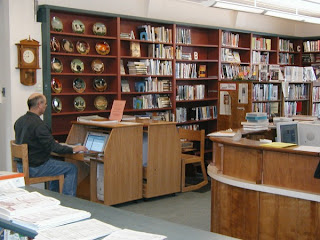 Your local library has a lot of resources, and many of them are free of charge.

As I noted in the Death of the Book Business, the model of the modern American book-store caused it to self-destruct.  Rather than selling real depth of product, the modern mega-store actually sold more volume of fewer works - and many of these works being "McBooks" by the same dozen or so authors, or celebrities, or coffee-table books written to spec.

Pretty soon, even the most astute consumer tires of spending $100 or so to buy forgettable tomes that really are not worth purchasing.  Spending $29.95 for the latest Danielle Steele hardback makes no sense, when, chances are, once you've read it, you will never pick it up again.

And spending this sort of money is doubly stupid when you can simply borrow the same book, for free, at your local library.  Granted, many local libraries may not have the "latest bestsellers!" right away, but great literature is not a Pop phenomenon.  In fact, to me, I prefer to read something that is timeless and interesting, rather than the "latest book" from one of the dozen McAuthors out there who churn out the same murder mystery, horror book, political potboiler, spy thriller, or adventure tome, like clockwork.  The fact the library has real literature for FREE is just icing on the cake.

In addition to books, many libraries have videos (DVDs and even antiquated VHS tapes) that are lent out for free as well.  While Netflix is cheap, free is even cheaper.  Some libraries even lend out CDs as well.

Many libraries also provide access to the Internet, either for free, or at a reduced charge.  If you need to check e-mail while traveling, it can be a good place to stop by.  And for poor folks who have no access to resources like the Internet, the Library can be a Godsend, in terms of putting them on equal footing with the rest of society.

The future of the public library is, of course, uncertain.  Budget cuts mean that many branches are being closed and others are being furloughed for days at a time.  And the emergence of the e-Book will be an interesting trend for libraries.  How do you "lend" an e-Book, when it is a computer file that is sold by commercial interests on a one-use-per-customer basis?  It remains to be seen how Libraries will survive and adapt into the e-Book era.

But in the meantime, they are a heck of a resource for the average citizen, and something you should support.  Most Libraries have book sales once a year to raise money - and your donation of books, CDs or DVDs can help.  If you find yourself overwhelmed with all those Danielle Steele books, why not donate them to the local library for their book sale?  Volunteering or donating to your local Library is also a good thing.

We usually visit the local Library once a week, to check out books to read.  Our library is part of a Statewide system, and as a Library member, you can request books from anywhere in the system and have them sent to your local branch.  This has come in handy, for example, when we were researching cruise ships and vacation destinations.  We ordered a number of books and they were sent within a week or so.

Back in the old days, when we thought we were "making a lot of money" we would go to Borders or Waldenbooks (remember them?) and think nothing of spending $100 buying some "books to read" and the getting a Latte for $10.  While that may not sound like a lot of money, if you do that every week, it adds up to over $5200 a year, which in fact, is a lot of money.  To earn the same amount, you'd have to make $10,000 more a year.  And as percentage of your disposable income, it is a staggering amount.

It is no surprise to me that places like Borders are going belly-up.  As our generation ages and faces retirement, we have to cut expenses to the bone - not only so we can fund our retirement, but so that we can live comfortably on a reduced retirement income.  Spending $10, $20, or $30 on a book you are going to read once and toss simply doesn't make sense in this day and age.  eBooks might be one alternative, of course, but the Public Library is free and already extant.

So take advantage of your local Public Library!  The best things in life ARE free!
Newer Post Older Post Home