The Problem With Pills 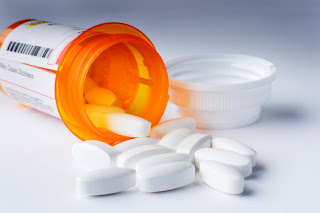 Americans love their pills.  Almost any problem in life can be cured with a pill, or so we are lead to believe.  Whether it is a bad mood or a chronic illness, your solution is to be found in a cheery little pill, that will whisk all your problems away.

And it is not hard to do, either.  When Mark was having back pains, we went to a "pain specialist" who without a moment's hesitation, offered to write a prescription for powerful pain-killers.  You want Oxycontin?  No problem.  And tellingly, much of his waiting room was filled with very young people who seemed inordinately healthy to be needing pain medication.

And it is a pretty lucrative business, too.  Get a 'script for a pain-killer from a friendly doctor, and then sell the pills on the street for several times the cost.  Or the cost may be free, if your health care plan pays for the pills (wonder why health care is so expensive?  That's one reason why).

And our society's attitude toward prescription drug abuse is remarkably blase.  For example, I was watching a television show on Netflix the other night, and one character says to the other, "Oh, want a Valium?" as if they were dispensing candy vitamins.  The casual use of Valium was a boon for the Hoffman-LaRoche.  And while on paper the pharmaceutical companies decry such use, you can be sure that they appreciate the business.

And it is all too easy to get hooked on some of these prescription pain-killers.  Ask Rush Limbaugh.  People abuse these drugs for the same reason they take illegal drugs - it makes them feel good, at least for a short period of time.  Long-term, however, they end up causing more pain than the pleasure they provide.

Or perhaps it is like some giant Karmic wheel.  When you experience the pleasure of a drug, later on you will have to pay for that pleasure with an equal amount of pain.  And if you rack up years of drug abuse by taking pleasurable drugs, the inevitable bill, when it comes due, will be staggering.  Ask Elvis.

But on a more prosaic level, many over-the-counter drugs or antibiotics that people take can have problems as well - which often go beyond mild side-effects.

Antibiotics, for example, the miracle drug of the 20th Century, made it possible for people to survive infections that just a few decades ago, would kill you.  The only problem with them is, since they have been prescribed in increasing numbers, the bugs they were designed to kill off have become more resistant to the drugs.  And increasingly, we have to resort to more and more powerful antibiotics to kill off the bugs.

And then, of course, there are side effects - which we often are not aware of.  I occasionally take Avelox, a powerful antibiotic, if I have a serious diverticulitis attack.  I try not to use it often - perhaps less than once a year or so.  While it does wipe out the infection, it does leave one feeling weak and washed-out for quite a time.

And the other day, I was trying to load a Kayak on the roof of my car, and it slipped out of my hand.  I tried to grab it and my arm twisted around and made a disturbing popping noise and then went limp - giving me the Mother of all Charley-Horses.  After applying a lot of heat and relaxing the arm, the pain went away.  However, the bicep on my right arm was now misshapen and unlike the one on the left.   I had a regular appointment with my Doctor coming up, so I asked her about it.

The bad news was that the bicep had partially detached and that generally, they do not operate to re-attach the muscle in this situation.  The muscle would still work, based on its remaining attachment, but would always look slightly different than the other arm.  She remarked, "We're seeing a lot of this with people using Avelox - muscle detachment".

Huh?  Did I miss something here?  You take an anti-biotic and your muscles fall off?  Now, to be sure, there probably was a warning paper stapled to the prescription.  Did I read it?  Did I read all of War and Peace?  But as it turns out, taking these types of powerful antibiotics can cause "tendinitis" which is a euphemism for your muscles falling off.

The message is clear here.  While these miracle drugs are a real miracle and can save our lives, they should not be taken lightly.  The idea of "popping a pill" and getting better is too easy, too pat.  Every drug that cures one thing can cause another problem.

NSAIDs - Non-Steroidal Anti-Inflammatory Drugs are another amazing invention.  If you have inflammation, they knock it right down.  Ibuprofin, in particular, has been a real Godsend for people who have arthritis.  But if you take it all the time, well, it can play havoc with your digestive tract, kidneys, and liver.

As a special bonus-fun-time feature, if you take NSAIDs with Avelox, you can end up having seizures.

But NSAIDs are amazing, and if you have inflammation (which I get occasionally with Gout) or are just sore because you are getting old and tired, they will make the soreness and stiffness go away.  And it is interesting that they almost get you "high" as a result.  As I noted in my Pain article, your brain releases endorphins in response to pain.   When the pain is removed (as when happens when a Gout attack ceases) these can make you feel almost stoned with ecstasy and elation, as the endorphins circulate through your body.

Some folks think that spicy food may have a similar effect - releasing endorphins in response to the heat - and thus cause a drug-like effect.  I can only say that I've had a Vindaloo on occasion that has caused hallucinations.  And yes, I am a spicy-food junky, I'll admit it.

And it seems that taking ibuprofin (Motrin) or Naproxin-Sodium (Aleve) seems to cause almost a euphoric effect, as the pain ceases and the body "bounces back" from pain.  There is nothing so euphoric or delicious feeling as the removal of pain.

So NSAIDs can be habit-forming, in that if you are older and your body starts creaking around, it certainly feels great to pop a Naproxin-Sodium and feel great instead.  But if you start taking 2-3 of these pills a day, for several days in a row, well, you are courting disaster in a big way.  The side effects of these drugs are directly related to dosage, and the more you take, well, the worse things can get.

Unfortunately, no matter what drug you are taking, there are likely to be "side effects" of one sort or another.  Even good old Aspirin (the grand-daddy of all NSAIDs and itself another miracle drug) has its side-effects, including gastro-intestinal distress (ulcers).  And while I was a kid, Aspirin was handed out like candy.  Today, it is considered a no-no for children.  St. Joseph's Aspirin for Children is now called "coated aspirin" and is promoted as a prophylactic for heart attacks instead of kiddie medicine.

So what's the answer to all of this?  Well, to begin with, use less pills.  Use the minimum effective dosage and use it according to your Doctor's instructions.  And avoid using pills for problems you don't have or for imaginary problems or for recreational use.  The idea that taking a pill for "fun" whether it is to get high or to get a boner, is flawed.  These things all have side effects, and should be treated seriously.

I am not giving medical advice here - talk to your doctor for specific instructions for your medication.  But I am happy that my Doctor is one of the variety that views medications as a last resort, not a first line of defense.  If lifestyle changes and diet changes can effect a cure, they are a better alternative than a pill, she believes, and I believe this as well.

In a way, pills are like taking on debt.  They should not be employed for silly reasons, but for serious business.  Taking on debt to finance school or to buy a home might be a worthwhile endeavor - if done cautiously and carefully and if you "read all the fine print" and don't borrow more than you need or sign papers on a "toxic" loan.   But taking on debt to buy a Jet-Ski or a time-share is just idiotic, always.

Similarly, taking a medication to save your life or to cure an illness - or to allow you to function normally - is important and worthwhile, provided you follow the instructions, which you have read carefully and take no more than you are instructed to take.  Taking pills to "get high" or to get an erection, well, that strikes me as recreational use, which is not a sufficient reason to risk the side-effects of such pills over time.