The Culture of Belligerence 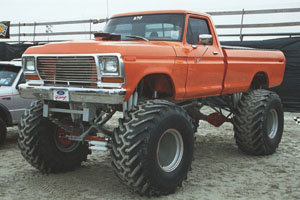 When this truck was made, trucks like this didn't exist.  The monster truck mentality is a relatively recent phenomenon.

The Culture of Belligerence is everywhere with us today - and it was not always this way.  Today, it is the norm to be tatooe'd like a criminal, to be pierced like a circus side-show freak, to dress as though you just left an armed robbery, and to project an image of toughness, meanness, and criminality.

And no, I'm not imagining this.  When I was a kid, during the "summer of love" in 1967, people didn't drive around in jacked-up pickup trucks with 6" diameter straight exhaust pipes.  People didn't drive giant penis boats with tough-sounding names written on the side.  Tattoos were something that sailors or jailbirds got.  And disfiguring yourself was just out of the question.

Heck, back then, the toughest guy we knew was Joe Namath, and he wore pantyhose.  Or Muhammad Ali, who recited poetry.

The culture of belligerence has blossomed in recent years, fostered by an "I've got mine, you get yours, buddy" kind of attitude and the tough-guy pronouncements of President Bush (a wimp if ever there was one) and Dick Cheney (ditto).  Professional wresting, which was laughed at back in the 1960's, is taken seriously today, and steroid-infused pumped-up wrestling stars are our new role models - and their hostility and shouting our new behavioral models.

Men, 50 years ago, were considered "in shape" if they weren't too fat.  Superman, Batman, and Captain Kirk, all had middle-aged bulges and flimsy biceps.  Today, everyone goes to a gym, it seems, to build up ripping abs and big arm muscles.  We have to be tough, dammit!

And part of this mystique is to have a bad-ass hog.  Motorcyles, once confined to enthusiasts, are owned by nearly every working Joe, who fits them with ear-splitting pipes.  And at a traffic light, they will be sure to gun the engine right next to you, just to annoy you - to make a point.  Whaddya gonna do about it, pussy-boy?  I'm a bad-ass!  Fuck you!

Don't have a bike?  Get a boom-boom stereo and crank it up at the traffic light, until it literally pains the people in the next car.  That will show whitey - even if you are white yourself!  You're a bad-ass rapper dude!  Probably selling drugs - maybe a pimp - surely having a loaded handgun.  That's the role model, anyway.  Don't mess with me! - that's the message they are projecting.

And bad-assedness is the new status.  Rock stars and rap stars measure their success by the number of arrests and convictions - or number of trips to re-hab.  Owning guns and shooting people with them is part of the landscape, even for high schoolers.  Having a really wicked-looking knife is de rigeur - knives than didn't exist 30 years ago (I blame Rambo for that trend)

And women - well the ones who aren't bad-ass themselves are "bitches" or "hos" to be pimped, abused, used, and of course "bitch-slapped".  That's what real men do, anyway, beat their women.

Cars are sold today based on how tough or mean they look - menacing grills that don't spell speed or style or grace, but a shark-like mouth set to devour the competition.  It's all about looking like a toughie or hoodlum.

Violence, criminality, overdone masculinity, loudness, misogyny - its all part of the package.

And why is this?

Go back with me, a few decades, to the innocence of the 1960's.  Back then, bad people were bad people.  You didn't fly the "rebel flag" unless you were a Klansman - a bad person.  Today, it is all about asserting your "rebel heritage".  Perhaps we didn't so much eliminate racism so much as drove it underground.

Heck, back then, when you called someone a backward, illiterate redneck, they would hang their head in shame.  Today, these are considered to be idealistic goals to be striven for.  "I'm proud to be a redneck" one bumper sticker proclaims.  Ignorance is Strength!  Where have I heard that before?

Or consider the cars of the 1960's.  A 1965 Mustang looks like a wuss-mobile compared to the aggressive styling of the cars today.   If you put straight pipes on your Harley back then, you'd get a ticket before traveling a block.  Today, the off-duty cops have them.

Did we have violence back then?  Yes, but it was considered more reprehensible, I think.  Today, it is accepted.  We watch television shows that have the hero chain-sawing up an innocent young woman, and we root for the guy behind the saw.  Back then, such things were just not shown on TV - or in the theaters.

And the idea of a video game that awards points to children for shooting prostitutes in real 3-D would surely seem alien to folks of that era.  Today?  We wean our children on it, while experts argue whether such material is indeed "bad for kids".  The jury is still out on that one, it seems.

Perhaps we can't go back to a Dick and Jane kind of world.  But perhaps we can move away from this ultra-machismo, dumbed-down kind of world we have created for ourselves, where heros are measured by the size of their muscles, and not their brains.

Because, let's face it, most of it is sheer posturing.  The guy with the obnoxious exhaust or stereo at the traffic light is not some bad-ass out on bail awaiting trial, but probably an accountant.  And the fellow wearing the bandanna sporting the gang 'tats probably lives with his Mom.  We mimic the criminal class, to shock, to surprise, and perhaps to empower ourselves.

Empowerment.  Perhaps that is the reason for this new mode of living.  People feel un-empowered, and one way of flaunting apparent power is to project an image of badness.  You may have more money than I do - you may in fact control my life - but I'm dressed up in a Halloween costume of a bad-ass dude, driving my jacked up pickup with big tires.  That makes me intimidating to you and your ilk!

That may be the key, right there.  Our generation feels less empowered than previous generations, and looking scary is one way of intimidating people and trying to turn the tables.

To be sure, many generations did the same thing, albeit on a smaller scale.  The greasers of the 1950's may have looked proto-punkish.  But heck, did James Dean ever scare you?  Or even your parents?  Not without a cause.  And while the hippies of the 1960's might have looked "scary" to the oldsters of the day, most of the "flower children" of the day were fairly harmless looking, the Manson family notwithstanding.

Today, it is not about just looking different to disturb the previous generation, but to intimidate as well.  And it is not limited to young people.  Many middle-aged people fall into this mindset of loud cars, boats, and bikes, and sport the tattoos and markings of gang members.

I am not sure I am expressing this clearly, but the phrase Culture of Belligerence struck me, while I was in South Florida, which is the capital of the culture.

While at a traffic light, a fellow pulls up next to me on his "Hog", replete with straight pipes.  While waiting for the light to change, he guns the engine over and over again.  Nevermind that modern Harleys, with electronic ignition, hardly need to be revved at a light - the point was to create an ear-splitting sound to annoy others - actually create sound above the threshold of pain.  The point was to intimidate - to be hostile - to be belligerent.

And the point is to say, "whaddya gonna do about it?  I can inflict discomfort on you - even pain - and you are powerless!  Ha ha!"

And you have to wonder, what does the fellow get out of it - other than some transitory feeling of triumph - and string of payments on loud bikes, boats, and trucks.

And it dawned upon me that in South Florida,  this sort of attitude was everywhere - Men and Women all playing dress-up, in a way, trying to look criminal, whether it was in their hoodies, or wearing stocking caps over their heads.  And the same people who had the loud bikes also had the loud cars - and the obnoxiously loud boats as well.

It was and is an odd phenomenon.  People who are, well, overcompensating for something - small penis?  Mother who never loved them?  Made fun of in High School?  What?

Because when you think of it, who wants to live that way?  Why would it be enjoyable at all in life to go around being mean to people?

But scarily enough, some do, and I've seen it firsthand where these sorts of people get together and breed, and raise little belligerent children, carefully nurturing them in the art of bullying and intimidation.

I am not sure what the answer for this sort of behavior is.  And perhaps I am just getting old, and this is just the way the world is going to be from now on, and we'd all better get used to it.

But I guess what disturbs me most of all, is that few people seem to recognize that a fundamental change has occurred in our society in the last few decades.  We are being boiled like a frog on a pot of water.  If you raise the temperature slowly enough, he won't realize it - and he won't jump out.
Newer Post Older Post Home