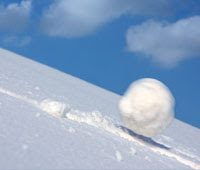 Like a snowball rolling down a mountain, the effects in savings accumulate and accelerate over time.  So do the effect of debt and interest payments!


I am running my taxes on Turbotax, and for the first time in years, I will be getting a refund on my taxes this year - several thousand dollars worth.  Why is this?

To begin with, I don't have to make a huge amount of money any more to keep the bandwagon rolling.  Since I have no debts, I have no debt service - no interest payments, no mortgage payments, no nothing.  this knocks tens of thousands of dollars off my expenses, which means I can cut my income by nearly DOUBLE that amount and have the same level of disposable income overall.

Getting out of debt and saving money has a snowball effect - a good one.  One saving leads to another and pretty soon, you realize you can live a pretty nice life on hardly any money.

On the other hand, the debt lifestyle has an opposite snowball effect -  each debt increases the amount of monthly cash flow you need to service that debt - in terms of paying back not only principle, but interest as well.  Pretty soon, you are chasing your tail, trying to make more and more money to pay more and more debt.  Many folks spent 1/3 of their income on taxes and another 1/3 on debt service - or more - leaving very little for themselves.

So, once you get off the consumerist bandwagon, the savings really start to add up.  And if you are facing your retirement years and wondering how much money you'll need to retire, well, the good news is, if you can get out of debt, learn to live on less, well, you don't really need a lot of dough to live comfortably.

In addition to taxes, you see the snowball effect elsewhere.  For example, since I own my cars free and clear, I don't have to make car payments.  And since they are older, but well cared-for, I don't need collision or comp insurance, or other junk coverage, so my insurance costs dwindle to $30 a month.  And since they are older cars, the cost of renewing the license plates (the Ad Valorum tax, as they call it here in Georgia) is smaller as well.  If I owned an less esoteric car, my savings would increase further, as I would not require prescription tires, motor oil, or premium gas.

And my lifestyle is hardly that of a Monk, either.  I live on a retirement island, have a nice house, two BMWs in the garage, and just returned from a cruise.  Hardly privation.

But I make different choices - better choices.  Instead of going to the mall to buy new clothes all the time, I buy good clothes that are serviceable and timeless.  A tailored sportcoat is not that much more than trendy wear from Aeropostal, but it lasts a decade or more.  And a vintage all-leather suitcase can be had at a garage sale for $5, which is $100 less than the state-of-the-art roll-around piece of junk they sell at the mall.  And who looks classier, when checking in?

Or checking out books for free from your local library, instead of spending $100 on forgettable tomes at Borders (or worse yet, spending hundreds on an iPad).  Your quality of life is basically the same - if not better -but you have not spend a penny.

Or how about checking out videos from the library - or getting unlimited videos for $7 a month from Netflix, as opposed to spending $100 a month on cable and sitting around watching TeeVee all day and getting fat?  Better living, spending less.  It is not even a close comparison.

Each saving snowballs into greater savings.  And when you are the guy with cash in the bank and a 830 credit score, nothing but the best deals are offered to you, too.  Want to buy a used Mercedes for less than half the cost of new?  The guy who has to get a loan probably can't qualify for it, as his credit union won't loan on a 5-year-old car, or if they do, will want an onerous interest rate.  But you, paying cash, can call the shots.

The snowball effect is real, and it is one good reason to get off the debt bandwagon, which has a snowball effect of its own - but in the opposite way.  Once you get into debt, you stay in debt, and are offered the worst sort of deals at the highest sorts of prices.  And once you let this snowball out of control, in many cases, it becomes impossible to even get out of debt without declaring bankruptcy.  And more and more people in this country are falling into this form of debt slavery.

It is a matter of choices.  But today, even a more critical choice than in the past.  Laws have been changed making it harder to discharge debt in bankruptcy.  Usury laws have been invalidated, and laws against outright exploitation of the poor have largely been nullified.  Gambling has been legalized in most States - often with the State being the larges croupier.  More and more these days, it is easier to get into debt - a snowball effect - and harder and harder to get out.

Get out while you still can - and can still enjoy the snowball effect of being debt-free, before they take even that away from us.
Newer Post Older Post Home