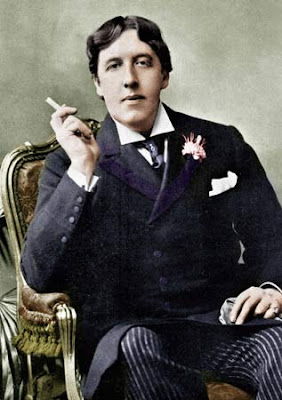 Oscar Wilde wrote an essay in praise of Socialism.   This was, of course, before he discovered that the individual could be severely abused at the hands of the State.


In 1891, several years before he would be tried by the Crown on charges of gross indecency, Oscar Wilde, wrote an essay entitled "The Soul of Man Under Socialism".  A complete copy can be found online here.

It is an interesting essay, mostly full of blather about how great the world will be under Socialism.  "Educated men who live in the East End" he writes, have studied the issue at length and will tell us all what to do.  It is, to say the least, a bit naive.

And much of the essay rails against the injustice of having to worry about providing sustenance for one's self - and how this constant scrabbling for existence can wear on the soul of man and prevent a person from experiencing their true artistic ambitions.   And while we may all feel that way on occasion, it is nevertheless the fate of man - part of our very existence to struggle to survive.  Wilde was naive to think that somehow Socialism would alleviate this burden.

"There is also this to be said. It is immoral to use private property in order to alleviate the horrible evils that result from the institution of private property. It is both immoral and unfair."

In our Capitalistic system, there can be, and is, a great disproportion in the distribution of wealth.  Part of this is due - and is natural - to the relative amount of labor done by various parts of society, and also the value of that labor.  People with scarce skills are valued more and paid more.  The star baseball player is paid more than the fellow who mows the baseball field, and few would argue this is unusual or wrong.  The market has set the price for their relative services.  And if the price is too high, well, no one needs to watch baseball to live.

And to be sure, we reward risk-takers in our society - those who invest and as well as those who take chances that others would not.  They may not view themselves as risk-takers, and in retrospect, it is easy to criticize their rewards as unjust in view of the risk taken.

And of course, in any system, there are those who game the system and receive rewards far in excess of their merits.  Wall Street is full of such folks.

But the point is, in our system, as in Wilde's day, there are the very rich, and the very, very poor.  And the very rich make a great show out of donating money to the poor, which never seems to have much effect.

Every morning, my alarm clock goes off, and NPR reminds me what wonderful people Bill and Melinda Gates are - benevolent billionaires - who sponsor "Morning Edition" and moreover donate money to some sort of foundation that will help all us little people.  They take away our money through monopoly practice - locking the world into a second-rate operating system for decades, much as the robber barons of the 1890's did with their steel trusts, coal trusts, and railroad trusts - and then hand it back to us in pittances in the form of charity.

I think he was talking to you, Bill Gates.


And of course, this applies equally as well to the fabled "faith-based initiatives" of the Bush era, which diverted much in the way of public funds to favored churches, to be handed out as largess to the masses.

These forms of Capitalistic Socialism put a good face on the accumulation of wealth, without ever really solving the underlying problems of poverty and the poor.

You make millions from owning a chain of payday loan stores, and then make a donation to your church for a new organ.  Does this make you a Godly person?  And many folks do just this, and few pastors delve into the sources of such monies or the ways in which their parishioners make it.

But all that being said, I think Wilde was more than a bit naive when he penned this paean to Socialist ideology.  The idea that the excesses of the wealthy would be alleviated by the excesses of the State, was, of course, wrong.  And Wilde would discover, only a few years later, how an individual and his artistry could be abused at the hands of an all-powerful government.

Our Capitalistic system leaves a lot to be desired.  But I put more faith in the individual than in the collective.  Putting all power - including economic power (is there any other kind, really?) - into the hands of government is dangerous.  Because governments can go off the rails and do very odious things.

Socialism sucks.  And the reason it sucks is that it places too much power in the hands of too few people, who are often and usually not accountable for their actions.  And as history has shown, Socialism does little to alleviate the plight of the poor.  Rather, it merely eliminates income disparity by reducing everyone to a subsistence level, over time.
Newer Post Older Post Home