Dieting on a Cruise?

This is a cross-posting from my Losing Weight Now! blog. 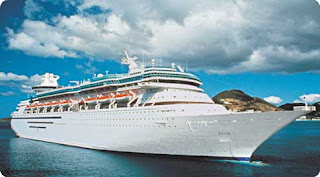 After reading books and hearing stories about people gorging themselves while on cruises (ordering 2-3 entrees at a time, eating 4-6 times per day at buffets, etc.) I expected this to be a diet nightmare, with over-sized portions of really bad food (high starches, fried foods, high fructose corn syrup laden crap, etc.).

And while some of that existed, for the most part, the food presented was healthy and nutritious and in proper portions.  Of course, it took some doing on the part of the customer to select foods that were good for you.

To begin with, we eschewed a "soda plan" because we don't drink soda pop anymore.  If you can do one thing to improve your health and at least slow your weight gain, give up soft drinks entirely.  A High fructose Corn Syrup laden soft drink is easily 100-400 calories depending on container size, which is a huge portion of a daily diet of 2000 calories.

And speaking of 2000 calories, our headwaiter confirmed my suspicion that they do hire dietitians to design the menus and that they are designed around a 2000-calorie-a-day plan, as per USDA guidelines.  Good for them.

Dinner is the only meal that is portion controlled (breakfast and lunch are buffet style) so I'll start with that.  The menu presents a number of entrees, appetizers, soups, and salads, as well as desserts - about 4-5 choices for each category (starters, entrees, desserts).  In addition, they nightly had a "healthy choice" menu.  Menu items that were deemed healthier choices were also mentioned.  They also had two vegetarian items on the menu every night - including an Indian item.

Several reviewers on epinions complained of no vegetarian items, which clearly is no longer the case.

The portion sizes were appropriate - not too small or too large.  The headwaiter noted that they were designed around an 800-calorie meal plan, about right for a dinner in a 2000-calorie daily diet.  While some Americans would no doubt feel that the portions are "too small" (no giant mounds of rice or pasta were served), I thought they were responsible and just right.  We left the dining room feeling satiated, not stuffed, and that made the experience more enjoyable.

For breakfast, we ordered room service.  Room service breakfast choices were cold items only - pastry plate, cereal, fruit, juices, coffee, and the like.  The service was fine and the items were satisfactory.  We probably went over our diet here, though, eating 800 calories or more, particularly when accompanied by champagne and orange juice.

Lunch is a nightmare of buffet lines and people swarming around the food.  We ate there sparingly, but others indulged themselves.  We had a hamburger and some plantains, probably too much starch.  They also have a pizza bar, which served OK pizza.  The problem with any buffet is portion control.  But one way to accomplish this is to get a small amount of food and retreat to a table.  By the time you are done eating, the idea of elbowing your way into that mass of humanity at the feeding trough seems repugnant, and you don't go back for seconds.

My only complaint was that there were really no healthy snacks between meals - they subscribe to the American three-meals-a-day plan, which means that by the time mealtime rolls around, you are starving and may tend to over-eat.  Plus, if you want a drink, there is rarely food to have with it.

A cocktail is better with a small hors d'ouvres with it.  And a glass of wine tastes better with a cheese tray.  And a beer goes better with a pretzel.   The way they have the ship set up, you can't have food with your drink, except at dinner, so you end up drinking on an empty stomach which is never a good idea at sea.

But overall, it was not the calorie nightmare I thought it would be.  Of course, the food was not as spicy as I would have liked it.  But as a grown-up, I realize that my tastes are not the same as mainstream America (thank God) and that they have to create a menu that caters to the tastes of the masses.  So while many items were flavorful, few were "hot".  However, in their defense, I discovered (too late) on the end of one of the buffet lines, a stack of hot sauce bottles - all untouched, of course.  Things are there, but you have to seek them out!


There are plenty of opportunities for exercise on the ship.  If you avoid elevators (we used one once, it was a Norovirus breeding cell) and use stairs, you can burn more calories.  And there is a jogging/walking path around the perimeter of the ship.  And of course, they do have a spa and gym so you can work out - few did, of course.

I was having a mild diverticulitis attack when we boarded, but it subsided by the second day.  Otherwise, I would have walked more.

But overall, it was not the sedentary, calorie-laden nightmare I thought it would be.  We may go on another cruise this fall.
Newer Post Older Post Home