Never fear failure!  It is your best friend and your best learning opportunity.  People who never experience failure usually end up failing epically.  Because they fear small failure, they court large failure.


Failure.  We fear it.  And as I have noted time and time again in this blog, fear is not an emotion to be trusted.  Fear causes us to do stupid things, like freeze, when we should run, or to buy gold instead of investing for the future.

But fear of failure is a particularly dangerous fear, and most people are staggeringly afraid of failure.

In school, you see this all the time.  The smart-alecky kids who sat in the back of the class and snickered when you got the wrong answer - and then mocked you when you got it right.  They never raised their hands, of course, out of fear - fear of giving the wrong answer and being embarrassed for a moment or two.

So they squandered their education by spending more time grooming their image for a group of peers they would know for a few scant years, instead of trying to learn something that would last them a lifetime.

We see it in business all the time, too.  I mentioned before the young hot-shot Real Estate lawyer in Virginia who seemed to do no wrong.  He came from the "right" family, went to the "right" schools, got top grades, joined the "right" firm and gradually worked his way up - starting his own law firm which became wildly successful.

Then the unthinkable happened - a Real Estate investment scheme of his started to unravel.  Rather than take a loss of a million dollars, which by then he could easily afford to do (although it would have set him back a few years) he decided instead to "borrow" money from client fund accounts - after all, he was the Golden Boy and could not fail!  But of course, this just took a small failure and amplified it many times.

By the time the scheme was uncovered, tens of millions of dollars were lost - and most of it client funds.  Not only did his business collapse, but he lost his job, his law license, his law firm, and was sued and sent to jail to boot.  And all to avoid a small failure - he created a huge one.

The Enron collapse is another example, I think, where fear of failure was at work.  People want to blame greed for the collapse of Enron, but I think it was fear that was the real cause.  The company could do no wrong - everyone was a Golden Boy and had learned how to defy the laws of economic gravity.  So when failure - a small failure - became evident, rather than take it on the chin, see the stock price tumble a bit, and then slowly recover, they decided to do some very bad things instead, so they would not fail.  But of course, all this did was take a small failure and snowball it into the largest corporate meltdown in recent history - well at least until very recent history.

Fear, and Greed - perhaps they are second cousins.

Never fear Failure.  Embrace it.  Like pain, it is a gift from God - an instructional gift, although we sometimes fail to see the merits of it.

Failure teaches us much.  But you have to be receptive to its lessons.

1.  Life goes on after failure:  This is an important lesson to learn early on.  You can get an F on your report card and still graduate.  And you can flunk out of college and still be successful (ask Bill Gates).  You can even go back to college - and graduate with honors.  Anything is possible, and in fact, most things are.  If you view failure as the end of  everything, well, then you've let failure win.

2.  Fear of Failure is worse than failure itself:  The anxiety of failure can be stifling and paralyzing.  People literally "freeze up" out of fear of doing wrong or failing.  And we know what happens to deer who freeze in the headlights - they get run over.  Once you fail badly, you realize it isn't so bad, and that the fear of failure often causes people to fail - or perform far below capacity.

3.  Failure is Instructive:  Failed a test?  Company go out of business?  Prototype exploded on the test stand?  Failure teaches us everything we know.  We learn little from success and a lot from failure.  Every failure burns into your memory and thus reinforces lessons that we often don't want to learn.  Once you examine your failures (as opposed to putting them out of your mind, the way our society preaches) you can extract much valuable data that will make you far more successful the next time around.

4.  Failure is the Norm:  Most of us fail at most everything we do.  Human Beings, by my estimation, operate at an efficiency level of about 2-4% on good days.  Most of what all of us attempt to do, on a daily basis, doesn't work out.  Think about it for a minute.  Baseball is a great analogy, and a good metaphor for life.  Most batters have very low averages - and even the best are struck out.  Rarely does a pitcher pitch a "perfect game" - we just aren't that perfect.  And you can lose game after game and still make it into the playoffs - and win the World Series.  Yes, even after failing - a lot!

Over the years, I have failed - epically and on multiple occasions.  I have flunked courses, flunked tests, and even was thrown out of school.  I flunked out of college.  I flunked numerous courses in college and even one in law school.  But I did pass the Bar Exam on the first try.  Many don't of course.  And some of our best lawyers today had to take it twice or even three times.

Failing early was a gift for me.  I wasn't afraid after failing.  My fear was gone.  I had seen what happens when you fail, and realized that it wasn't such a bad outcome.  What's the worst that could happen?  You try again.

Playing it safe to avoid failure, on the other hand, is just a slow-motion form of failure that takes years, if not decades to come to fruition.  Too late, the folks who play it safe realize that by avoiding even the smallest risks in life, they courted a huge failure over time.

And so on down the line.  By failing early and realizing that failure wasn't such a big deal, I was able to take risks.

Dumb-ass High School coaches (and yes, I am being redundant here, the cream of humanity usually applies for, and gets that job) say stupid things like "Failure is not an option!" when in fact is usually is not only an option, but a predictable outcome.  In every football game, there will be one winner and one loser - it is pre-ordained.  Failure is a clear option for at least one team.

By saying destructive things like that, it only serves to paralyze the players into thinking "I cannot make even one single mistake - I have to be perfect in every move" and as a result, they will play tight and stiff, and not loose, and as a result lose.  And when they lose, they will not be able to learn from failure as they should, but instead feel that failure is somehow a part of them - something they did wrong.  And as such, they will be even worse off at the next game, not only not having learned from their mistakes, but playing even worse as a result - being even more afraid of making mistakes and having even more low self-esteem.

And that sort of thinking is why you read in the papers nearly every day, about some troubled teen or adult, who, having experienced failure for the first time in their lives, freaks out and jumps off a bridge, such as at Cornell.  Or how some adolescent slowly loses his mind because he can't envision the transition between childhood and adulthood because of the sheer fear of failing at it (helped no doubt, by helpful parents who say things like "failure is not an option").

Killing yourself because you lost a job, a house, a car, a boyfriend, or flunked out of college, is rather stupid.  Life goes on, and often better than before.  In fact, usually so.  Failure ain't the end of the world, unless you decide to make it that.

For me?  Failure and I are old friends, along with our chum, pain.  You learn a lot from these two, if you do not fear them and do not turn away from them. 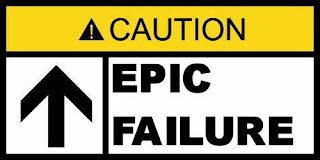