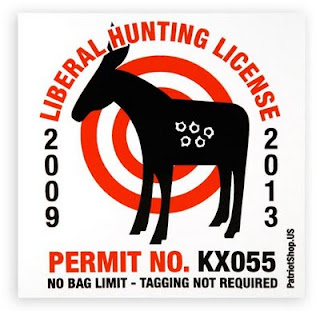 If you think this is "Funny"  you are a sick motherfucker.

In the wake of recent shootings, some people have called into question the inflammatory rhetoric used by the Right Wing in this country.  Such Rhetoric can be dangerous when imbalanced individuals take it seriously.  Does the left engage in such violent talk?

From what I have seen on the Internet or read in various sources, the answer is a clear NO.

There are no shortage of websites, signs, posters, and other "humorous" articles that suggest that shooting Democrats or Liberals is an acceptable political strategy.  And of course, hateful talk radio hosts are suggesting that if voting doesn't work (e.g., your crackpot views don't appeal to a majority, in a Democracy) that armed violence is acceptable to enforce your minority views on the majority.  Gee, the Taliban would certainly agree with that!

Such talk is sick, of course, but it is harmful?  Yes, and let me tell you why.

Some people in this country are more than a little unhinged as it is.  All you have to do is suggest to them that violent action is a good idea, and they will follow suit.  The Oklahoma City Bombings were a product of this sort of "hate speech" - far-right Christian hate-talk and "novels" which advocated or fantasized the overthrow of the US Government or advocated paranoid conspiracy theories.  All the Timothy McVeighs of the world need is some pretext to be "martyrs" to the cause.

And you know the type, too.   Young men, age 18-35 who spend all their time obsessing about conspiracy theories or being political junkies - bending your ear for hours at a time, tell you that "but for" some government action, we'd all be millionaires without ever having to work.   They are just lazy losers, who don't want to look inward at their own actions and take responsibility like real men do.  And yea, a lot of them are closet cases, as well, which is why they have a need to obsess about guns - some sort of penis fetish.

And as I noted in a previous posting, this is how terrorists recruit suicide bombers in Iraq and Afghanistan.  Find an unhinged individual, make suggestions to him or her, and they eagerly volunteer to be "martyrs for the cause".  Of course the leaders of such organizations are too smart to volunteer for such duty.

In the wake of the tragedy in Arizona, many on the far right - the same hateful people who spread violent hate-speech, are once again "targeting" Democrats and Liberals, claiming that it is the left that is politicizing the tragedy, when the real cause was merely mental illness.

Nice try, but no sale.  When John Hinkley shot Ronald Reagan, he did so to impress Jody Foster.  Clearly he was also unhinged, but his motivations were not political, merely deranged.  But in the recent incident there is more than a casual connection between right-wing conspiracy theories and the incident, as the deranged young man in this instance, clearly subscribed to a lot of the talk that the Right is putting out.  I would be willing to bet he listened to a lot of right-wing talk radio and was on a lot of right-wing websites and chat groups.

Hate-speech, hate-radio, hate-websites, and hate-politics was the gasoline on the fire of adolescent schizophrenia and psychosis.  These hate-sources provided the focus - and literally the "target" for his rage.

Would the tragedy in Arizona not have occurred without such foolish talk?  It is hard to tell.  I suspect that at the very least, the deranged young man would not have picked a political target for his vendetta.

But what is clear to me, anyway, is that responsible political leaders have to step up to the plate and condemn, in very strong terms, any talk of political violence, regardless of whether it is supposed to be "funny" or not.  And Republicans in particular - if they are to ever win a majority of support in this country - have to make it clear that they do not approve of this sort of talk, nor will they accept endorsements or monetary support from individuals, talk radio hosts, or anyone else even tangentially advocating the violent overthrow of our government.

As I noted in a previous post, a civil war in this country would be won by no one.  It would destroy our economy and our place as a world power.  Our currency would be worthless, and property values would plummet.  In short, utter chaos would reign, and no one would end up richer or happier as a result.

If you really think this is a desirable outcome for anyone, you are as deranged as the young man in Arizona.  If you consider yourself a Republican or a Conservative, the best way to advance your agenda is to convince those middle-of-the-road voters that voting Republican is in their best interests.  When you tie a conservative agenda to far-right violent fringe groups, you will lose that middle-class middle-of-the-road voters, and lose elections.

Now of course, the far-right is quick to jump in here, accusing Democrats of trying to "regulate Hate-Speech" and "Censorship."  According to their twisted world-view, advocating violence is OK.  And you know what?  Yes, all sorts of bad speech is protected by the first amendment - everything from the "Hit Man's Manual" to "How to Build a Bomb" books.

And that is the key - respectable people.  Time to Grow UP, America!  Let's put this juvenile crap in the dumpster where it belongs!

And if you consider yourself a Christian and practice this sort of hate-speech, I have a clue for you - Jesus is sending you to the fiery place when you die.  God is love, not hate! 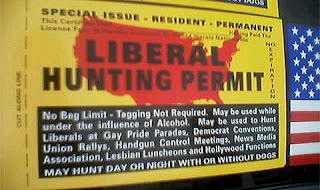 If you search online for "Liberal Hunting Permit"  you will find tons of images like this, and websites galore.  Funny thing, though, when you search on "Conservative hunting permit"   or "Republican Hunting Permit"   nothing comes up.  Perhaps Democrats don't use the Internet?  Or is something else going on here?  Again, if you think this is funny, you are as sick as that stupid kid in Arizona.
Newer Post Older Post Home