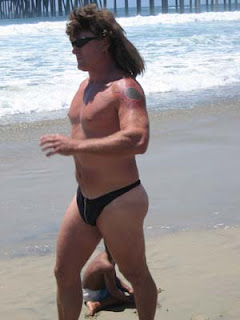 I saw a guy who looked almost just like this on the Beach in the Bahamas.   He had the most wicked mullet I have ever seen - it went all the way down to his ass.  He was holding forth on his debt-laden lifestyle.  Listen....


So there we are, on the beach at the utterly tacky and over-the-top Atlantis Resort.  It was like visiting Branson, or Disney, or Vegas - it was so over the top you could appreciate it at two levels - face value or irony factor.  We did both.

But, hey, a beach is a beach, even if there is someone shouting, "You want coco drink, Mon?" every five minutes.  But before we moved to a more remote and nicer beach, we were parked behind a family of four who talked very loudly, and at length, about their personal finances.

I felt like someone slowing down to rubberneck at a bloody scooter accident in Nassau (and yea, we saw that, too).  But I had to listen, it was so, well, intriguing and illuminating, if not simultaneously repulsive and scary.

The fellow in question went on about all the stuff he had bought - Jet Skis, four-wheelers, hobby cars, bass boat - and how he built a pole barn to store it all.  "Hell, we hardly even use half of it, anymore" he said.  He also said, "Heck, I'll be retired or dead before I get them all paid off!"

And then here was the kicker, he fessed up to having over $19,000 in credit card debt as well.  Ouch.

And yet here he was, taking a cruise, which would have cost him and the wife a minimum of $1200, not including Mullet Pomade.

It was an interesting experience, as it confirmed to me that debt really is the American way of life, and some folks are so blasé about being in debt - for staggering amounts - and mostly for trivial things, like internal-combustion engine powered toys, meals at chain restaurants, and yes a Bahamas cruise (which I am sure he tacked onto his $19,000 credit card debt).

And I know this as I did some of this sort of idiocy in my life as well.  Gee, we paid down the VISA bill $2500, what can we buy now?  That sort of thing.

And what is sad about it, is that this sort of chronic debt condition forces you to work harder than you need to, and get less money in the process.  That $10,000 Jet Ski languishing in the pole barn will cost $15,000 with interest, over time.  Those $10.99 Nachos at ChiChi's will cost $30 with interest, when paid for with a credit card with a revolving debt amount carried over months, rolled over to other cards, and then rolled into a home equity loan.  Spending 30 years on something you pooped out in a day seems kind of like a waste to me.

So how could our friend mullet get out of this mess and live a better life?  Well, to begin with, he would want to do so - the hardest part of getting out of debt is choosing to do so - realizing that money can't buy happiness, but it can buy all the misery you can stand.

And it is a decision that most folks never make.  They don't want to be seen as "giving up" on their hobby vehicles, which, having depreciated rapidly (and which are likely broken beyond repair) aren't worth much in resale, "so I might as well keep them!".  And they don't want to be laughed at by their friends and neighbors (they think) for being "poor" by not having "things" when in fact they are poor because they have them.

Having a pole barn full of expensive junk that you never use makes no sense.  Going on a cruise vacation and putting it all on an already overburdened credit card makes no sense at all.  Sell off the junk, pay down the debt.  Cut back on expenses and stop taking cruises until you can pay for them in cash.  And stop wasting even a dollar on a mullet - it looks like crap.

Harsh advice?  Well, yes.  But it is advice I took myself.  We sold off all the "stuff" and paid off all our debts.  And yes, we even cut our own hair now, which sounds stupid until you realize that at $20 a haircut, you are talking about hundreds of dollars a year in savings, which is not trivial.

I felt bad for mullet-man, as he clearly wasn't happy about his debt load and what it was doing to him - hanging over his future like some melting icicle.  But I doubt he will do much to cure the situation himself.  It is far easier to blame Obama or the "big corporations" for your troubles that to look inward and say "Gee, I really screwed the pooch, here, and I need to change things in my life."

A haircut is a good start.  A rechargeable Braun is on sale for $18.95 at Bed, Bath, & Beyond.
Newer Post Older Post Home