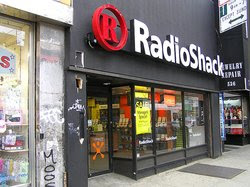 What is the Business Model of Radio Shack - this week?
This humorous article in The Onion got me to thinking about Radio Shack - how does this place stay in business?

Like Sears, the reputation of Radio Shack has always been somewhat mediocre.  During the heyday of the stereo business, back in the 1970's, the local stereo shops had little to fear from "the Shack" as most of their equipment was fairly middle-of-the-road stuff and rather overpriced, for what you got.  If you ran downstairs on Christmas morning, hoping for a new Stereo, you would sort of go, "Oh, it's a Realistic" if Santa didn't want to shell out the bucks for that Pioneer you really wanted.

To be sure, they had some well-branded products.  Just as Sears had its Craftsman tools, Radio Shack had its "Mach One" speakers, which appealed to a generation of heavy metal suburbanites.  They also sold a line of small Realistic bookshelf speakers in heavy metal or wood cases that garnered good reviews.

They had their own oddball brand of batteries, too, which I never thought of as good as, or long lasting as, Duracells.  You bought Radio Shack batteries because you were in the store, not because you sought them out.

And of course, it was always the place for the hobbyist to go for solder, resistors, transistors, and other electronics hobby items.  For our lab courses in EE school, a regular trip to the Shack was a rite of passage for the various projects we soldered together.

But of course, the market has changed over the years, and Radio Shack has tried to change with it.  But some of those changes dumped their most famous brands along the way, introduced new ones, and then dropped those.

Radio shack got into the PC market early with the Tandy TRS-80 computer - but we all know how it works out for first-to-market.  By the 1990's, they got out of the computer market, leaving that to the online catalog stores (Dell, Gateway) and the other "brand name" computers.  It is unfortunate that they could not leverage their expertise here, as people continually need assistance and help with computers, as evidenced by the proliferation of small computer "repair" shops and "geek squad" cars.

After dropping the Tandy line, they got back into computers, but by that time, dedicated computer stores were viewed as a more serious option.   Today they sell the low-cost Acer and Compaq lines, at prices that are, well, competitive but not particularly spectacular, from what I can see.  Just OK prices are not a compelling reason to visit the store.  I can buy cheaper online.

They then lurched into cell phones, which seemed like a booming market.  But the major wireless carriers all have their own storefronts now, so Radio Shack ends up being a reseller - and one that had to change carriers halfway through the game.  Once again, cell phones were being sold on brand name, and thus the store branding of phones was not even an option.

Every Christmas, they fill up the stores with cheap radio-control cars.  But how can that prop up the chain?  Similar toys can be had at other stores for better prices.  Can impulse purchases really be enough to prosper?

Over the years, Radio Shack has largely resisted selling name-brand electronics, particularly competing brands.  As a youth buying stereo equipment, I could go to the stereo store and pick from a wide array of brands and models - much as you can do today at Best Buy, or could, at Circuit City (remember them?).  Of course, a Home Theater In A Box (HTIB) can be had for $150 at WalMart or the wholesale club these days, so why go to a "stereo store" at all?

So what is the raison d'etre for a Radio Shack store?  If I need a computer monitor cable, I can likely find it at the local Staples or WalMart.  The Shack has less and less of the esoteric kind of stuff that we used to go there - the cry of "Well, Radio Shack will surely have it!" is gone from the lexicon.  Radio shack, lately, has bubkis.

I watched this transition over the years, and it was, to say the least, puzzling.  Every time I would go to a Radio Shack store, the focus, products, brands, and marketing strategy would appear to have changed.  I would go one week to buy a Realistic brand bookshelf speaker for my surround-sound system, and then the next week, find they had changed over to RCA brand.  Then a few years later, they dropped that and sell something else.

What's more, the chain has a huge number of stores, which translates into a lot of Real Estate liability.  What is keeping it all afloat?  It is a question for the ages.

Some folks claim that the few ham operators or hobbyists buying resistors or parts are enough to keep it going.  I am not sure about this theory myself, as the number of hobby parts has shrunk considerably.  And as for connectors and wires - you can buy these anywhere these days - Best Buy, Staples, Home Depot, Lowes, WalMart - you name it.  Cables and connectors do have a high mark-up, so others have flocked to the field.

And going forward, I think more computer cabling will be standardized to the point where the need for esoteric cables will diminish.  The USB port has killed off Centronix, at least for consumer use.

And the reputation of the brand "Radio Shack" as I noted at the beginning of this piece has been, well, like Sears - sort of electronics for schmucks.  Our generation was weaned on exotic Japanese and German brands - we want a Nakamichi, not a Realistic - never mind whether the brands are mere halos or if in fact the products are the same under the case logos.  Like Kenmore, there is not a lot of equity in the brands - in my opinion.

This article claims that the chain might be a takeover target in 2011, as rumors about that Best Buy might purchase the chain, just for the Real Estate.  That might explain the somewhat high stock price ($18.15 a share).  I am not sure what BestBuy will do with the locations, as they are much smaller than BestBuy stores, unless they wanted to make mini-BestBuys our of them.  If they make this move, it could be the straw that breaks BestBuy's back.  Remember Circuit City?

The stock has paid an annual dividend of 25 cents a share for the last several years, or about 1.3% return on equity.  This is not exactly a stellar rate of return, and one wonders why the management doesn't just use that money to improve the chain, instead.

Internet commerce also is troubling for both Radio Shack and Best Buy.  As I noted, the stereo market has gone downscale and to discount stores.  And the population has aged significantly.  The market for high-end stereo (indeed the market for music in general) has declined remarkably  (I was in my home town the other day, and the "high end" stereo store I used to go to as a kid, to drool over the Kenwoods, Sansuis, the Pioneers, etc. is now a vandalized shell of a building).  Much of this sort of equipment can be bought online or at a warehouse shop.

I bought my last six computers online, at the manufacturer's websites (three Dell PCs, a laptop, and two Gateways).  And that was over the last decade.  Why pay for brick and mortar when you can just point and click?  I would tend to buy online, or at a discount store, and increasingly, more Americans are doing the same.  As internet sales rise, there is a direct drop in store sales - except perhaps for accessories.

And like Sears/Kmart, Circuit City, and other "brick and mortar" stores attempts to "go online" I suspect they will be difficult.  With a higher margin and overhead to deal with, they cannot go head-to-head with discount prices from competitors who have little more than a post office box and a rented storage locker.  And I suspect that most of these "brick and mortar" chains will have to deal with internal competition from the retail side, who thinks internet sales will "cannibalize" their store sales.

I looked over their website just now and they have some OK prices on some items online, and like Circuit City, wants to do the "web-to-store" delivery option, which is an opportunity to make a secondary sale to the customer.  However, as an Internet buyer, I prefer web-to-myhome delivery, as it saves me a 15 mile drive.

Will Radio Shack survive?  I don't know.  I think, like with Sears, they can flog the chain for a few more years (closing stores, trimming staff, trimming margins, as they have been doing for the last few years) before the inevitable catches up with them.  But you can only trim and close so much - you cannot shrink your way to long-term profitability, as Sears/Kmart is finding out.   But I am not sure they can successfully re-brand themselves as the "go to" place for electronics with our generation.  The target audience for the store is aging, and while they are marginally profitable now, I am not sure how they can keep all that Real Estate afloat and still make money, with so many options now available to consumers.

Perhaps I am wrong about this - perhaps the management can turn around the company and give the Radio Shack name some chic and sophistication.  But let's just say I'm not going to be buying the stock anytime soon.  If the BestBuy buyout rumor turns out to be false, I am not sure how the company can justify an $18 share price for very long.

Retail lease space is not an asset anymore, but a liability.  BestBuy can just rent space, if they want to expand - with the overbuilding of retail space in the 2000's and the number of companies going belly up (Circuit City, for example) there is no shortage of retail space to be had.  Why pay a premium for a chain of stores you'd have to shut down, rebrand, and start all over with?

So I wonder about the BestBuy rumor.  Can the people running BestBuy be that dumb?
Newer Post Older Post Home