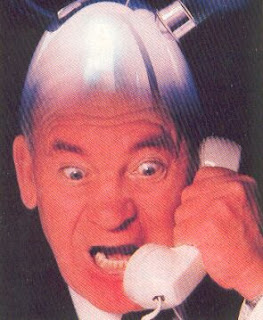 Anger is not a very rational way to analyze things.

Angry Rhetoric is not very useful when discussing rational issues.  And yet both sides in political debates use such rhetoric all the time - not to sway the debate among the powers-that-be, but to get voters and citizens "fired up" on the issues.   It is a form of Baiting behavior.

And sometimes it works, all-too-well, particularly on deranged individuals.

For many Americans, this sort of Angry Rhetoric is disgusting and a turn-off.  One reason many people have turned away from the Republican Party is because of its childish name-calling and inflammatory and dangerous Rhetoric.  For example, the Republicans are voting on a meaningless measure to "repeal" the Health Care law - and naming it the "Repeal of the Job-Killing Health Care Reform Act" which is, well, to say the least, just embarrassing.  If that is what being a Republican is all about, then no, I am not a Republican.  I am not that stupid.

It is like a small child calling you a "doo-doo head".  I mean, really, is the Republican Party not above Kindergarten name-calling?  If the Republicans want to win votes, they have to stop pandering to the really, really stupid people in the United States - the sort of nutjobs who show up at these rallies with their crackpot signs.  One reason the Republicans lost Virginia in the last Presidential election was that they lost Northern Virginia - normally a Republican stronghold.  And one reason they lost it was that educated people turned away in disgust from the infantile name-calling and the low intellect of Sarah Palin.

If Sarah Palin represents the Republican Party, then a lot of people will be turned off.  But of course, she doesn't - in fact her 15 minutes of fame are fast evaporating, as she milks her time in the spotlight for as much cash as possible.  Even she realizes that her chances of long-term political success were slim to non-existent.  Reality shows are not "Presidential" - nor is quitting your job.

The Democrats did a better job of keeping that sort of extremist element in check during the 2008 election.  The Republicans went after it, whole hog, and made it the centerpiece of the last Presidential Campaign.  It backfired.  And if you think the last election of 2010 was a "validation" of Republican values, bear in mind that mid-term elections should be a time where the party out-of-power gains a lot of seats - and by that measure, the Republicans failed miserably, failing to win the Senate or a filibuster-proof majority in the House.

Republicans are pandering to this low-income, low-education group, who view intelligence, education, and intellectualism with suspicion.  While this may get votes in some places, it doesn't necessarily win elections everywhere.  And it is an anti-civilization message, at its very heart.  We are a technological country, and if we turn against education and intelligence, we will lose our place in the world.

It is possible to be conservative and also intelligent.  Barry Goldwater and Ronald Reagan never sank to this sort of level of name-calling and inflamed rhetoric - at least not as much as the current crop of know-nothings have.

Radical extremists use this type of language to manipulate and control people.  If you can get a citizen to concentrate on some political issue or conspiracy theory, you can make him forget his troubles - and that perhaps you are the cause of many of his troubles.  And citizens will flock to these "causes" willingly as they want some distraction from the boredom and deprivation of their daily lives (real or perceived).

A friend of mine works for the Pentagon as a Psychologist, and one of his jobs was trying to get inside the mind of suicide bombers.  I think it is not hard to understand what they are thinking - and not hard to recruit or train one.  All you need to do is crank up the Angry Rhetoric ("Death to Israel!  Death to the United States!") and then just look for an imbalanced individual.

The rest, as they say, is easy as pie.  Load him up with guns or explosives and send him (or her) out into the world like a windup doll.


In the Middle East, there are no shortage of people losing their minds - particularly in countries where poverty rates are staggeringly high.  Throw in a fundamentalist religion that makes everyone have feelings of self-loathing, and you've got yourself a suicide bomber factory.

I told my Pentagon friend that I would not be surprised if a lot of the suicide bombers were closeted Gays and Lesbians.  After all, in their world, they are viewed as pariahs, suitable only for hanging and stoning to death - not even human beings, really.  If they try to live their lives as themselves, they will face only reprobation and ostracism - if not violence and death - and bring shame and burden to their families.

The suicide vest, in contrast, seems like a viable option.  Not only does it cater to their low-self-esteem, self-loathing, and suicidal impulses (created by the very culture that is exploiting them) it will, instead of bringing shame to their family, bring honor.  Families of the "martyrs" are honored and lauded, and also given fairly large sums of money ($50,000 or more).  And of course, the martyrs themselves are promised seventy-seven virgins in paradise - the gender of which is not specified exactly.

We expect that sort of angry rhetoric from terrorists and other deranged political operatives such as Kim Jung Il and Mahmoud Ahmadinejad.  But when we lower ourselves to that level - taking the discourse on simple economic issues and casting them in terms of "revolution" and "overthrowing the government", "targeting" and "reloading" then we need to stop and think about where we are going.

It would be ashamed to see our great country disintegrate from within over something as silly as a debate on health care and who will pay for it.  No side will win through revolution, succession, terrorism, or violence.  All such actions would do is create economic chaos and plunge our country into severe depression for decades.  Is the debate on health care coverage worth destroying our country?

Think about this carefully before you start spouting words like "revolution" or "succession".  What would be the value of your 401(k) in a country plunged into civil war?  The value of your home?  All would be chaos and destruction, and the very things you cherish most would be lost forever - home, friends, family, country.

The health care reform act will be modified - parts seem certain to be overturned by the Supreme Court.  Other parts will be tweaked and modified by a cooperative Congress and White House.  No dire threat exists to the Country as a whole.  Debate the issues - rationally, thoughtfully.

But think long and hard before you throw gasoline on the fire.  Any jackass can burn down a barn.  It takes real skill and hard work to build one, though.
Newer Post Older Post Home