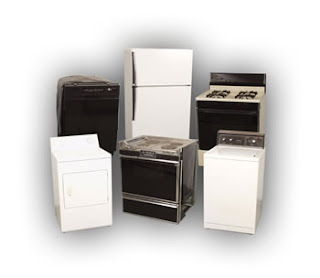 Used Appliances can be a good value.  But like anything else, you have to shop carefully.
As I noted in my Used Tires posting, buying used tires is rarely a good bargain, as the cost of mounting an balancing the tires often exceeds the tire cost.  And moreover, since tires that are "halfway worn" are about 3/4 worn out, they don't have much service life left in them.  And many used tire sellers have fantastic ideas about how much they are worth - often pricing them at or near the price of new tires.  And like a lot of scams, such used tire dealers often are located in poor neighborhoods and exploit the poor.

But oftentimes, homeowners have used appliances they are trying to get rid of, which they will sell cheaply, and are often a good bargain.  The local pennysaver or Craigslist may have such bargains, if you shop carefully.  But again, beware, as a used appliance dealer may post an ad, posing as an individual, trying to get you to go to their showroom.

The thing to bear in mind about appliances is that they are designed to have a service life of about 10-15 years.  So a 10-year-old refrigerator is no real bargain, as it is nearly worn out, even if it is presently "working".  And appliances with a lot of moving parts - like washers - are pretty shot by that stage.  If a washer starts leaking, chances are, its time on this planet is short.

So never buy a used appliance that is old - just as you should not bother buying used tires that have less than 3/4 the original tread.  They won't last long, and the cost and hassle of installation is simply not worth it.

On the other hand, there are people who remodel their kitchen and want to change from white appliances to stainless steel, or whatever, and thus have a fairly new appliance they are selling for cheap.  For example, a neighbor in Alexandria decided to go "all stainless" and tear out their kitchen.  They had just bought, a year before, a brand new Frigidaire dishwasher.  Our dishwasher was broken.  They sold us theirs for $75, which is less than the cost of even one service call on the old dishwasher.  We saved several hundred dollars on that deal.

Similarly, we bought sets of GE washers and dryers for $200 a pair (which is a steal) and then just tossed them when they started leaking years later (the dryers outlast the washers, it seems).

But of course, in order to make such a bargain work you need two things.  First, you need a pickup truck, or at least a friend with one, so you can transport these large objects.  Second, you need to have the expertise and strength to install the appliance and hook it up.  If you can't do these two things, then chances are, the whole deal won't work out for you.

So, you say, you don't have a pickup truck and can't wire a dishwasher or hook up a gas line on a stove.  What then?  I would suggest buying a new appliance instead.  If you are going to have to pay for delivery and installation anyway, you might as well buy a new appliance, as the delivery and installation will be less a percentage of the overall cost than with a used one.

So yes, there are bargains in used appliances out there, but you have to be handy, and you have to buy them directly from homeowners who are selling them for cheap, as they are cluttering up their garage.  Otherwise, a used appliance is no bargain at all.
Newer Post Older Post Home