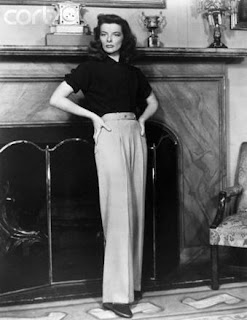 Emotional Energy can be squandered in a number of ways.  Just deciding what to wear in the morning can be exhausting!  If you wear the same thing every day, that is one way of simplifying your life.

Never squander your emotional energy on anything that is not productive to your personal life. What do I mean by this? Well, consider the example of Katharine Hepburn. According to one biography, Ms. Hepburn kept a closet full of identical clothes in her bungalow in California - tan khaki pants, knit shirts, and pairs of loafers. She wore the same outfit to work every day. As she explained it, Most people, when they get up in the morning, waste half their emotional energy of the day just picking out their clothes. Since she was going to go into wardrobe as soon as she reached the movie studio, why obsess over what to wear?  And if she was going to some glamorous studio event, the studio would provide wardrobe for that.  Why be a clothes horse?

And you know, she made that simple wardrobe look pretty good.

Hepburn's example is interesting. As a former law-firm lawyer, I can attest that one of the least enjoyable aspects of the job was scrambling to find something to wear every day - a suit, clean shirt, tie, and make it all look good, but yet different that what you wore the day before. For women, this task is even 100 times more difficult. By the time one gets up, gets showered and shaved, dressed, and commutes to work, half the energy for the day has been exhausted.

Hepburn also saved energy in the area of finances.  Rather than squander her money like most Stars, such as Joan Crawford did, and then spend all day worrying about how to pay the bills, she had her studio salary sent to her Father, who was a successful Doctor and someone she could trust.   He invested her money and then sent her an "allowance" to spend, which in turn freed up her time for more productive things than worrying about clothes and money.

Now, I'm not suggesting you send off your money to your Father, but only that you may want to look into ways of limiting the amount of emotional energy you squander every day.

Living the debt lifestyle, for example, uses up a lot of emotional energy, as most debtors walk a tightrope from week to week, juggling payments and worrying about debt.  It consumes a lot of energy that is needed for your job or career.  Since your career suffers from worrying about debt, you end up not getting that promotion - or worse yet, get fired, leading to more problems yet.

We have a simple arrangement in our home that saves us both a lot of emotional energy.  I manage the money, freeing up my partner to use that energy to work on other things.  He picks out clothes for me to wear, freeing up energy for me to use to manage our money.  This is one of the great aspects of a healthy and productive relationship - where each partner has skill sets in different areas that compliment one another.

It is a shame that in many relationships, competition, not cooperation, dominates.  Each partner has their own checkbook, their own financial affairs, and their own wardrobe concerns.  It is not a marriage, so much as it is two single people sharing a house.

And unfortunately, dating sites like eHarmony and the like keep selling the wrong idea that the best matches are found between people with similar interests, as opposed to people whose interests would compliment each other.

I wonder how Tracy and Hepburn would have scored on an eHarmony test?  I suspect they would have been listed as "not compatible".
Newer Post Older Post Home