Is Spendthrift Behavior Learned or Inherited? 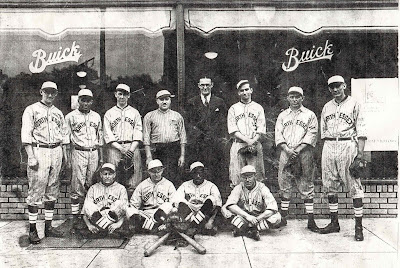 Is spendthrift behavior learned or inherited?  It may be a moot question.  But it does make one wonder.  Some of us, it seems, love to spend money - spread it around, buy a round of drinks for the boys, buy a flashy new car, a new suit -show off, in short.  My Grandfather Bell in front of the North Essex Buick dealership with the dealer-sponsored baseball team.


My Grandfather, who died before I was born, was apparently a party boy, at least from what little information I could get out my Dad.  My Father never said more than four or five words about his Dad, which in and of itself speaks volumes.

Grandfather liked to drink, of course, being of Scotch-Irish descent.  He met his wife, my Grandmother, in a speakeasy in New York City, or so I was told.  My Dad said that he was a good-time Charlie, always putting on parties, picking up the tab, and never putting much money away.

He spent a good portion of his life in the military - in both WW I and WW II.  Supposedly, he re-entered the military when he was booted out of the partnership he and his Brothers had, in a Maxwell and later Buick dealership in New Jersey.  That is the story I was told, anyway.  We never met many of my Dad's cousins on that side of the family, nor were they discussed very often.

My Grandfather died very early, of lung cancer, in his late 50's.  He left very little in terms of an Estate.  His wife, my Grandmother, had to support herself for the next 40 years, working as a schoolteacher or retired on a pension.  My Father's only inheritance was a worn-out old Buick that belonged to his Dad.  I think he was a little bitter about that, from the way he said it.

Granddad was a spendthrift, it seems.  He never put aside money for the future.  Why was this, and is it an inherited or learned behavior?

Part of the difficulty, of course, would be his drinking.  Again, the details are sketchy, but he was apparently a prodigious drinker, which may have been one reason he had an apparent falling-out with his Brothers over the dealership.  Again, in one of the few cryptic comments my Father made, it was inferred that the other Bell Brothers didn't feel that Granddad was pulling his weight.  So he was booted out, and he re-joined the military in order to support his family.

Mental health and financial health are closely related, as I have noted time and again.  It is very difficult to put your financial house in order if you are not living in reality most of the time.  And being drunk or on drugs is one sure way to alter reality.

Alcohol can be an insidious trap, financially.  I have met many working-class people who cannot control their alcohol consumption, and I've seen many working men "stop off at the bar" on payday, cash their paycheck at the bar, and hours later come home with nothing but a few crumpled bills in their wallet.  And yes, when I was younger I even did that myself, once.  Once - and I learned a valuable lesson there!

So, if you have an uncontrollable drinking problem, you will tend to have financial problems.  And financial worries and woes tend to lead to more drinking, which thus feeds-back the system towards instability - what most folks call "A Vicious Cycle" - except that such cycles do not go on forever.

My Father was more financially responsible - up to a point - than my Grandfather.  But while he managed to put away enough money (and come into a small inheritance from my Mother's family) for a comfortable retirement, he certainly wasn't as wealthy as he could have been.  Our family squandered a lot of money on status items over the years, to be sure.  And much of it in private schools and expensive colleges - which did not produce lucrative careers for any of the children.

When I was younger, my lifestyle followed that of my Grandfather, for the most part.  I was a party boy, from age 13 to 25, spending money as fast as I made it, usually on beer and marijuana.  Getting totally blitzed was usually my main priority during that part of my life.  Having a job and making money being merely mechanisms to pay for that priority.

And for many people, this pattern continues throughout life.  Is it learned behavior or inherited traits?  To some extent, I think, both.  Alcoholism and drug abuse were (and are) certainly popular sports in my family tree.  And of course, using alcohol or drugs as a crutch is often done to escape from the immediate circumstances one is in - such as being in an out-of-control alcoholic family.

The turnaround for me came at age 25 and came very suddenly.  I realized, after one particularly booze-filled family fiasco, that I could not change how my family was, but that I could change how I was.  And also I realized that so long as I was a boozer and pot smoker, I would never have my own resources to rely on, and thus would be perpetually beholden to parents and family members for handouts along the way.

And as I noted in both the Parent Trap and Child Trap postings, some parents and children play this game for decades - living in their parents basement, unemployed or underemployed, smoking dope and living on the parent's charity, while the parents secretly enjoy the sense of control, lording over their failed child, and of course bitching about it as a Friend With A Perpetual Problem.

So I gave up the booze and the drugs, cold turkey.  My friends, who were at the time living with their parents, didn't care for this, of course. But I had my own home, a job, and a career, and I realized that if I wanted independence and control in my life, I would have to stop being a child and become an adult.

And it was a process than took decades for me.  As my free-spending habits did not disappear overnight.  Even today, it seems that I learn something new every single day - and that my actions of even a week ago now seem ridiculous.  In a way it is liberating - continually learning and thinking, for myself, rather than blindly accepting normative cues from the television, friends, or family.

So, it is possible to change your behavior which would seem to suggest that spendthrift behavior is not inherited, although perhaps a tendency to be a spendthrift may be.  And if you come from a family of spendthrifts, perhaps your spending behavior may be learned, rather than inherited.

The point is, you are not locked in to one mode of behavior.  Nor are you locked in to re-living the lives of your parents, grandparents, or other ancestors.  And yet, many people I know look to their ancestors as they would to a horoscope - for guidance as to how they should behave in life or as to where their "traits" come from.  But like Horoscopes, Genealogy is really utter bullshit.  And if you throw over what little self-determination you have into a re-living of your parent's lives, then you really aren't living, right?
Newer Post Older Post Home