Companies & Brands to Disappear in 2011? 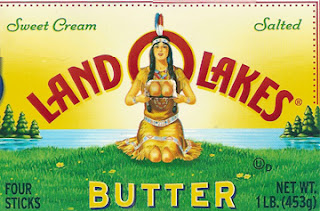 Land O' Lakes, with its famous logo (that can be playfully toyed with) will probably not go away, but the heavily leverage holding company that owns it will likely spin-off the brand.  Quite frankly, though, I switched to store-brand butter a long time ago, as there does not appear to be any real difference in quality or taste.  Nice Knees!

This link explores some companies that may go bankrupt or merge in 2011.  The article makes some good points as to why each brand may go belly-up in short order.

SAAB has lost its raison d'etre a long time ago.  The concept that a small country like Sweden could support not one, but two car brands, was ludicrous in 1970.  Since then, both brands have been sold off (and re-sold) to other companies, with mixed success.

Ford was able to re-position Volvo as a luxury brand, which was a process well under way before they bought it.  The concept of Volvo as a "safety" car for college professors was starting to fade and was not a very expandable market - as costs were rising.

SAAB had a unique product and was arguably ahead of its time - offering front-wheel-drive platforms years before the mainstream makers adopted the idea as anything other than a niche market.  However, the brand lost focus over the years, particularly as GM re-branded various Chevy products with the SAAB name.  Is a Trailblazer really worth $10,000 more because the ignition key is relocated to the floor?

Netherlands car-maker Spyker bought the brand, but with only a few thousand sales per year, it will be hard to amortize the crash- and emissions-testing costs for even a single platform.  And as cars have become interchangeable commodity items (the design has largely matured in 100 years) there is little compelling reason to buy an off-brand like SAAB.  In fact, owning such a esoteric boutique-brand car could be a financial nightmare for any car owner.

Borders is likely to go under, dragged down by debt and a shrinking market for physical books.  There will be a shakeup in the market for books in the next five years - with e-Readers taking over a huge market share (what took so long!) and the idea of a physical bookstore, stacked with copies of books - half of which will remain unsold until marked down - is already seeming antique.  Having a lot of "brick and mortar" stores is not an asset in this day and age, and with their cash-flow problems (they already are not paying suppliers) they cannot afford to go to an online distribution model.

Other companies will do better - being bought out, rather than going under.  Frankly, I was surprised that Frontier Airlines was still in business.  I am dismayed that E*TRADE seems likely to merge, although rumors to that effect have been floating around for several years now.  Perhaps now is the time?

It any of this bad news?  No, although the idiot media will herald every bankruptcy and merger as a tragic event for "the workers".  Companies are like trees, and they need to be pruned or cut down from time to time, when they are no longer cost-effective or viable.  Just as when you prune a tree or bush, it grows back with increased vigor, when we shut down failing businesses, the resulting bounce-back is better for competitors or the merged or sold business.

And yes, I realize this is little comfort for people on the limb being lopped off.  But seriously, though, you never saw this coming?  Astute folks are rarely caught unawares in situations like this.

AVIS, which was supposed to be bankrupt back in February 2009 (I bought at $0.74 a share then, it is trading at over $13 now, and yes, I sold most of it!) seems poised to take over Dollar/Thrifty.  Frankly, I never understood why so many rental car places existed - they all seem to offer the same products at the same prices.  But don't count Dollar/Thrifty out yet - people were ready to write the Obit on AVIS just two years ago, and how times have changed!

The article is not badly written and is from.....AOL.  A company that many folks thought would disappear as well.   Maybe someone there is on the ball again.  Good content sells.  Perhaps AOL can survive?
Newer Post Older Post Home