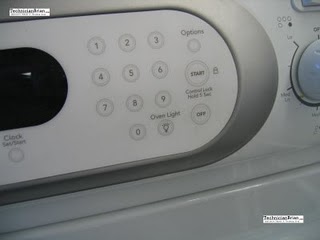 Appliances with membrane switches are prone to early failure.  Avoid if possible!


UPDATE 2018:  Since I wrote this in 2011, a lot has changed in the industry and technology.   For starters, finding a washer that uses switches, knobs, and dials is very hard to do.  And if you find one, it is not that much less expensive than these fancy new machines.  The second development is that the membrane switch is now as antiquated as the dial or knob.  A new generation of machines uses proximity sensor buttons - like the screen on your cell phone - which require that you merely place your finger near them to activate.  No touch necessary!  Yet, some folks still mash these 'buttons' - convinced that more force is better!   No, you'll just break them sooner.

We have had three appliances fail recently, due to failure of Membrane switches.  A Samsung microwave oven started working oddly, then sparked (!!) from the membrane touch panel.  Then our Kitchenaide built-in microwave started behaving very oddly.  Then, to top it off, the "off" button on our Kitchenaide stove started going south as well.

As the links above illustrate, these problems are endemic to the Kitchenaide line (which is owned by Whirlpool and is sold under a number of brands).   But the problem is not limited to Kichenaide by any means,, but to any type of cheap, touchpanel kind of control.

Repairing these controls is out of the question - the cost of the parts alone (often $400 or more) is about half the cost of a new stove.  A service call can easily make the repair more costly than a new stove is, overall.

These types of membrane panels are cheap to produce, and look sleek and modern.  The problem is, they are sensitive to moisture, and for some ranges, particularly the kind with the panel in front, spilled liquids, cleaning agents, steam from the oven, etc. can cause corrosion on the membrane switch contacts, causing early failure.  And since buttons like "OFF" and "START" are commonly used, they tend to fail first.

Consumers "mashing" these buttons often exasperate the problem.  If you own one of these appliances use the buttons gently!  Also, do NOT let water near the keypad and do NOT clean the keypad with any liquids at ALL.  Treat these as the poorly made POS they are, and hope that you can get a few years more out of them.

In our case, all three appliances were about 3-5 years old when the problems started - well out of warranty and even out of what would have been an extended warranty.  Traditionally, a home appliance should last 15 years or more.  Five years of service is scandalous!

Not only that, but the membrane switch problem could be a fire hazard.  Several people have reported, in the link above, that the microwave would start itself, when they were not at home, getting very hot in the process.  Some reported the unit starting with the door open (!!).

Predictably, the appliance companies are in damage control mode.  When I complained to Samsung about our microwave (which sparked and smoked at the membrane control panel) they basically shrugged.  Kitchenaide appears to be taking a similar "stonewalling" line - although I wonder how many burned-down houses they have had to pay for.

For you, the consumer, the best advice is to get a simpler, more basic appliance that does not rely on membrane switches to operate.  While they make look clunky and "old fashioned" the electric and gas stoves of yore never had these sorts of problems.

Unfortunately, it is very hard to find any appliances these days that do not have these types of controls.  And it is sad that you have to spend $500 to $2000 on a stove that lasts only five years or so.

Incidentally, while the "slide in" or "drop in" style of range may look cool, having the stove controls at the front seems to aggravate this problem.  Moreover, it makes it easier for children to access the oven and stove controls.  And finally, slide-in or drop-in stoves cost 2-3 times what regular stoves cost, are rarely discounted, and are often "special order" items.

While a regular, bare bones, stove can be had for as little as $400, a basic slide-in type stove can cost $1500 or more, with similar features.  Slide-ins may look cool, but you pay extra for looking cool!

I guess we will have to go back to cooking over a fire!

These sort of problems illustrate why it makes no sense whatsoever to buy expensive appliances.  If you pay $1500 to $2000 for a stove (or more - it isn't hard to do!) and it breaks, chances are, it isn't worth fixing.  Even the most basic service call and parts will run $500 or more.

A cheaper appliance often has the same "guts" as the more expensive model, but with fewer fancy features and perhaps not the stainless steel panels.  However, when it breaks, you won't be crying as much when you haul it out to the curb.

Note:  As a temporary workaround, we shut off the oven by programming an "off time" a minute from now.  The oven then shuts off in a minute.  With regard to the microwave, we have taken to unplugging it when leaving the home (a built-in microwave should have a plug, usually in the cabinet above, check for this and know where it is, in case of emergency).

We also have been looking at used appliances on Craigslist to replace these.  We found a used GE microwave for $100 that is seven years old.   Another listing has a brand new microwave for $200.  Many folks tear out new or nearly new appliances to change over to stainless steel or to specialty appliances.  Take advantage of their foolishness!

Considering the cost of a new one, or even a service call, this is an inexpensive, stop-gap solution.  And hopefully the membrane switch on this unit won't go South.  Inexpensive used appliances can often be a real bargain - provided they are not too used and they are truly inexpensive.
Newer Post Older Post Home