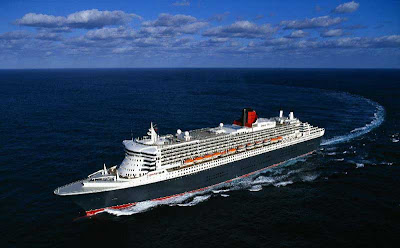 In my last posting on this subject, I listed all the reasons Why I Don't Want to Go on a Cruise.

But those reasons were, of course, just my usual sense of drama - pointing out the pitfalls of any economic endeavor.  Like with my Never Buy a Condo posting, it is better to have a catchy, absolutist title than one that equivocates.  And besides, have you ever met a happy Condo owner?  Of course not.

You can enjoy a cruise on multiple levels, just like you can, say, Branson, Disney, or Graceland.  You can take it at face value, and enjoy it as it is, or enjoy the delicious sense of irony of it all.

The main reason I wanted to go was that I had never been on one, and it is a huge industry.  Millions of people go, every year, and have a good time - or most of them do.  I wanted to find out what the fuss was all about.

But before you spend a lot of money on a cruise, it pays to research it, thoroughly.  Some cruise-junkies like to go every year - or multiple times a year, and know the ships, the best staterooms, the best times to book, the best times of year to go, etc.  Like any other endeavor, the more you educate yourself, the better off you are.

Here is what I have learned so far:

1.  Investigate the smoking policy:  We turned down Carnival as they allow smoking in the rooms, and despite their claims of being able to "clean" the rooms to eliminate the smell, I was not about to sign on for three days of being trapped in a stinky room.  Cigarettes really stink, and the smell embeds itself in draperies, carpeting, and on walls, windows, mirrors, and the like.  I seriously doubt in the few hours they have in port that they can steam-clean every stateroom on the ship.  Carnival gets a "thumbs down" for even trying to perpetuate such a transparent lie.

Royal Caribbean at least prohibits smoking in the staterooms - but allows it on balconies.  For that reason, we decided against getting a balcony.  Why pay hundreds of dollars extra to sit out on a smoke-filled balcony?  And that is what it would be, if your upwind neighbors smoke at all.


2.  Investigate the Overall Cost:  Port fees and taxes have to be disclosed in advance nowadays, but like with airline fares, they are never listed in the "come-on" pricing.  So be sure to check out the overall cost.  Call and ask, before booking.  Other items, like cocktails, and premium dining, are extra, so factor that into your costs and expect to pay another 1/3 on top of the quote price - and then hope to be pleasantly surprised when it is less than that.

3.  Research Your Ports:  All the cruise sites say that the port excursions are largely overpriced.  You do, however, have limited time in port - often only a few hours.  If you think you are going to "experience the Bahamas" on a Bahamas cruise that spends less than 8 hours in two port towns, think again.  But you can have a good time, provided you plan out what it is you want to do.  If you don't, expect to be herded into street filled with T-shirt and trinket shops, which is not really much of an experience.

Our short cruise has an 8-hour stop in Nassau, which is not enough time to see much of anything.  So we are going to check out this incredibly tacky and over-the-top Atlantis resort.  Again, delicious, if only for the irony of it all.  A water-slide that goes through a shark tank.  Why not?  And I am sure they serve Kalik and have a nice beach.

Maybe on a subsequent visit, if there is more time, we could explore the island more, but from what I read about the Bahamas, the best parts are on the smaller islands and remote areas - places better suited for a bareboat charter than for a 1,500-passenger cruise liner.  Maybe we'll do that, next year.  Or maybe not.  The Bahamas is a very conservative culture, and I am not sure my vacation dollars need to go there too often.

Our main goal is to just sit on the beach and enjoy the sun and a cold beer.  And this cruise, which stops for a day at their "private island" promises to do just that.

4.  Start Off Small:  We are taking a three-day, four-night getaway cruise as a starter - to see if we like it.  Going on a seven- or ten-day cruise as a novice, I think, would be a bad idea.  If you don't like it, well, you are trapped on a boat for a week.  And as I noted above, you will spend most of your time on a cruise on the boat itself, and very little time in port.

And speaking of small, pick a smaller boat, if possible.  A 3,000 passenger mega-liner is going to be a nightmare wherever you go, as the population of your boat doubles the immediate population of whatever port town you are in.  I've seen this firsthand in Key West, as the cruise ships disembark, and its like a people bomb went off.

5.  Have Realistic Expectations:  I fully expect the food to be OK, but not spectacular, and most likely bland.  The cabins will be small and cramped.  Most of my fellow passengers will be wildly obese, obnoxiously loud, and eating and drinking most of the time.  It will be like a floating Branson, in short, and there's nothing wrong with that.   You can always enjoy the ironic aspect of it.

Our eventual goal is to go on a more upscale cruise, perhaps in Europe, perhaps a river cruise, which would be more small-scale and relaxing.  But just for laughs, it seemed like it would be fun to try a last-minute cruise.