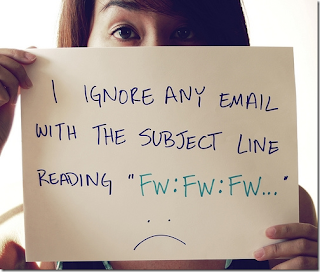 
OK, so we all do it from time to time.  You get a joke that is just too funny.  But some folks, it seems that is all they do - forward one e-mail after another.

And many of them are somewhat insidious - spreading rumors, half-truths, or outright lies.  Why do people do this?  They want to be liked, for one.  They also want to appear to be "in the know" to special or inside information.

So they send you a 'heads up' on the "mall rapist" that doesn't exist, or the latest "suppressed news" that Obama is a Muslim.

But more often than not, many of these forwarded e-mails have links or loads that send the user to Trojan sites or download viruses.

For that reason alone, it is a good idea not to forward e-mails.

And it is a good idea, before spreading a rumor, to check it out first.  www.snopes.com usually debunks these rumors within hours after they appear on the Internet.  And no, just because a rumor has the phrase "I checked this out on Snopes and they verified it is true!" does not mean the rumor is true, as often the statement that they "checked it out on Snopes" is yet another LIE.

Why spread lies and rumors?  Do you really want to be a gossip-monger or rumor-monger?

And eventually, people get sort of tired of these kinds of diatribes and jokes.

Once in a while is fun, yes.  But if you are sending out 5 or 10 of these a day, you should think about getting a new hobby.