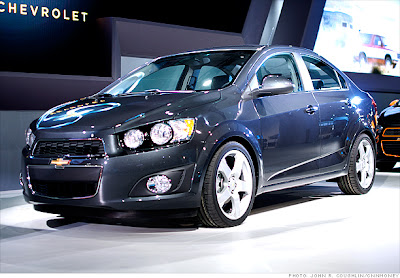 John Delorean once said "It costs just as much to make attractive cars as it does to make ugly cars."  Apparently that bit of wisdom is lost on the new GM.  This replacement for the Suzuki made Aveo has a face only a mother could love.


The new GM stock has finally gone up in value, after languishing as low as $33 a share.  And now the finger-pointing begins.  Did the government sell out too early?  Should they have hung on longer and realized more of a profit?

Playing Monday-morning quarterback in the stock business is like shooting fish in a barrel.  Yea, we all should have bought Microsoft back in 1983 or whatever.   It takes no genius to say "Gee this stock went up in value, in retrospect, I should have bought it!"

But for the long-term investor, you need to look for long-term results, not a price spike after one quarter.  While GM stock has gone up, so as the rest of the market, in the last three months (which is gratifying, unless we will see in retrospect that today was the day we should have sold, before the "big crash" of 2011).

And the long-term future of GM is the real question.  Can they shake themselves of the trailer-trash middle-America, Michigan mentality that pervades the company?  While people in Michigan might think that a Dale Earnhardt signature-series Monte Carlo is the cat's ass in the Chevy Showroom, the rest of the country thinks otherwise.

Things like Impalas, Malibus, Buicks, and the like just don't appeal to most Americans.  They are blandly styled cars, marked only by gaudy faux chrome trinketry.  GM is coming up with some better styling, to be sure.  But it is hardly on the level of Hyundai, for example, which hase been turning out stylish and well-made cars, even if they are knock-offs of previous generation BMWs. 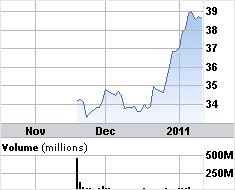 GM's stock has gone up several dollars a share - almost 15%.  But for how long?  The real problem, as I see it, is that the Treasury department sold only half its interest in GM.  It still holds a huge chunk of GM stock, and it remains to be seen when they decide to sell that other half.  When they do, dumping that amount of stock on the market will surely depress prices.
Newer Post Older Post Home