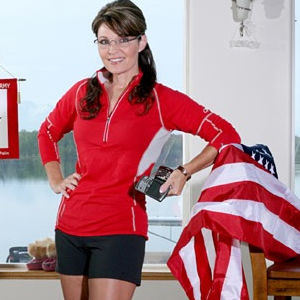 Political Junkies on both the Left and Right love discussing Sarah Palin endlessly.  What outrageous thing did she say today?  But in Reality Land, most normal people see that she is little more than a media star at this point, and not a political star.  Political Junkies cannot distinguish between the two, of course.


Political Junkies - they annoy the snot out of you.  You try to have a conversation with someone and in a matter of minutes, they twist it around to their personal political beliefs, usually odious ones from the far right or far left.  It sort of goes like this:

You try changing the conversation, but it never works.  Everything is either Obama's fault (if they are Righties) or the fault of the "Evil Corporations and Wall Street Fat-Cats" (if they are Lefties).

So what's wrong with folks like that?  After all, isn't everyone entitled to their opinion?

Well, Yes and No.  The problem with the Political Junkie is that they take a good thing too far.  And as a result, they end up alienating friends and family, co-workers, and employers.   And since they blame their personal problems on politics, they fail to take action in their lives which would save them money and advance their own lives.  They sacrifice their own lives on the altar of politics, to little or no effect.

How do you spot the political junkie?  Here are some indicia:

1.  At parties, they spend most of their time talking politics.

2.  They have one or more bumper stickers on the back of their car, usually with cute catchy slogans, often mocking the opposition  (e.g., "Fire Nancy Pelosi" or "Fight for a Livable Wage!", etc.).

4.  They blame their personal woes on political movements.

5.  They spend a lot of time mocking the opposition; much of their "deep political thought" amounts to little more than broad stereotypes about the opposition or name-calling.

6.  They talk only to people who agree with them and assume that everyone agrees with them.  When they encounter someone with a differing opinion, they do not discuss the issues, but usually start a fight or walk off.

7.  They view anyone with an opposing political view as an enemy - personal, or of the country.

8.  They view the world as two opposing political views - one good, one ridiculously bad.

Note that I am not being kind to either "side" on this "debate".  People who spend all day long listening to right-wing talk radio are wasting their time as much as far-lefties and their crackpot world views.

How is this sort of behavior harmful to an individual?  Well, to begin with, it drives away friends and family.  But more importantly, it makes it harder to get a job.  When you start bringing up your crazy conspiracy theories or political views during a job interview (and I've seen it happen) employers edge away.  They don't want to hire someone who seems like a sure candidate for "bring your gun to work day."

And yes, this extreme sort of political obsession is really a form of mental illness - from mild to wild.  Crazy people often obsess about politics, and the people who push this sort of obsession are a little crazy themselves, whether mild (Keith Olbermann) or wild (Glenn Beck).  And yes, disturbed people often latch on to this heated form of political "debate" and end up acting out the violent fantasies promulgated by their proponents.

Worst yet, these sort of political obsessives end up making a lot of really bad financial decisions.  For example, as I noted before, one of them I knew got sucked into this tax protesting gig, and like Wesley Snipes, ended up in some serious legal trouble.   But before they finally caught up with him, all you could hear from him was "I don't have to pay taxes" and "It's all a big conspiracy."  A better approach, in my mind, would be to take all that emotional energy and put it into managing your own affairs, working harder, and saving money.  Death and Taxes are inevitable, no matter how many seminars you attend or kits you buy.

But that is the problem with the political junkie.  They are the quintessential weak thinkers - people who think that Congress can repeal the law of gravity or pass a law making Pi equal to three.  These are the sorts of people who believe Huey Long when he claimed that Government can make "every man a King" without work, without productivity - through sheer magic.

And this sort of weak thinking exists on both sides of the political spectrum.  Lefties think we can just pass a law and make everyone rich - that by handing out cash to the "poor" we will make them "rich" and solve social problems.  And many of them harbor neo-Communist or neo-Socialist beliefs, than if only the government took over industries and ran everything, we would be living in a Socialist paradise.  And yet, they ignore the ample evidence to the contrary.

On the right, the belief is that the Government is the source of all our troubles, and if it were only abolished, the benevolent Corporations would create an unheard-of prosperity in the US, making us all billionaires.  And we'd be free to discriminate against Blacks and Gays and chase our Secretaries around the desk, just like the "Good Old Days".

But of course, what both sides fail to see, with their Utopian blinders on, is that while they are pining for a future world that will likely never come to fruition, we are already living in a world that is, well, pretty darn nice.

Yes, our country has its share of troubles now and again - always has, always will.  If you get your world-view from TeeVee, you'd think we were teetering on the brink of collapse.  Funny thing, though, the TeeVee has been selling that story since I was born.  Either we are taking a good long time to collapse or maybe the TeeVee is lying?  I am inclined to think the latter.

You can obsess about politics and how awful things are because we don't live in a "perfect world".  But as I have noted again, Life is Not an Optimized Event, and we, as humans, operate at an efficiency level in the single digits - on a good day.  You can wail and moan about how perfect things would be, "if only" we could balance the budget or vote the other party out of office, or cut welfare spending, or tax those evil corporations, or whatever.  But here's a reality check:  The art of politics is the art of compromise - getting done what you CAN get done, not holding out for all-or-nothing.

The only political movements that claimed to get all-or-nothing end up failing miserably.  Fascism and Communism never worked simply because there was no opposition to compromise with - to steer policy on a more neutral course.  You have to be careful what you wish for - an extremist solution usually never works.

For example, some people on the Far Right say we should abolish welfare and get all those "Welfare Queens" off the rolls.  Welfare Reform is a good idea, to be sure.  But abolishing it?  Think of the millions of people put out on the street with nothing - it would be like living in a third world country.  And guess what?  Those millions of people would find ways to make money - usually involving taking some of yours, in one way or another.

Many on the Far Left want to eliminate our Capitalist system, arguing that it is unfair to "the workers" who labor all day long so that "fat cats" can obtain their evil "profits".  Yet, time and time again, attempts at nationalizing industries or centralizing planning have been shown to be a disaster.  With no motivation to succeed, people simply don't work as hard at anything.  And the results can be devastating - from long-term recession to mass starvation.

It is clear that if either extreme "won" any political victory, the loser will be not the opposing party, but the great majority of the American people.  Political stalemate, in many regards, is the best solution in most cases.  And America has been a political stalemate for much of its 200+ year history - and worked out just fine.

So don't worry about politics so much.  Your vote counts, to be sure.  The money you donate to a candidate counts even more.  But boring people at cocktail parties with your odious political views really accomplishes nothing.

Put that energy to better use.  If you think your personal woes are due to "Obama" then you need perhaps to balance your checkbook more often and consider your personal situation in terms of how you are culpable for how you got here.  Because we all make mistakes in life, and it is easier to pawn them off on distant national figures.  But that is just weak thinking at its worst.
Newer Post Older Post Home