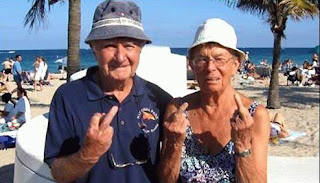 It is puzzling to many why young people, in general, are more liberal than their older counterparts.  But the difference between liberal and conservative has more to do with your attitude toward change.

For example, the Fed, right now, is trying to create inflation by buying up its own debt.  They argue that inflation will spur consumption, as people will "buy now" rather than wait until later and pay more.  It is a pretty specious argument, I think.

If you are the type of person who is in debt and buys everything "on time" then inflation is good news to you.  As prices rise and the dollar devalues, you are paying back your debts with dollars that are worth less than the dollars you paid the debts with.  The consumer goods you bought with those debts are arguably worth more, so you have less depreciation, for example, on your car.

On the other hand, if you are the type of person who saves their money and builds up a nest egg, well, inflation sucks - as it can wipe out your savings in short order.  Hyperinflation can take you from millionaire to broke, almost overnight.

The demarcation is clear:  People who have a lot vested in the system tend to be more conservative.  They've been playing the game by one set of rules and don't want the rules changed in the middle of the game, lest it upset their carefully laid plans.

People who live for the moment and don't invest a lot of time and energy in getting ahead don't mind seeing change, particularly if it bodes well in their favor.

Of course, the terms "conservative" and "liberal" in this country are so distorted and wound up around emotional issues, that their meaning has skewed considerably.

As you get older, generally change become scarier, as extreme change can alter your well-laid plans.  You no longer have earning capacity, and thus you cannot "change with the times" if conditions change.  So many older people fear change, even social change, as a threat to their established hierarchy.

Think about it - if you are old and retired, your only source of power in your life is your income from savings and social security.  Talks of cuts to social security as well as noodling with our fiscal policy are enough to make you wet your pants - even if you are not wearing Depends.

There are other reasons as well.  Far-Left ideas have much currency with the young, as most young people have not had time to think about or see the consequences of such ideas - which may be high-minded, but can have devastating results when put in practice.  It may seem like a good idea to "share the wealth" when you are 21 and broke.  But as you get older, you realize that handing out money to the poor doesn't solve their problems - for very long.  And moreover that it is unfair to others who work for a living.

And far-left ideas are often fashionable among the young, as well. To many young people, particularly of college age, taking up a banner or cause is more of a social statement - a means of joining a group of adopting a fashion statement, than a real commitment to say, Socialism.  And not surprisingly, a lot of this second type tend to drop far-left causes as they get older.

So it is not surprising that people become more conservative as they get older - they have more invested in the status quo.  And as a country that is, on average, getting older and older, our nation is becoming more and more conservative.
Newer Post Older Post Home