A Question for All You Flag-Waving Superpatriots Out There... 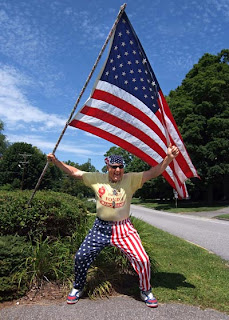 Why is it that people who claim to be " patriots"  are always the first to say America is kaput?  I have more faith in Democracy and our country than they do!
These days, in the idiot media, there are no shortage of people claiming to be super-patriots.  Glenn Beck gets all weepy about "his country" (mine too!) and how it is going to hell in a handbasket because of some chalk drawing he made.

More to the point:  ARE YOU REALLY PATRIOTS or TRAITORS?

You see, this country has been though much, much worse and survived.  During the war of 1812, the Capitol was burned to the ground.  We survived.

We had a Civil War that killed more people than all other wars we have been in - combined.  Neighbor killing neighbor, brother killing brother.  We survived.

We endured institutions like slavery.  We prevented half the population from even voting, until less than 100 years ago.  We survived.

Our entire economy collapsed - in a manner than makes today's "troubles" look like patty-cake.  Some called it the end of Capitalism - others called for anarchy and revolution - but we survived.

Half our Navy was sunk by the Japanese - and we bounced back and took on the Axis powers - and won.  And we survived.

We were locked in a Cold War for half a Century, were reduced to a stalemate in Korea and an embarrassing retreat in Vietnam - and survived.

And since then, we've endured hostages, bombings, the 9/11 attacks and yet another recession - and survived.

All of this hardship, difficulty, trial - and America has survived it all, bounced back, stronger than before.

And yet, you "Super-Patriots" are convinced that a health care bill whose major measures will likely be invalidated by the Supreme Court or overturned or modified by subsequent Congresses, is going to Destroy America?

How can you claim to be Patriots at all, when you have so little faith in our Country?

The world is not coming to an end.  The recession is ending.  Unemployment will drop down.  Life will go on.  The health care bill is not the end times.

And you will look foolish when gold drops to $800 an ounce.

Maybe then, you will stop listening to self-proclaimed "Patriots" like Glenn Beck and realize that they are not Patriots at all, but Traitors - people trying to undermine our Country and our Democracy.
Newer Post Older Post Home