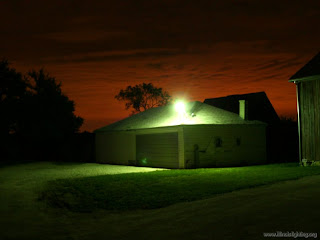 Many folks put commercial lighting fixtures like this on their homes, drawing 300 Watts or more, and creating an ugly ambient lighting effect.


As I noted in an earlier posting, my neighbor and I were comparing utility bills and noted that his is nearly double mine.  Keeping the thermostat to reasonable levels and wearing appropriate clothing is one way to save energy.  Many folks, particularly women (due to traditional modes of dress) insist on wearing skimpy clothes in the winter and then turning the heat all the way up to compensate.   It is a lot cheaper and easier to wear warm clothing and turn the thermostat down.  Choices you make affect your cost of living.

Outdoor lighting is another area where your personal choices affect your cost of living, in particular, your utility bills.  For some reason, many folks like to illuminate their house like a gas station, often incorporating commercial halide or sodium vapor lamps, often on the order of 300 Watts or more.  Or, they use a number of 75 watt "floodlights" around the house to keep everything illuminated.

This type of lighting is ugly, to be sure, and attracts hoards of insects on a summer night, usually creating a mess of dead bugs around the fixtures (and cobwebs from opportunistic spiders).  Since the lighting is so unflattering, glaring, and blinding, and because it attracts bugs, most people do not want to sit outside under such lights, and as a result, the lights illuminate nothing.

Walkway lighting, spot-lighting (so-called "vanity lighting" which illuminates the showplace mini-mansion) are also becoming popular as well.  Many folks use one or more of these various types of lighting on the grounds that they make it "easier for guests" at night, or to "deter crime".  However, I think for the most part, these are just obnoxious light pollution and a waste of energy and money.

How much money?  Well let's assume for a typical trailer home having a 300 Watt sodium vapor lamp, or a house with four 75 Watt floodlights, or a typical mini-mansion with low-voltage "eave" lighting, walkway lighting, and "vanity" lighting (as well as the ubiquitous post lamp) totaling 300 Watts, the lighting is programmed to go on from dusk to dawn, or about 12 hours a day on average.

This works out to 3600 Watt-Hours of electricity per day, or 3.6KW-Hours per day.  For an average of 10 cents a KiloWatt-Hour, this comes to 36 cents per day, which doesn't sound like a lot of money.  By multiply this by 365 days in the year, and that 300 Watts of lighting is costing you $131.40 a year - enough for dinner for two at a nice restaurant.

And of course, in many homes, the wattage is much higher - some neighbors have elaborate post lamps (with multiple bulbs) entry way chandeliers,  garage wall sconces, walkway lighting with dozens of lamps, spots, and other fixtures, all totaling 1000 Watts - or more.

Such parasitic electrical loads add up, over time, to the point where your electrical bill edges ever upward.  Like with any other type of budget - be it the Federal Government, your Household Budget, or your Electric Bill, cost escalation occurs in small increments, and savings take a lot of work to scrutinize small costs and savings.  So while a post lamp might not seem like a big energy user, if it just sitting there burning your money and not doing anything in return, what is the point?

I think a better approach, if you are concerned about crime or want safety lighting, are motion-sensor lamps.  These can be purchased for less than the cost of an ugly halide light fixture, can provide focused light, and turn on only when needed - and turn on automatically when you need them.

Traditional outside lights come on only when you switch them on, so when you need light, you have to go inside and turn on a light.  It is far easier to have the light come on automatically when you are outside.  For example, in our home in Virginia, we had one of these on the far side of the garage, and it would come on whenever I went out there at night to get firewood.  It not only saved electricity, but was more convenient.

You can also add these types of motion sensors to light switches in the home.  I recently put one of these in the laundry room (six 40-watt florescent fixtures, or 240 Watts).  The switch was in an awkward location, and we got tired of stumbling around out there.  Worse yet, because of the awkward location, we kept leaving the light on by mistake, which burned electricity and also was a nuisance (we kept having to go there and turn it off, as the florescent fixtures would interfere with the radio).  A simple $8 motion-sensor switch solves the problem, saves electricity, and makes life easier.  Savings?  Maybe about $25 a year, based on two-and a half hours a day of lighting savings.

Not much?  Well, multiply that by the lights "left on" in your house than no one is using, and you could literally save hundreds of dollars a year - enough to pay the utility bill for one month.

So, we don't leave outside lights on, like our neighbor.  If we are expecting company, we put on the porch light.  When they leave, we turn it off.  Our house goes dark as a pocket, while our neighbor's looks like a Casino - all night long.  And yet, he complains about high utility bills.

It is an interesting exercise, and of course, the next step is to look at all those wall-pack transformers we have in our lives.  Owning things ends up costing money, and if you can own less, you pay less and and live more.  Stay Tuned!
Newer Post Older Post Home