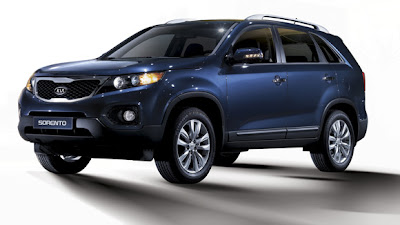 They just built a KIA plant here in Georgia to make the Sorento, which is selling well.  KIA is now part of Hyundai, which sells cars under both brand names.  The vehicle shares many underpinnings with the  Hyundai Santa Fe, which is now made in the same factory.

It is interesting that while GM has shed Pontiac, Saturn, Oldsmobile, and Hummer, and Chrysler has ditched Plymouth (and Ford is slated to dump Mercury) the foreign makers have added brands during this time period.

Each of the major Japanese makers has added an upscale "Luxury" brand - Lexus (Toyota), Acura (Honda) and Infiniti (Nissan) and show no signs of "dumping" brands anytime soon.  In fact, some of these brands, such as Lexus, are for the US market only - the same cars are branded as Toyotas in Japan.

BMW has created its "Mini" line to sell smaller, front-wheel-drive cars that the BMW nameplate would not work for.  VW, of course, has always had its AUDI brand, and Mercedes has introduced its SMART.

While the Americans retreat and retrench, the overseas competition advances.

Having multiple brands when you are losing money, as GM did, is never a good idea - particularly when the cars are all identical and there was no compelling reason to buy one over the other.

Hyundai/Kia offers different cars, not mere clones, so I think the analogy to Plymouth, Mercury, Oldsmobile, Pontiac, and Saturn is not apt.  And unlike some pundits, I don't think the brand will disappear anytime soon, unless they start losing money.

So the retrenchment in brands is really only a US thing, and this is due to the loss of market share by the big-3.  For every brand "lost" in the US, the overseas competition has created a new one.  And these new brands have identities that go beyond "brand engineering".  People actually believe there is a difference between a Lexus and a Toyota, even though they may share a few platforms.

It is a shame that the US car industry has lost so much over the last 30 years.  But the Big-3 have no one to blame but themselves.  When I was at GM, the story told was of a GM executive asking a Californian, "When are you people going to come to your senses and stop buying those funny little Japanese cars?"

And it was a story that had some truth to it.  People living on each coast may derisively refer to the middle part of our country as the "flyover States" - but the folks in Michigan should realize that more than half the population lives on each Coast - and these are the folks buying German and Japanese cars.

In 1979, the assembly plant in Fremont, California was building Cadilliac Sevilles - a car that did not have an audience in places like Los Angeles or San Franciso.  It was reborn as the NUMMI plant, to assemble Corollas and Geo Prisms - as far removed in size and spirit from the Seville as possible.

Maybe in Auburn Hills, a Seville with a landau roof is a hot ride.  But the majority of people in American didn't think so.  And unfortunately, the big-3 never learned much from this lesson, assuming that we would "come to our senses" and all want an Escalade, even if it was just a pickup truck with a metaphorical landau roof.

Reliance on the NASCAR-fan client base to sell cars has hobbled the big-3, as they have painted themselves into a corner - as the purveyors of redneck Bubba cars.  In fact, Toyota's entry into the fray is probably a major error on their part.  Do you really want a Ryan Truex signature edition Camry?  Didn't think so.