Death of the Book Business. 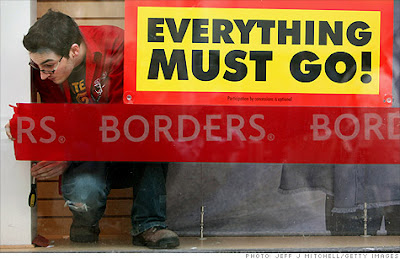 Things are so bad in the book business, they had to hire Harry Potter to help put up signs for Border's going-out-of-business sale!
Borders is having a fire sale - closing 200 stores in Chapter 11 Bankruptcy.  The book business is changing, no doubt.  People are reading less and e-readers will change the nature of the business in the next few years.
For the consumer, the rise of the mega-bookstore has been a mixed blessing.  Most of these large chains have served to put smaller booksellers out of business.  And like fast-food franchises, the large chains didn't sell more variety and greater selection, but rather a more standardized product in higher volume.
So instead of a great diversity of books at Borders or Barnes & Noble, you find the same stuff on the shelves.
The "Bestsellers" are going to be celebrity biographies, or "I'm famous and now I've written a book" kind of deals.  For example, Captain Sully, who heroically landed a plane in the Hudson, writes a book, and then goes on all the talk-shows to promote it.  Great literature?  Hardly.  But everyone who gets into the news for one reason or another ends up with a "book deal" and we, as consumers, are supposed to be salivating to read this ghost-written trash.
Or political tomes - the commentators on the far left and far right put together poorly written books that are little more than extended rants.  These are little more than preaching to the choir, as the people buying these books are not looking for new ideas, but merely validation of their old ones.
The rest of the dreck in these book stores is interesting.  For example, there is always a huge display of coffee-table type books, which usually are also heavily discounted over time.  Most are about cars, airplanes, boats, or Nazis.  These are the kinds of books women buy for the men in their lives.  Lots of photos and short captions or articles accompanying each.
A large bulk of books are written by the same authors and/or cover the same genres - over and over again.  If you can become a "bestselling author" these days, you write the same book again and again, barely disguising the recycled plots.  Whether you are writing mysteries, spy thrillers, or horror, you basically keep writing the same book - over and over again.  Michael Crichton has a new book out.  I'm just guessing here, but I suspect the plot revolves around some sort of computer that goes "haywire" in the end, illustrating man's folly of trusting in technology.  Hmmm... where have I heard that before?  Oh, right, in the 30 other books he has written.
So these sort of "Novels" are like happy meals - they are written at about a 6-8th grade level (or what should be a 6-8th grade level, but what is now considered college level) and repeat themselves over and over again.  They are hardly "great literature" by any means.
The book business has gone the way of the music industry - and the parallels are enormous, as the means of promoting books (the talk show circuit) mimic the payola of the radio business.  And of course, the media conglomerates use their radio/tv/internet/books/movies/etc. to cross-promote their products.
So you become a media star, thanks to a network, then write a book, which is picked up by a publishing house owned by the network's holding company.  It is made into a movie (guess who owns the studio) and you go on the talk shows to promote both.  Meanwhile their newspapers and websites promote you book, then the movie.  And the soundtrack for the movie highlights a new band that is "popular with the kids" and is sold in their captive record stores and hyped on their network of radio stations.
What's not to like?  Shut up and eat your media kibble.
There was, however, a time in this country when books were literature, and you didn't see the same four authors all the time on the bookstore shelves.  A time, when a book was published, the movie rights were not the big deal.  And much of the literature of the bygone era is too difficult for most people to read or fathom today.  Few explosions.  No gadgets.  No hysterical drama.
Of course, as consumers, we do have choices.  We can read real books, not hyped mega-star authors or media darlings.  And the best news is, you can do this for free - at your local library - which is the subject of my next posting.
Newer Post Older Post Home